? Good news! The director of The Incredible Hulk movie says that Bruce Banner transforms into the Hulk within the first three minutes of the movie, as part of the “more action” mandate. He also talks some shit about the design of the Abomination, which isn’t interesting, but I did find this goofy:

“We pick him up in the movie when he’s in Brazil and he’s trying to keep the monsters at bay, literally. Both the monster inside and the army chasing after him to harness his monster ? to create a supersoldier. So he uses Brazilian jujitsu and yoga and meditation techniques to keep the monster inside of him. And, also, if someone picks a fight with him, he’s using that Brazilian jujitsu because jujitsu and aikido are more elusive martial arts ? he’s deflecting the blows so he can run away and not get involved.” 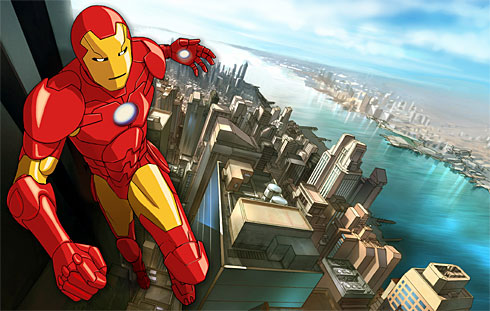 ? That Wolverine and the X-Men cartoon where Wolverine, despite being a rugged loner who hates authority, starts leading the damn X-Men? It’s going to air in 2009 on Nicktoons, sez USA Today. More importantly, it’ll be joined by a new Iron Man cartoon (that’s it above), where Tony Stark is a teen, and probably not an alcoholic. I’d be pretty impressed if he was, though.

? Marvel is starting its “Secret Invasion” promotions with mug shots of various Marvel heroes as Skrulls, painted by Greg Horn. And for reasons that are unclear to me, they all look horrible. Like old Marvel Trading Cards from 1991. 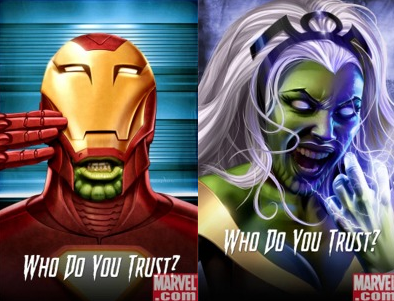 There are plenty more here; Hawkeye is in particular terrible.