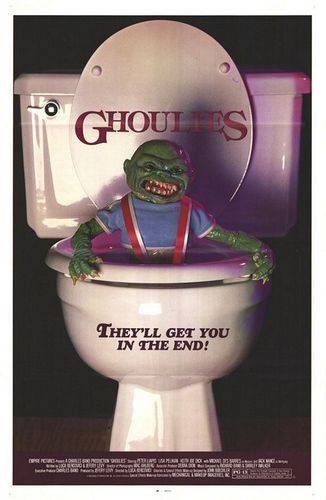 Hard to believe in this day and age, but there was once a time when Blockbuster, Netflix and friggin? DVD dispensers at McDonalds didn?t possess a stranglehold on the movie-rental market. With the VHS/VCR boom of the early ?80s, mom n? pop video stores?rental locations with instantly catchy names like Mega Video, Captain Video and Movies-4-Rent?became widespread as people clamored for home entertainment, and visiting one of these spots was an event. Most children of the ?80s have incredibly vivid memories of hitting up a video store with the parents, along with the movie posters that plastered every inch of the wall.

These posters found ran the gamut from summer blockbusters (Ghostbusters! Indiana Jones!) to some pretty bizarre direct-to-video dreck (Michael Dudikoff Presents Action Adventure Theater: The Bronx Executioner?). But it was the posters for that era?s brand of horror flicks that truly stick out in our minds; many of them presented some gruesome, freakish imagery that weighed heavily on us after we?d left the store, and made for a shitty?s night?s sleep. The irony is that these flicks certainly weren?t classics of the genre; the majority sucked and weren?t even remotely scary! But their promotional materials were able to latch onto unique fears that 8-year-olds have. So with that in mind, here are 10 horror-flick posters from the mom n? pop video store heyday that left us crawling under the covers with our actual Ma and Pa. 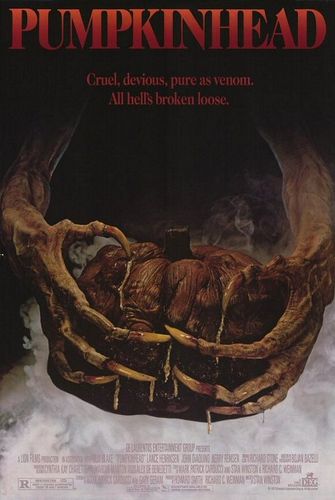 It?s your basic premise for scariness: Take an everyday object and somehow make it ? well, horrific. In a move that had Linus Van Pelt calling foul, the beloved orange fruit (It?s true; look it up!) was used as the basis for a demonic vengeance monster who goes on a killing spree after some teenagers accidentally off Lance Henriksen?s dirtbike-riding brat. The poster is effective on two levels: Not only is the monster left unseen (just those sinewy mitts are frightening enough), but that pumpkin is just flat-out gross. Will Pumpkinhead kill us or make us eat his three-weeks-after-Halloween namesake?! Gah!!!

One of several entries on this list that can really be considered more of a ?dark comedy? than a straight-up splatterfest, the poster for director Bob Balaban?s Parents was cannily deceptive. Let?s say you walk into Sal?s Super Video and immediately notice the presence of one Randy Quaid on the wall. You think, ?Randy Quaid has a new movie out? Cousin Eddie? That hilarious guy from Caddyshack II and Spaced Invaders? Wow, I bet this one will be a real rib-tickler since?HOLY SHIT IS THAT A FREAKING SKULL IN THAT MICROWAVE?! AND THE TITLE?S WRITTEN IN BLOOD?! WHAT THE HELL IS THIS MOVIE?! STOP PLAYING WITH MY EMOTIONS, QUAID!? Dennis would never do such a thing. 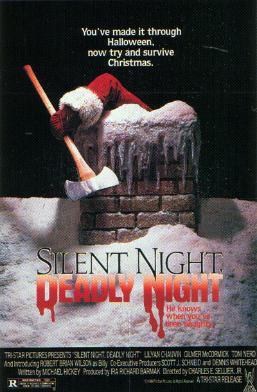 There are plenty of times when as kids, we badgered Mom or Dad about the safety of the house while getting tucked in for the night. ?All the doors are locked? All the windows are locked?? we?d squeak, after which we?d get a smile and a reassuring pat on the head. But in the back of our minds we knew ? the chimney. It?s basically just a tall hole that leads directly outside! Who?s to say someone couldn?t sneak in and cut our eyeballs out? After all, Santa made it inside once a year, why couldn?t someone else? But then we?d banish those notions, convincing ourselves that Santa is a nice guy and really the only one who could get in thanks to magic and all that weird Santa Claus: The Movie crap. But after seeing this poster, we knew?even Santa can have a bad day. A very, very bad day. 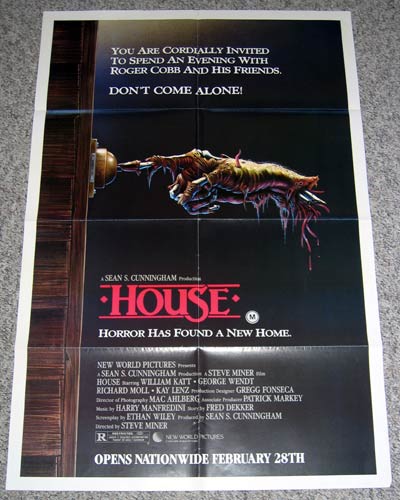 Another sample pulled from the ?Hey, this is a comedic romp AND a scary movie!? genre, that designation was lost on us in 1986. All we saw was a disembodied, zombified hand, and few things are freakier than something that?s large enough to strangle you yet too small to fight off ? and probably has worms and whatnot inching their way through it. And from the title alone, we could easily gather that this was a haunted house, and not like the one at Disney World that Eddie Murphy made into an unintentionally scary movie, rather than an intentionally funny one like House. Hey, you can?t go wrong with the combo of William Katt?s hair and Norm from Cheers. (Cliff Clavin showed up in the sequel.) 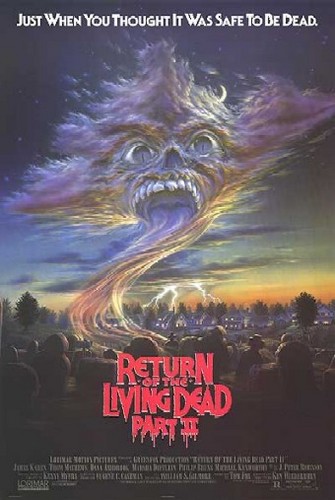 First things first: This poster completely ripped off that of Fright Night, which had appeared three years earlier. But ROTLDP2 used much more visceral imagery, and honestly, not many of us knew just what the hell that creature was supposed to be. A zombie? A ghost? A really fucked-up version of the Luck Dragon from The Neverending Story? Whatever it was, the artist did a pretty fantastic job of rendering those eyeballs?they were the soul-cutting stuff of nightmares. For those of us who actually did manage to grow the balls to screen this one, we were treated to a Goonies-esque plot where a kid and his wacky buddies attempt to curb a zombie infestation. No Cyndi Lauper soundtrack, though ? boooo.

5) The Serpent and the Rainbow 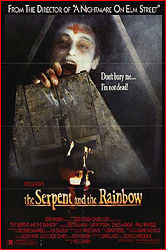 Several confusing and conflicting elements combine to produce poop in the pants. First, there?s Bill Pullman in clown makeup. Knowing nothing about the film, all signs point to him being a vampire?the gaping mouth, the cross on the coffin, etc. But those of us brave enough to study the image further noticed the more chilling touches?his scratch marks across the lid of the coffin, and the tagline ?Don?t bury me … I?m not dead!? So if The Serpent and the Rainbow taught us anything, it?s that there are evil people in the world who will mime your face all up before burying you alive. Amid the vampire and zombie touches found here, there was more than enough to freak you out. And of course, adding to the confusion, the poster features neither a serpent or a rainbow. Discuss.

Predating the release of Child?s Play by several months, the poster for this little-seen George Romero effort was one of the first to capitalize on ?toys can be evil and kill you? imagery. Of course, those who have actually seen this flick know that the story actually centers on a homicidal helper monkey who terrorizes his quadruplegic owner and friends. But that damn cymbal-crashing monkey, with his deranged eyes, barbershop-quartet pants and Clark Gable ears, was scarier than most of the monsters we?d caught glimpses of, and certainly induced a greater likelihood of us pissing ourselves than a doll in overalls, much less a regular ol? monkey with a propensity for injecting scientists with poison-filled syringes.

Laughing already? Go ahead. But you know that regardless of how amazingly crappy Jaws 4 turned out, seeing the poster before ever screening the film was disturbing. It taps into a number of our childhood fears. First, there?s the big-ass scary shark, duh. Second, there?s the notion of being trapped out in the middle of the deep, dark ocean all by yourself. Third, you?re about to face off against a toothy leviathan-esque beast, and all you have at your disposal is a puny harpoon?! (It made it worse that scale-wise, the harpoon was only as big as toothpick.) And since ?revenge? was in the title, you knew that this movie was going to be all about Jaws trying to eat people. Luckily for those of us who had older siblings who taunted us by slipping this one into the VCR, Bruce the Shark?s last effort was a gut-busting riot, and not in the innards-shredded-by-a-sea-predator sense.

Speaking of childhood fears, taken at face value this cheeky PG-13 Gremlins spoof appeared to be one of the freakiest horror films ever made. Creepy little monsters are one thing, but creepy little monsters dressed in kids? clothing cross the line. But the final part of the scare equation came from, yes, the shitter.
The toilet is supposed to be a safe haven. You sit down, you do your business, you?re all by yourself, and no one?s really the wiser. But what if something unseen was lurking in the water below? Needless to say, things could go horribly, horribly wrong. Lots of vulnerable areas when you?re in that position. At least the makers of this gem had the good taste to not have the Ghoulie brandishing a friggin? machete as he emerged from the commode… 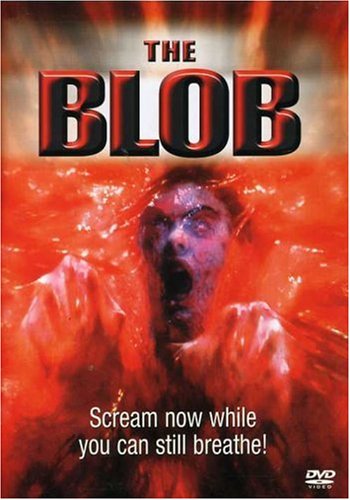 Holy fuck! To this day, that image is still gruesome as hell. But like the Blob?s ability to suck (you in), you can?t look away. The fear of drowning is bad enough, but try drowning in a mass of gelatinous goo while your skin slowly dissolves at the same time. Granted, there were two poster images for this remake?the one above, and a less-unpleasant shot of a blurry woman trapped in a much more ?soothing? Blob. But it?s Unlucky McGillicutty who earns the top spot, thanks to his ?selling? of his consumption so well. Seriously, that shit?s nuts. Hopefully that guy got a Saturn Award or something.

This remake is pretty well regarded in horror circles, and unlike most of the guilty parties on this list, it?s genuinely frightening. There?s a guy who gets sucked down a drain hole by the Blob, and later even an innocent kid gets eaten. So after getting past the poster itself, the film didn?t offer much in the way of comforting hand-patting. Supposedly there?s another remake in the works; here?s hoping they don?t find someone scarier than Goo Guy to promote it.