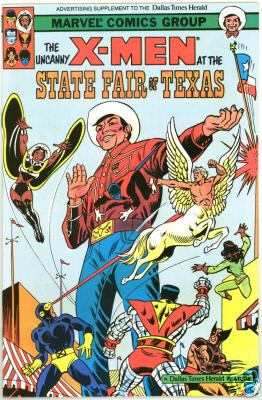 When it comes to free shit, comics are generally celebrated, right up there with ice cream and condoms. But sadly, unless it?s Free Comic Book Day or ?There?s a Longbox in This Dumpster!? Day, floppies starring our beloved characters are primarily used as nothing more than cheap promotional tools. The heyday for such comics was the ?80s, and Marvel was the biggest offender; they had no qualms about loaning Spider-Man to plug Aim Toothpaste or whoring out the Hulk hawk newspapers. Occasionally comic publishers would team with annoying do-gooder organizations, and you?d wind up with Supergirl chastising you for not wearing your seatbelt or Captain America brushing off the Red Skull to battle the even more nefarious Asthma Monster. Regardless, most of the time these crappy excuses for four-color fun were traded out to younger, and far stupider, neighborhood kids for their dad?s old near-mint Avengers issues.

As a salute of sorts to those comics we actually got pissed off at even though they cost us nothing (save our favorite heroes? dignity), here are the 10 worst freebies to ever find their way to a doctor?s office, mailbox or grocery-store aisle.

10) Uncanny X-Men at the State Fair of Texas

Holy crap, early Claremont-era X-Men! Badass, right? Hells no. In what proved to be a lengthy liaison with the Dallas Times Herald, the first of many cross-promotional blow-jobs featured the X-Men traveling to Texas to prevent Magneto from recruiting a kid who turns into a centaur. Yes, a friggin? centaur. And his name?s Eques.

Prepare to be astounded how Nightcrawler tries to ?fit in? with the fair-going crowd by wearing a hat pulled down tightly and flesh-colored gloves over his three-fingered mitts?why, you can hardly tell he?s a blue demon plagued by the stench of brimstone! However, this comic is redeemed by what we?re sure is Professor X?s lone utterance of ?Emergency! All X-Men to the Cotton Bowl!? in all of Marvel lore.

9) The Adventures of Quik Bunny 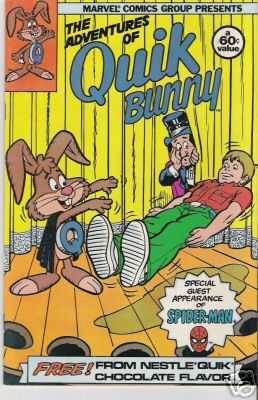 In terms of crappy promo comics, you?d think a whopping 36-page funnybook full of inane puzzles and stories starring the cocoa bean-lovin? Lepus would rank higher on the list, right? Don?t be so fast to judge our Quik-footed friend. After all, this is probably the only time you?ll ever see the Quik Bunny punch a motherfucker out. Yes, it?s as insanely awesome as it sounds. 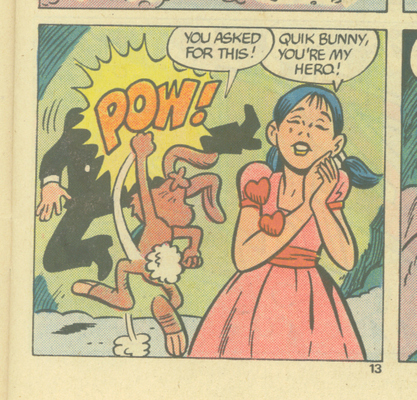 In another tale, an apparently lost Peter Parker stops by some kids? backyard magic party and asks if he can snap ?some photos for the newspaper.? Whoa, Tiger! But the tykes don?t run away screaming, and Pete actually strips to his Spidey duds to help the Bunny locate some missing props from a thieving rival magician. C?mon, that?s what the Nestle lawyers are for!

8) Spider-Man, Firestar and Iceman at the Dallas Ballet Nutcracker 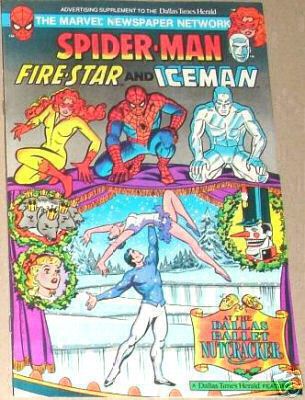 Geez, the Dallas Times Herald again?! Yep, like that old slut and buff young dude on ?Lipstick Jungle,? Marvel and this ink-laden bitch couldn?t keep their hands off each other. In yet another free newspaper insert, Spidey and his amazing tag-alongs are killing time in Dallas to catch a performance of ?The Nutcracker? by the Dallas Ballet. Too bad some cut-rate villain calling himself Daddy Longlegs spoils the fun by, uh, stealing boxes out of the back of a truck. (Continuity alert: D.L. gained his powers of being extremely tall and gangly by drinking Bill Foster?s untested Giant-Man formula. And apparently he was a legitimate Spider-Woman foe.) His motivation? He just wants to dance, people. Cut the guy some slack!

The second half of this giveaway was filled with the Nutcracker story in its entirety; it?s so boring even Aunt May would be tapping her watch (while Daddy Longlegs taps dat ass, natch). 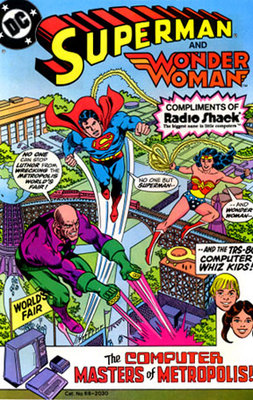 Ah, Radio Shack; we cannot thank you enough for this tedious, ungodly excuse for an adventure. Don?t be fooled by the presence of Big Blue and the Glamazon on the cover looking like they?re about to go Clubber Lang on Lex Luthor. Supes is a bit player at best in this story, as Wonder Woman visits a classroom and teaches a group of students about the amazing new TRS-80 computers. Meanwhile, Superman catches wind that Luthor plans to ?disrupt? the Metropolis World?s Fair. Ye gods, what could that possibly entail? M-80?s down the toilets of the public restrooms? A brainwashed Perry White forced to go streaking? Nah, just some vague threats to destroy ? something.

Basically, if you love reading page after page devoted to the invention of the transistor and the genesis of the silicon chip, this is the comic for you.

6) Captain America and the Campbell Kids 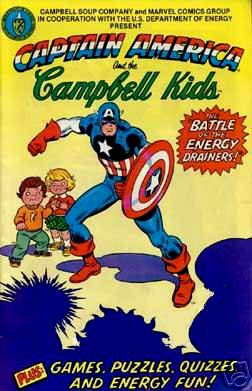 This yarn is a mind-boggler?just what the hell do Captain America, the Campbell?s Soup Kids and the U.S. Department of Energy have in common? Perhaps they?d all feel at home in a Norman Rockwell painting. Regardless, we have to call bullshit here as the Campbell Kids never actually team up with Cap?hell, they?re not even part of the story! They just narrate! And when there?s an opportunity to dress up a freakishly proportioned child like Bucky, you take it! At least the bad guys?Thermal Thief, Wattage Waster and the Doomsday Man?look somewhat fearsome, despite the ratio of retarded to moderately cool names.

You gotta wonder, what kind of tax break did Marvel and Campbell?s get off this? And would Cap approve of such an unsavory screwing of Uncle Sam? 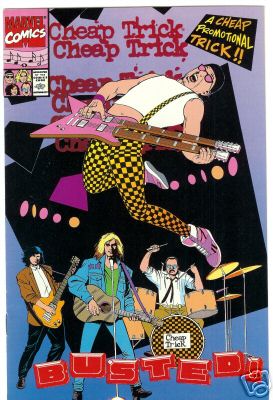 Here?s what you want handed to you at the cash register with a terrible Cheap Trick album that doesn?t include ?Surrender,? ?Southern Girls? or even ?The Flame??a flimsy, eight-page, black-and-white tie-in comic that bolsters the band?s ?origin.? Written by Marvel?s go-to promo guy Jim Salicrup (he?s responsible for all but one of the Marvel books on this list), we learn that guitarist Rick Nielsen?s parents were Ozzie and Harriett, bassist Tom Petersson worked in a fish factory closing sardines? eyes, frontman Robin Zander was some kinda Bond-esque spy, and drummer Bun E. Carlos was an Indiana Jones-style adventurer.

It?s nowhere near as entertaining as it sounds, despite the presence of sexual innuendos out the wazoo. How this rag earned Comics Code approval is beyond us. There must?ve been some ?Can?t Stop Fallin? Into Love? fans on the board. 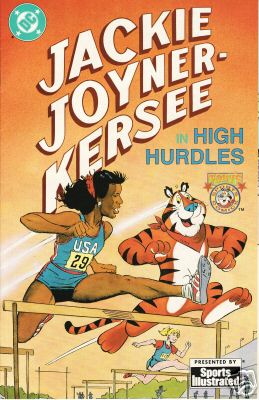 If there?s one thing comic readers aren?t crazy about, it?s sports. Especially a boring-ass sport like running. So when DC Comics teamed with Frosted Flakes and Sports Illustrated to produce a ?feel good about yourself? freebie, did they toss in the Flash? No. Johnny Quick? Hell no. Maybe the Black Racer? No, but life would be so right if they had. Instead their combined efforts brought forth Olympic gold medal winner Jackie Joyner-Kersee?s lone foray into the funny pages. Only there?s nothing too funny here, as poor Jackie was written with the personality of a shoelace. She tries to encourage some random middle-school chick with banal advice such as ?Keep at it,? all while Tony the Tiger mugs in the background. Seriously, the damn tiger?s in nearly every panel, though he?s only given a few lines of dialogue. G-r-r-r-r-r-ab a bench, you dick. 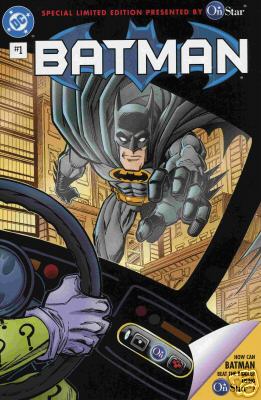 Now this one?s just insulting. Batman, the world?s greatest detective, the guy who?s spent his entire life living in Gotham City, needs an over-priced navigational system in the Batmobile? Isn?t Bats supposed to have all of the backroads and shortcuts of the damn town memorized by now? Jesus.

Worse yet, Bruce Wayniac has to rely on OnStar to help him trump the Riddler. Yes, Edward E. Nigma. DC couldn?t at least toss in a moderately threatening opponent like the Joker or Scarecrow? Hell, even Maxie Zeus would be preferable. Instead we have Batman attempting to match wits with a dude wearing question marks who?s kidnapped Commissioner Gordon. Before it?s all over, Bats is practically crying for help from the OnStar operators as he?s thwarted by a closed tunnel, and Riddler?s goons manage to swipe his ride?leaving the Dark Knight to whine, ?OnStar! The Batmobile?s been stolen! I need you to locate it!? Think, man, think! Inspector Gadget could follow these clues! 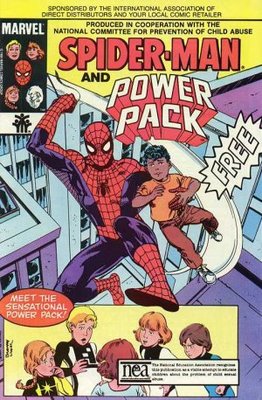 Don?t be fooled by the John Byrne cover?this is no ?80s comic book milestone. In fact, this is arguably the most infamous promo of all time. We?re not gonna poo-poo on the message?child abuse is wrong, yeah yeah yeah. But we will hope that somewhere in the annals of Marvel history, a writer will see fit to ret-con this tale that finds Spider-Man admitting to an abused kid (if having a hot older babysitter make you take off your clothes is abuse) that he had some troubles, as well. What did those troubles entail? Apparently an older high-school jock type at Parker?s school forced him to look at girlie mags and then wanted to get all touchy-feely himself. Needless to say, we were scarred; so much so that we never wanted to talk to old people or even read Spidey comics again. It?s a sad day when a Power Pack story is the preferable half of a comic starring the Web-Slinger. Thanks for making us question our own ?friendly neighborhoods,? National Committee for Prevention of Child Abuse. We?re gonna cry ourselves to sleep now. 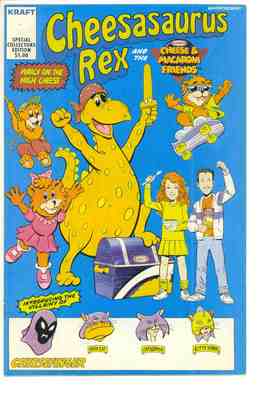 As hard as they tried, neither Marvel or DC could earn the dubious distinction of producing the worst promo comic of all time. That honor goes to … well, we?re not exactly sure. We suppose we could place the blame solely on Kraft General Foods for this atrocity, but the paper stock and coloring is reminiscent of early Valiant comics, so we?ll take this opportunity to piss on Valiant. Indeed, ?Piracy on the High Cheese? is packed with so many elements that make us throw up in our brain, where to really begin? Inconsistent ampersand use in the title aside, there?s scene where a kid named Jeff eats a steaming bowl of mac & cheese and hallucinates his way into ?Oni-Land.? The cast of characters includes an ?extreme? skateboarding anthropomorphic bear called ?Bearacuda? and a villain named Cheesefinger, which sounds like something that would follow a Donkey Punch and then a Dirty Sanchez. The look of fear in Jeff?s eyes on the cover says it all.