Menu
Home
>
Anime
>
Bandai to ADV: “There Is No New Gainax Series Featuring Drilling Robots That You Possess That I Cannot Take Away”

The big anime news from NYCC is that Ganiax’s much anticipated anime Gurren Lagann will finally be coming to America, just not by the company that licensed it. ADV announced the giant robot series at last year’s Anime Expo, but took all mention of the series off its site in January, causing anime fans to freak out. Eventually, ADV returned all the titles except Gurren Lagann to the site, and told fans they the company had all intentions of releasing the series. 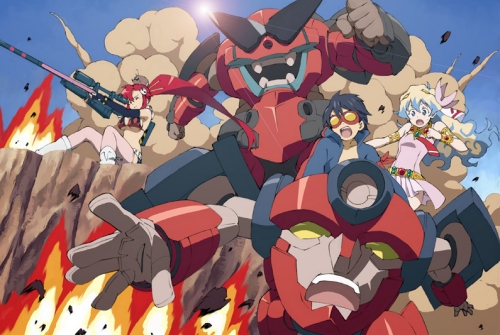 Clearly either ADV was lying to anime fans, or themselves, because Bandai Entertainment announced they had the license to the show at NYCC. There’s no word about when it’s coming, but since Bandai seems pretty stable, I think it’ll probably make it. As for why ADV lost the license, I have two theories?they’ve jumped the gun on announcing a few titles (the recent Full Metal Panic series being one of them), and they might not have ever 100% locked down the deal with Gainax. the second theory is that they are beset with money problems (new money problems, not the old money problems fixed by the Sojitx loan from a few years ago) and could no longer pay the Japanese piper the price-per-episode.

I’m told Gurren Lagann is like a long-form FLCL, which is one of my favorite. I’m looking forward to checking it out if someone sends it to me for free.