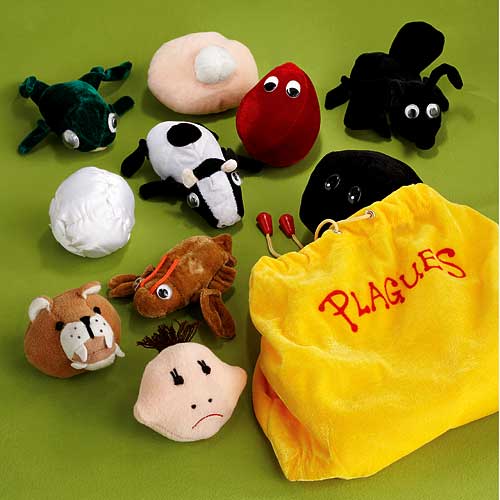 It?s Passover time, the favorite Jewish holiday of people who like to eat a lot. Which is to say, all Jews. If you?ve seen The 10 Commandments you know the basic story: Jews are slaves to the Egyptians. Moses liberates the Jews. Jews get lost and wander the desert for 40 years, which is an awful long time to wander anything, never mind a desert. Now, if you want your children to share in the joy of Passover, what kind of toys could you buy them? If you guessed a plush Moses or a 10 Commandments jigsaw puzzle, those are very reasonable assumptions. But, at least going by the Passover edition of the catalogue ?The Source for Everything Jewish,? (which really is, by the way), the hot subject for Passover toys and candy is not Moses. It?s the 10 Plagues.

Yes, those 10 plagues. The ones that started with the Egyptians? rivers turning to blood and ended with their first-born children being systematically wiped out. Not to take the lord?s name in vain or anything, but WTF? In the interest of public service, I?ve decided to run down the five weirdest, creepiest, most disturbing plague tchotchkes in ?The Source of Everything Jewish? catalogue. So in case you?re in the market for chocolate shaped like a diseased cow or a plush chunk of fiery hail, you know where to look. Warning: There will be blood. And also locusts and frogs. 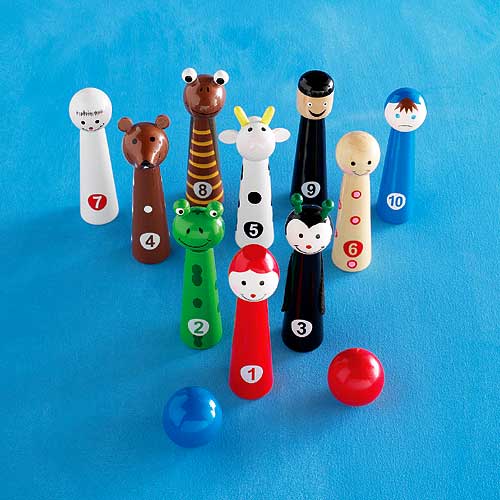 The catalogue copy for this item reads in part?and I swear I am not shitting you people??Just try to pick up the hail?death of the firstborn split!?Hey, God did it, why can?t you? Of all the plagues items the bowling pins in this set are certainly the most serene, despite the double whammy of being plagues and have brightly colored balls bearing down on them. Look at the number 7 pin?have you ever seen a happier guy covered in boils? The number 9 pin?darkness, although he looks more like a cat burglar?looks like he?s having the time of his life. ?Hey, you guys! I can?t see! What?s that rolling sound? This is awesome!? The only one who?s not smiling is the dead baby, but can you really blame him?

Death and mayhem in a convenient travel tote! The real charm of these items is in how they go about representing the plagues that don?t easily lend themselves to plush form. There?s the adorable drop of blood with cartoon eyes, for instance, or the Shard of Darkness (peeking out of the bag, lower right), with its black eyes calling to your children from its cheerful yellow prison. If you?ve ever wanted your kids to embrace the darkness, now?s your chance?literally! It?s plush and huggable. But by far the worst mental image in this grab bag is the boils, represented in this set by a disembodied hunk of flesh with a whitehead the size of a gumball on it. It seems to look a little bit like a soft-boiled egg, only in this case the yolk is really the eggwhite, and the eggwhite is really human flesh. 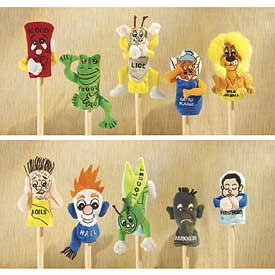 What really sets this item apart is its accuracy. In most of these there?s some degree of interpretation involved??Yeah, I guess that white ball is hail, not a boil.? With these finger puppets, though, there?s no mistaking what?s going on, even without the words written on them. With the possible exception of the blood, who, with his cylindrical shape and dismayed expression?and I?m sorry, it?s unavoidable?looks like a used feminine hygiene product. Oh, and the very pale read-haired fellow who apparently represents hail. And the Al Jolson finger puppet that represents darkness.

But the other seven are spot on! Is there any friggin? doubt that the cow lying in bed with a thermometer in its mouth and a hot water bottle on its head is a cattle plague? Or that the baby with his hands folded on his chest is, in fact, a dead baby? These things are so scary accurate that they had to put a disclaimer in the catalogue copy. And I quote, ?Don?t be scared, children, they?re only make-believe cloth puppets for you to name aloud at the Seder!? Yeah, children! Quit your quaking and come play with your dead baby finger puppet! Wusses. 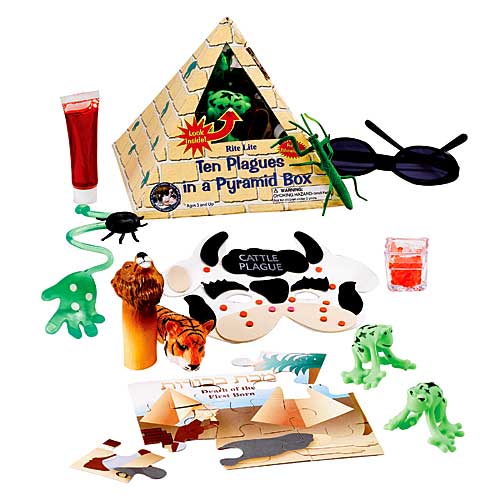 ?Great for the Seders and MUCH more enjoyable than the plagues the Egyptians received,? ?The Source? informs us. Well, I think I speak for every Jewish parent and prospective buyer of plagues merchandise out there when I say, ?IT FRIGGIN? BETTER BE!!!? You wouldn?t much want to give it to your kids otherwise, would you? I?d say we can safely take the relative enjoyability of just about any item in ?The Source for Everything Jewish? catalogue to the actual 10 plagues as a given. 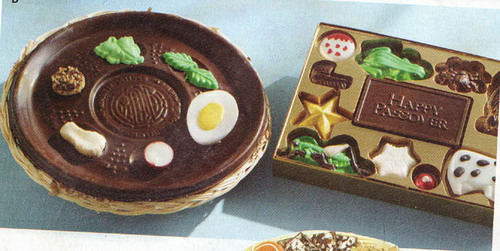 The chocolate Seder plate this comes with looks pretty yummy (and, ?The Source? informs us, ?comes in a reusable basket?maybe like the one in which baby Moses was discovered.? I assume they forgot to add, ??in that we fished it out of a river.?). The chocolate plagues, however, are the opposite of yummy, the opposite of yummy being ?makes me never want to eat again.?

Sure, some of them aren?t so bad. That?s a very attractive gold star, for instance, although I haven?t the slightest idea which plague that?s supposed to represent. The plague of doing well on your spelling test, perhaps? I could even wrap my head around eating chocolate shaped like a frog, or a locust, or a flea, or even a diseased cow. I?ve been in college. I?ve eaten all sorts of wacky things.
Folks, I?m not going to lie to you. I?d even eat the baby basket, if I could convince myself that it was representative of a live baby and not a dead baby inside the basket. Which it is not.

But there?s one plague that I would not eat. See that red cherry cordial-looking thing towards the bottom right? Look again. It is not a cherry cordial. It is a chocolate mother-loving boil. With a whitehead. When I first saw that in the catalogue, I swear I nearly threw up. So now you know the answer to the question ?Why is this night different from all other nights?? On all other nights, if someone tried to sell you $50 chocolates with a chocolate friggin? boil in it, you would severely injure them, and be considered well within your rights to do so.