Menu
Home
>
Daily Lists
>
The 8 Most Insane Things About Super Mario Bros. (When You Stop and Think About Them)

When something?s been around so long that it?s an institution, you tend to accept it at face value. You know, like religion. But sometimes if you really stop and think about things like that, you?ll find that the stuff that?s just second nature to you actually doesn?t make any sense (you know, like religion). Video games are full of this kind of thing; does Link from Legend of Zelda actually have three hearts in his body? Does he steal the hearts from his vanquished foes to replenish his own supply? Do people leave hearts lying around in tall grass? How can people be so cavalier with their friggin? hearts?!?

But by far, the video game with the most befuddling features is the most well-known video game in the world?Super Mario Bros. We?ve been playing it for so long and it?s been ripped off so many times that it never seems weird to us, but if you actually stop and think about the game, it?s a more bizarre acid trip than Naked Lunch. So here are the eight things in SMB that don?t make any sense if you really stop and think about them. Beware?you may never play the game the same way again. 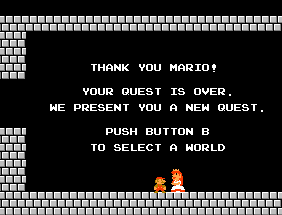 Let?s forget the ?mushroom makes you grow? thing. That?s been around as long as Alice in Wonderland, so it?s not that weird. But how tall is Mario supposed to be? Little Mario is his natural state, right, not Super Mario? I mean, that?s how you start the game. So assuming Mario?s a normal human who?s a little on the short side, let?s say he?s maybe 5 feet tall. So how tall is Princess Toadstool? She?s the same size as Super Mario?what, is she like 7 feet tall? What happens if there?s a Goomba attack when they?re having sex and Super Mario shrinks to normal Mario? Suddenly he?s just this little Italian guy doing it with a giantess. Now that?s a sexual dysfunction that there?s no pill to prevent. 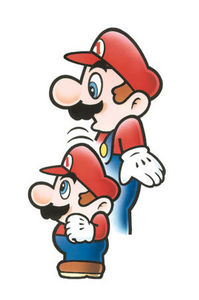 Speaking of shrinking, why does getting hit by an enemy cause Super Mario to shrink? Does a super-mushroom inflate him with some sort of gas, and getting hit causes it to leak out? If that?s the case, does a fire flower ignite the gas and that?s how you can throw fireballs? Sorry if I seem hung up on this. Mushrooms give me gas.

6) There Are Many Tiny Castles… 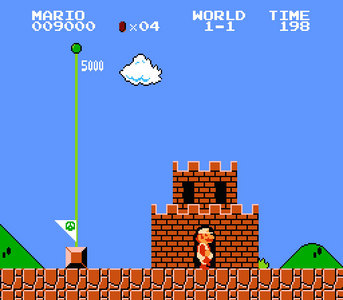 What?s in the little castles Mario runs into at the end of the first, second and fourth stages of any given world? He only runs in for a second, we never get to see what?s in them, and then he immediately leaves to start the next stage. I?d like to throw out a theory?public restrooms. Why does Mario need to use the shitter in a castle in a world where there?s a giant open sewer pipe every three feet? Hey, the man?s a plumber, but he?s got some dignity.

5) …and the Castles Have Fireworks 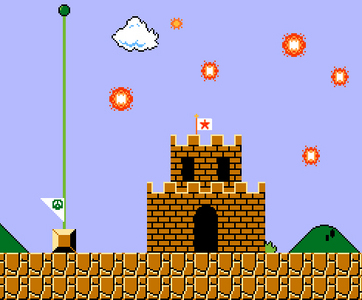 If all the good people of the Mushroom Kingdom are being held captive, who is it who?s setting off fireworks when you finish a stage with a certain number of seconds left of the clock? Is it some guy who?s just a really big fan of the number six? My best guess: It has something to do with whatever Mario?s doing in the castle he runs into. Which, as we?ve already established, is taking a dump.

4) The Stomping Vs. Smashing Conundrum

Goombas are soft. Even little Mario can simply jump on them and they flatten like a little kid stomping on a juice box?though presumably with less juice being expelled. I hope. Now consider that Super Mario has such mighty mitts that he can turn the mysterious floating clusters of bricks that apparently pass as exterior decoration in the Mushroom Kingdom into rubble just by jumping up and tapping them with his fist. So why on Mushroom God?s green Earth does hitting a Goomba in the same way just cause damage to you? Shouldn?t it, I don?t know, make them explode spectacularly? Shouldn?t you at least get your fist lodged up their ass or something? Assuming mushrooms have asses? If that happened, would their little angry eyes get angrier, or would they look surprised? These are questions that bear asking.

The U.S. economy may be tanking, but not so in the Mushroom Kingdom. They?ve got more money than they know what to do with. The solution their Fed Chief (he?s the mushroom in the vest in world 5-4) came up with? Take a large percentage of the budget surplus and suspend it over the ground in big blocks with question marks on them. (The rest of the surplus was put up in the clouds, where it can collect interest.) That?s the only explanation I can come up with as to who set these things floating tantalizingly in the middle of the air, and why. Only sometimes it?s not a giant gold coin you get for completing the strenuous task of punching a block. Sometimes you get a flower that gives you super powers. Sometimes you get a star that renders you temporarily immortal. And sometimes you get a mushroom that enables you to return from the dead. It?s a freaking bonanza! Nothing bad ever comes out of a question mark block. The question they?re asking is, ?Hey, Paisan, want something awesome?? And the answer is always ?Yes.? 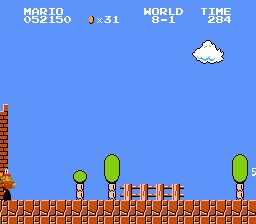 I understand that Mario is on an inexorable quest to rescue his lady-love. On such a quest there is no time for hesitation, and even less room for uncertainty or second-guessing. One must move ever onward to the next castle and the next, hoping against hope that this next one will have a princess in it instead of yet another mushroom bearing bad news. Still, I?ve never heard of grim determination manifesting itself as a physical inability to walk to the left. Maybe if Mario started walking off-screen to the left and a little voice in his head immediately chimed in with, ?No, you fool! The princess is being held to the right! Always the right! Press on, fatso!? That I could buy. But walking into an invisible wall? That?s weird. Here?s a theory ? you never actually reach the right side of the screen, because the game scrolls when you walk in that direction. So maybe the wall you hit on the left side is actually the side of your TV screen and it?s a meta-commentary on the limitations that the medium of television impose on the infinite canvas of Miyamato?s mind. Or maybe not.

1) There Are Only Turtles and Mushrooms

As far as I can tell, the Mushroom Kingdom had two major distinct evolutionary lines. There are the Mushroom people (who come in both good and bad varieties, although the bad Mushroom people can only walk in straight lines and don?t have hands, and the good Mushroom people can speak English and wear vests), and there are the Turtle people, who are all bad. Some of them appear to have evolved into big dragon type things, or have gained the ability to fly or throw hammers, but you can imagine them all coming from the same evolutionary stock. (One presumes that if Bowser ever took over he?d rename it the Turtle Kingdom. There do seem to be more of them after all.) So where the hell does Princess Toadstool fit in on that evolutionary tree? How does this world produce a billion mushrooms, a billion turtles and one seven-foot cute blonde? Is she a highly evolved mushroom like Bowser is a highly evolved turtle? Because that?s fucking gross.