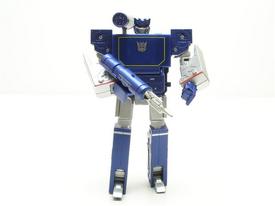 I know this toy’s been out for a while, but since I had to see it on virtually every table in the Dealer’s Room at Botcon, it’s kind of been on my mind. This is a fully transformable Soundwave toy?he looks enough like the original ’80s toy for me (although I’m sure my fellow Botcon attendees could tell me differently), both in his robot mode and his cassette player mode. But instead of playing cassettes, this Soundwave plays MP3s…as long as you have an SD memory card. Given that most of the Soundwave re-issues?whether it be the Japanese one or the U.S. Toys “R” Us” [THAT I COULD NEVER FUCKING FIND GODDAMMIT] from a couple of years ago will usually run you $80-$200, an MP3-playing Soundwave is a pretty good deal. Buy it here, but watch out as there’s a pretty neat black version and a terrible white version in addition to the regular blue.