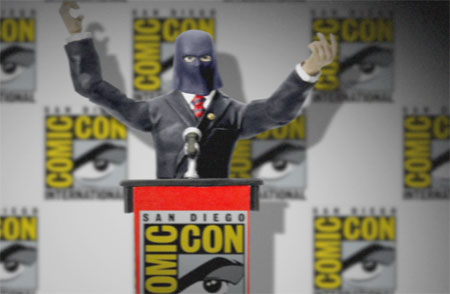 Usually, dressing for the San Diego Comic con means finding your nerdiest T-shirt, pit stains be damned. But Cobra Commander is a man of class, a man with style. He’s getting dolled up in his finest three-piece suit to be Hasbro’s G.I. Joe exclusive for the con, as per issue #38 of Marvel’s old Joe comic. The figure will come with a podium and microphone (it’ll be a Cobra podium, despite the pic above); Hasbro’s even made a goofy little video for the figure here.