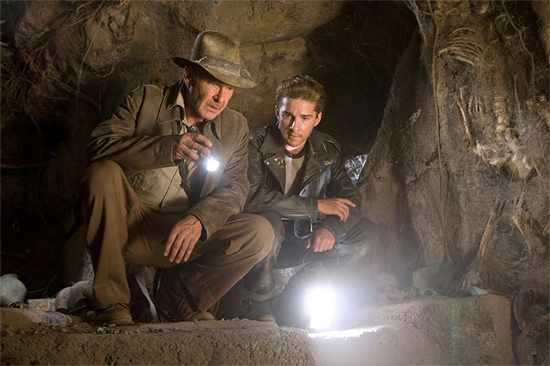 I know I’m supposed to be on vacation, but I watched Indiana Jones and the Kingdom of the Crystal Skull, and I felt I need to tell you guys about it. The short, spoiler free-version is that the first 3/4s are not bad with brief moments of extreme badness, and the last 1/4 is…well, it’s very much not good. If you want details, swing past the jump.

Okay. I was never one of those guys who was upset about the aliens. For me, the aliens were just as goofy as face-melting ghost minions of God hidden inside an ark or a knight living in a trap-filled cave for 500 years. So I’ve go no problem with Crystal Skull‘s central premise. And as I said before, the first 3/4s are pretty good; sure, Harrison Ford is definitely showing his age?the stunts are pretty good, but he’s clearly a bit creaky and is a little sluggish about them?and Shia the Beef and his greaser-schtick isn’t bad at all.

But throughout those first 3/4s, there are moments of such profound stupidness on a regular schedule; it’s like Lucas and Spielberg want to make sure you’re not enjoying things too much by periodically punching you in the junk. Examples:

1) Indy gets in a lead-lined refrigerator to survive an atomic bomb test. The fridge is blown into the air at several hundred miles per hour, smashes into the ground, rolls several dozen times, crashing hard each time. When it stops, the door should open and nothing but a thick red paste and a fedora should pour out. The is no fucking way anyone could have survived that. Instead, Indy pops out and looks bemusedly at the mushroom cloud.

2) As you might have heard elsewhere, Shia the Beef does indeed swing from vine to vine, Tarzan-style, and becomes king of the monkeys, who follow Shia and attack the Communists. It’s pretty goddamn stupid. Worse, the scene where Shia is first on the vine and sees a monkey, I’m pretty positive the monkey is supposed to have the same hairstyle as Shia the greaser, and thus that’s why the monkeys follow him. But I can’t tell for sure. If I was sure that’s what Spielberg intended, I would drive to Hollywood tonight to slap him.

3) There’s a scene where the communists tie Indy down to look in the eyes of the Crystal Skull, an act which drove his mentor Oxley (played by John Hurt, who I hope was paid well for his thankless role) mad. Looking into the eyes of the skull makes Indy twitch and squirm and freak out, and it’s absolutely the stupidest thing that has ever been in an Indiana Jones movie. Worse, it nonsensically does not drive Indy mad and doesn’t really give him any information, since he and everyone else has to follow Oxley’s babbling clues for the rest of the movie, meaning the scene was totally unnecessary.

There’s more, but overall, they don’t break the goodwill of having Harrison Ford back as Indy, or the action scenes, or whatever. Which makes the end even worse, because the movie has never been so bad you hated it, and the ending, which is bad beyond comprehension, is able to hurt you so much worse because you thought it was going to be okay.

There is absolutely nothing in the ending that makes any damn sense at all. Basically, having captured Indy and crew for approximately the one zillionth time, the communists return the crystal skull to the room with all the alien skeletons, and thus are supposed to get the mystical power. And here the wretchedness starts:

1) So when the crystal skull is returned, the 13 alien skeletons unite and turn into a living alien (sure, whatever), and basically, their big round saucer spaceship?hidden under the ancient city?takes off, destroying everything in about a 1/2 mile diameter. Clearly the aliens were waiting for their buddies’ skull to come back before they left, right? Well, as the movie reveals three or four times, the aliens had all been hanging out there together since 3000 B.C. or so, and it was only in 1500 A.D. that a Spanish explorer took the skull. Why the fuck didn’t the aliens leave sooner? They had 4500 fucking years with all their fucking skulls intact! Or conversely, why the fuck did they have to leave within two minutes of getting the skull back? What was the rush?

2) Just before they get to the alien skull room, Indy and crew find a treasure room with tons of ancient Earth artifacts from all over the world. The aliens are archaeologists! Quelle coincidence! But the aliens are also jackasses, because they kept all these priceless artifacts right next to their spaceship, which again destroys the entire city, including everything they had saved. Maybe they’re just shitty archaeologists, I don’t know.

3) Ray Winstone’s character Mac is pretty irritating all the way through, but nothing is worse when Ray scrambles away from the alien room to the treasure room, and starts grabbing whatever gold her can. I posit that these are the actions of a man who interested in getting rich, and thus also interested in living. But when the treasure starts breaking apart, and Mac is holding onto Indy’s whip, laying on the ground, to avoid getting sucked into the interdimensional portal, Mac gives up and lets himself get sucked in?even, as Indy himself points out, he only has to use his fucking legs and push himself forward to survive. It should also be noted Mac’s legs are perfectly fine. But no! He chooses the strange dimension over exerting himself slightly, and walking away with a mess of gold. Grr.

4) When Cate Blanchett as Irina returns the skull, the aliens tell her they want to give her a gift. Irina asks to know everything, with would seem mutually exclusive to her previous stated plans of using the alien power to control the minds of capitalist pigs. However, it’s a moot point, since the aliens?who are clearly also shitty gift-givers?give her so much knowledge her eyes catch on fire. Then she blows up. This is, one could safely say, an extremely shitty gift for someone who returned your goddamn friend’s skull. Also, the alien’s interdimensional spaceship takes off immediately, sucking all her Russian cohorts into the same portal that took Mac because they didn’t instantly run like Indy and crew, meaning the aliens had always intended on screwing over their benefactors (depending on their speed level).

So…yeah. When I left the movie, I was surprised, hurt and confused, like my favorite uncle had suddenly sexually abused me. And that’s Indiana Jones and the Crystal Skull. Happy movie-going!