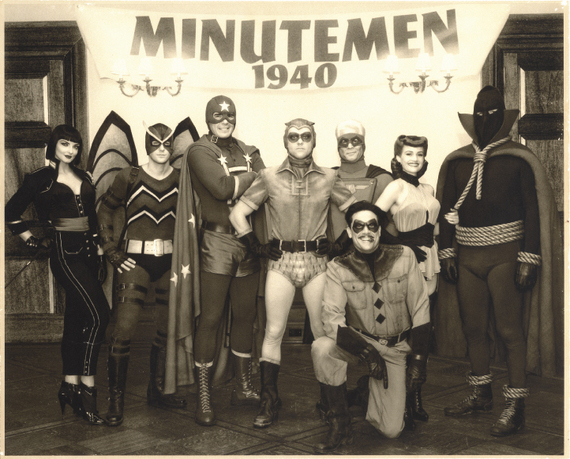 ? AICN got the 1940 class photo of the Minutemen, the original 1940s superhero team in the universe of Watchmen, including the Comedian, Nite Owl and Silk Spectre. Their simplified outfits and out-of-shape physiques leave me feeling like they’re a bit goofy. Unless director Zack Snyder is consciously trying to emulate the 1940s screen superheroes with their goofy outfits and terrible body shapes, in which case it’s a great idea. He’s probably doing it on purpose. So yeah, never mind.

? Remember the Tales of the Black Freighter anime that was going to be included as an extra on the Watchmen DVD? Now Warner Bros. has decided to release it on DVD by itself a mere five days after the Watchmen movie premiere (it’ll eventually make its way to a Watchmen Special Edition DVD later, they say). The New York Times calls this nothing less than an attempt to salvage the plummeting DVD market, but I’m not so sure?other than the hardcore fans, who’s going to buy a DVD of a cartoon of a 1950s-style pirate tale that only tangentially is related to the main Watchmen story? Not Joe Mass Audience, me thinks.