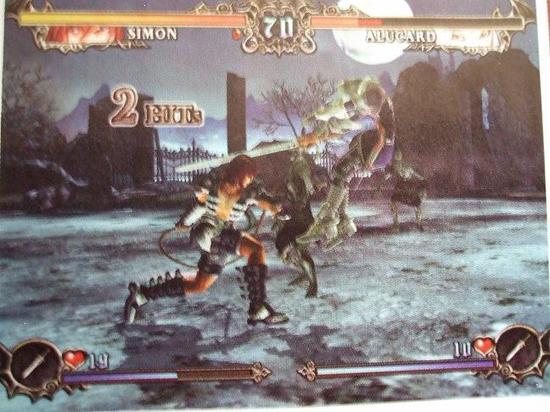 According to the fine folks over at Go Nintendo, the latest issue of Nintendo Power magazine has revealed a new Castlevania game for the Wii…and if you thought for a second it was going to be the 2-D classic-style game that everyone wants, just slap yourself. Go on, I’ll wait.

No, Castlevania: Judgment will be a 3-D fighting game with a cast of 75% Belmonts. As you can see in the screenshot above, that’s the first Castlevania protagonist Simon beating up on Alucard, the pretty boy half-vampire star of Symphony of the Night. This game doesn’t sound like a total loss?you can use the the classic subweapons like holy water and boomerangs, the playing areas are full of traps, and monsters attack both contestants during the fights?but yeah, it’s still not what we’ve been asking for for the last decade or so.