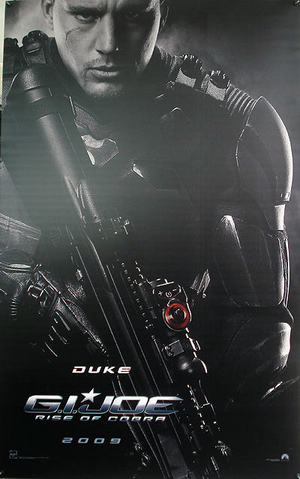 Hey, it’s the official live-action G.I. Joe movie poster! It’s a big picture of Chanum Tatum in his black body armor as Duke! And look, it’s the full title: Rise of Cobra! Say, let’s play a game! Let’s pretend we don’t see the logo on the bottom, and count all of the things that make this poster just scream “G.I. Joe!”

There’s nothing?nothing?that is G.I. Joe in this picture. Since Tatum is neither blond nor 30-something, he looks zero percent like the Duke character from the toys and cartoon. Perhaps making him younger would be fine, but in that totally generic black body armor, he’s also dressed nothing like his original character. And maybe even that would be fine if there were AN AMERICAN FLAG OR SOMETHING THAT EVEN VAGUELY SUGGESTED THIS ASSHOLE IS A REAL AMERICAN HERO SOMEWHERE. If you take away the logo, there is absolutely nothing that would indicate this is a G.I. Joe flick?it’s just some generic action movie. And that, my friends, is what we’re going to get.