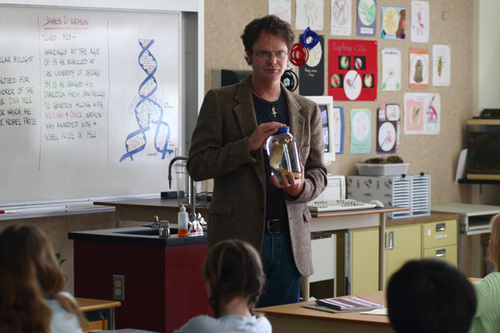 This just in! Rainn Wilson will star as Shia the Beef’s astronomy teacher in Transformers 2, who’s named?and I’m not making this up?Professor Colon. Isn’t that funny? Isn’t that fucking hilarious?! Because colons are used to poop, and no one likes nerdy science teachers! Ha! Ha ha! Oh Michael Bay, no wonder people regard you as a competent filmmaker! Why, who could even think of such a magnificent joke, other than possibly a misbehaving kindergartner? There’s more of a spoiler bout the classroom scene over at The Movie Blog, but I’m too busy clutching my sides in hysterical laughter to go check it out! If my laughter sounds a lot like sobbing, pay it no mind!