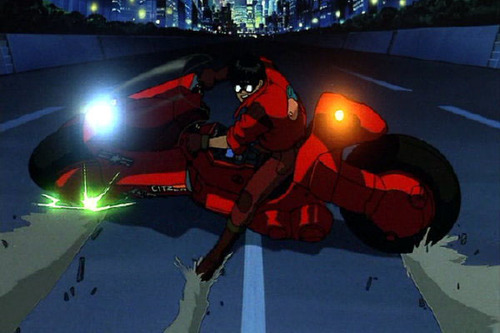 The script for the Leonardo DiCaprio-produced Akira adaptation has hit the early-script-receiving madmen of Latino Review, and…well…they like it. I’m obviously letting my terrible nerd side get the better of me, but I’m having a hard time getting past the fact that Tetsuo has been renamed “Travis.” I’d like to think it’s not because of the name change, but specifically because of the name Travis (apologies to all Travises out there.) Here’s the rundown.

? When the US economy tanks, Japan buys Manhattan?Latino Review calls it New Manhattan (what, no “New New York?”) at first, then New Tokyo later. I hope to god it’s New Tokyo, although I don’t know why they don’t use Neo Tokyo?it sounds significantly cooler.
? At any rate, this explains a new plethora of Japanese people in the city, including Kaneda.
? Travis is American, gets picked up by the shadowy government people, experimented on, and starts breaking shit with his new psychic powers.

Other than that name change and a few characters being switched from Japanese to American, the plot is pretty much an amalgamation of the anime movie and the manga?and it’s actually planned for two movies, which is good because you can’t add anything from the manga and have a movie less than 3 hours.

I really don’t mind the setting change; I knew it would have to happen on way or another, and this seems a great compromise. I don’t mind the partial Americanization of the cast?I had assumed it would be 100%. The fact that the producers care enough to add things from Katsuhiro Otomo’s original manga means they care, because virtually any other studio would have just dumbed down the movie. But still…”Travis”? Sigh. (Via Japanator)