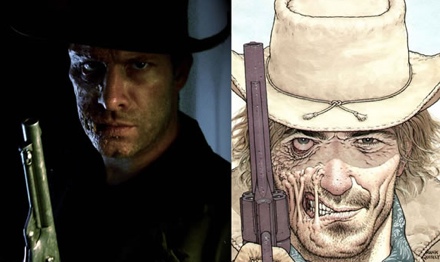 Why, it’s Tom Jane, dressed as Jonah Hex, DC’s favorite disfigured cowboy badass! Why, you ask? Well, despite having not been announced as part of the Jonah Hex movie in any fashion, it seems the producers have taken the above concept pic to see what Jane would look like as Hex, then “leaked” the pic to the Tubernet, and are almost certainly gauging fanboy reaction. All I can think of is that he looks a surprising amount like what we’ve seen of The Dark Knight‘s Two-Face, on the opposite side of the face. (Via /Film)