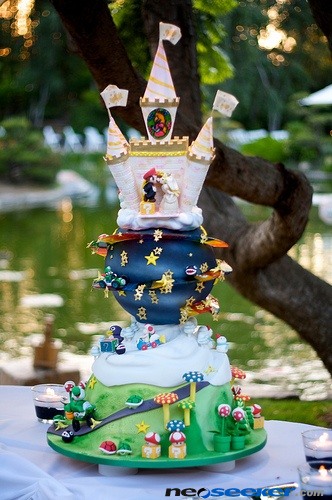 I’d like to offer my congratulations to 4 Color Rebellion forum member Fa1kor, who either got married to a nerd or an incredibly understanding girl (maybe both). Their wedding was nerdery of the highest proportions, including the amazing Mario Kart wedding cake you see above, as well as (according to Neo Seeker):

? Disney songs played during cocktail hour
? Bridesmaids theme was from My Neighbor Totoro
? Groomsmen had the Zelda theme
? The ‘course clear’ song from Super Mario Bros. was played after the couple was announced
? Paul Pape, a ‘food designer’ custom made Miis for the centerpiece, (4cr reports they’ll be featured in an issue of Brides Magazine)

You should definitely check out some more pics here, and offer the happy couple congrats.