Menu
Home
>
Cartoons
>
Well, Smurf Me in the Smurf 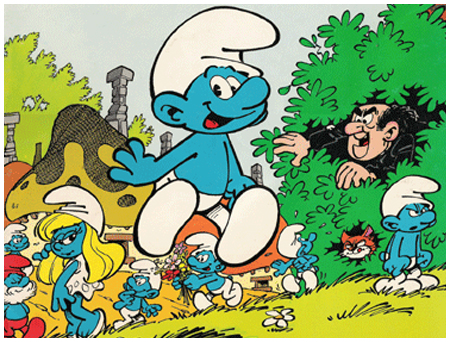 Two sentences I had hoped never to hear or read, from this Variety article announcing a new Smurfs movie:

We’re very excited to introduce a new generation to Papa Smurf, Smurfette and the other smurftastic Smurfs in all of their ‘three-apple-tall’ glory,” [said]Columbia co-president Doug Belgrad.

If you didn’t throw up in your mouth at that sentence, congratulations, you’re a robot. But here’s the worse news:

“Smurfs” marks SPA’s first hybrid film — a subgenre that proved popular given the success of 20th Century Fox’s “Alvin and the Chipmunks.”

Yes, the Alvin and the Chipmunks movie has spawned, and thus has wrought more terrible, further reaching consequences than anyone ever dreamed of. If you need me, I’ll be finding out how much I need to drink to have the courage to commit suicide.