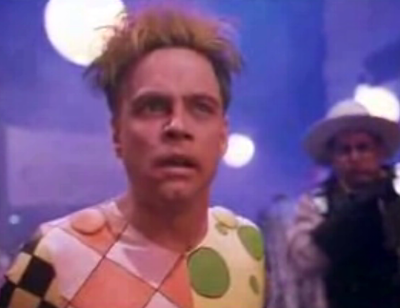 We?ve all heard of Mark Hamill?s unique struggle to escape the shadow of Luke Skywalker, and you might think that he?s had a stagnant career since Return of the Jedi. Well, you?d be wrong. Hamill?s been busy in all sorts of films and TV series: some good, some hilariously terrible.

So we dug through Hamill?s history, setting aside his acclaimed Broadway turns and any parts he had in between the Star Wars movies. We were after his ten most memorable performances since then, and, surprisingly, not all of them turned out to be voice-overs. Oh, and his bit on Stripperella isn?t here, so don?t look for it. 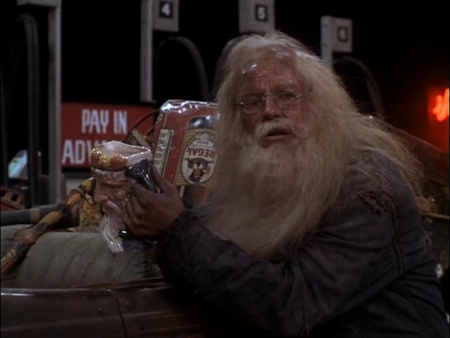 Here?s a gyp: fellow Star Wars lead Harrison Ford became the focus of Steven Spielberg?s Indiana Jones films, while Hamill got only a starring role in an Amazing Stories episode called ?Gather Ye Acorns.? As a young man, Hamill?s character encounters a hairy, capering troll who advises him to buy himself a car and hoard all of his beloved childhood possessions. Hamill takes this advice to the extreme, running away from his disappointed parents with a new car and a heap of toys, comics, and other juvenile things. Decades later, he?s a friendless hermit in the desert, feeling just a bit bitter that he?s wasted his life collecting junk. A few more decades pass, and he?s now a lonely, suicidal old man trying to trade a jar of pennies for one last tank of gas, but a chance meeting with an antique dealer reveals that all of his accumulated kitsch is, in fact, priceless collectibles. The last scene finds Hamill at an auction where his treasures are bringing him wealth and significantly younger girlfriends. Yes, the troll was right all along. He was just a dick about it.

In some ways, ?Gather Ye Acorns? was prescient advice to the Star Wars fans out there: buy all the toys, preserve them, and they?ll be worth a couple thousand in about 20 years. Unfortunately, some fans missed the more cogent point of the piece: you can collect crap without becoming a bearded old shut-in.

9) The Trickster in The Flash

Several superheroes got terrible live-action films in the late ?80s and early ?90s, but the cruelest hand was dealt to the Flash, who had a CBS TV show parading its shame each week. The low-aiming scripts and costumes were awful, but the Flash was a gimmicky second-string DC hero in the first place, and the series struggled to find worthy villains. Hamill?s turn as the Trickster was the best part of the show, even if the character?s look shows us how the Joker would?ve turned out in Joel Schumacher?s Batman movies.

Hamill?s Trickster would survive the mercifully canceled Flash TV series, as he reprised the role for an episode of the Justice League Unlimited cartoon. It was only one episode, of course, because no one really likes The Trickster. 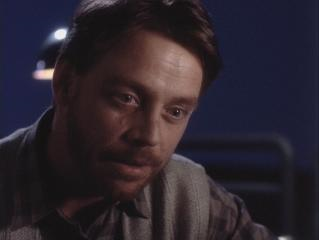 For SeaQuest DSV, Hamill?s character was a walking example of just how desperate the show became during its second and third seasons. In a series that initially explored the undiscovered depths of a semi-realistic ocean, Hamill played a brilliant professor who?d been blinded by a comet as a child and, in the process, merged with an alien from the warlike planet of Hyperion. He aided the Seaquest?s crew in fighting off an alien invasion and later plunged them into a war on Hyperion itself, but the Tobias helping the Seaquest turned out to be a clone and so they had to rescue the real alien-human professor and?oh, the hell with it.

Despite all of that, Hamill put in a solid performance, proving that a role seemingly pulled from a rejected Far Out Space Nuts script is only as terrible as the actor playing it.

7) Muska in Castle in the Sky

When Disney began bringing over Studio Ghibli films in the ?90s, they insisted on recruiting well-known actors for the English version, hoping to avoid the mediocre returns that often came with dubs during that decade. For the most part, it paid off, though Castle in the Sky is perhaps the roughest. Someone apparently decided that James Van Der Beek?s turns in Dawson?s Creek and Varsity Blues made him ideal for voicing a 10-year-old boy.

For the most part, though, Castle in the Sky dub is quality stuff, with Cloris Leachman as the motherly harridan leader of a sky-pirate gang and Hamill as Muska, the scheming, balding villain of the picture. Whether he?s yanking the heroine?s braids or dumping an entire platoon of soldiers to their deaths, Muska sounds even more villainous than his original Japanese actor, Minori Terada, and Hamill even gets to hurl a few crazy screams toward the end. 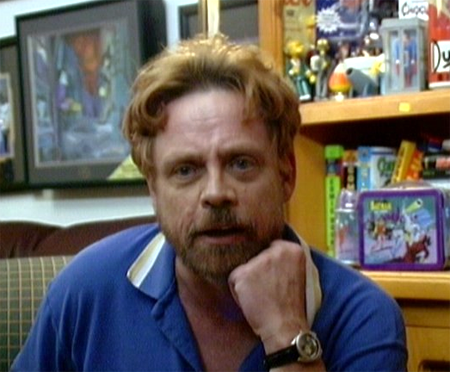 Hamill has never made a secret of his fondness for comics, and there?s no more open example of this than his 2004 ?mockumentary? (the quotes are there because I hate the word) called Comic Book: The Movie. Hamill plays Donald Swan, a comic geek making a documentary about his favorite superheroes, Commander Courage and Liberty Lad, to coincide with a big-budget movie adaptation that transforms his beloved characters into examples of everything wrong with modern entertainment. Amid appearances from Kevin Smith, Stan Lee, Bruce Campbell, and voice actor Billy West, Hamill plays an old-school fan striving to preserve his manchild roots, with his haircut and beard evoking that world-weary William H. Macy look.

The point-and-click graphic adventure game wasn?t invented at LucasArts, but it was arguably perfected there, through a steady evolution that started with Labyrinth in the 1980s and peaked with Grim Fandango in 1998. Full Throttle is the second-best step in that chain, with its rough-edged biker tale of murder, revenge, and the American motorcycle industry. That murder?s committed by the madly ambitious Adrian Ripburger, who provided Hamill with another opportunity to voice a sneering villain. Part amoral corporate lickspittle and part Dick Jones from Robocop, Ripburger hobbles around, but later proves a surprisingly imposing villain, particularly when he?s hounding the game?s heroes with a heavily armed construction vehicle. True to LucasArts? tone, he?s defeated by a minor, indirect slip-up.

4) Max Reed in The Guyver

Long before Dragonball fans were crying over Hollywood mutating their beloved cartoon, a little violence-fest called The Guyver went from anime and manga to a film full of real-life rubbery creatures pounding each other. It was also the source of a thoroughly misleading ad campaign, which suggested that Mark Hamill was playing the hero and, we hoped, getting inside the big, gooey, plastic superhero armor.

Sadly, he didn?t. Hamill plays an undercover cop named Max Reed and spends much of the movie investigating the Guyver armor and its connection to a sinister corporation. Reed?s a fifth wheel in battle, as he watches from the sidelines during the Power Rangers rehearsals that compose the movie?s action scenes. You can see him for a split-second during this little cheese serving.

Calling Avatar an anime rip-off might be fair if the show didn?t shame an awful lot of the actual superhero-ish anime aimed at kids. Its multifaceted characters are an interesting bunch, even in the case of little-seen villains like Hamill?s Fire Lord Ozai, who?s less a cackling Star Wars emperor and more the fire-throwing equivalent of that asshole dad who lets his two-year-old burn his hand on a hot stove so it?ll ?build character.? Ozai?s responsible for just about everything wrong in the world of Avatar, from the militant aggression of the nation he rules to his son?s half-justified tantrums.

In fact, the show?s villains are generally more compelling than the heroes. Perhaps it?s Hamill?s voice that gives Ozai that likeable edge. Or perhaps it?s because the opposition consists of annoying, goody-goody whiners like Prince Zuko there.

The buzzword ?full motion video? should strike terror into the soul of anyone who liked video games around 1990, as the phrase spawned a cottage industry of terrible, grainy movie clips strung together in stumbling mockery of a real game. Some series had the right idea, though, and used such videos to enhance a conventional game. Wing Commander III: Heart of the Tiger was one of them. Granted, the scenes of human actors in hostile negotiations with haughty, spastic cat-puppet-things resemble some community-theater Babylon 5, but Origin Systems had the good grace to use some accomplished actors, including Hamill, Malcolm McDowell, and, just before the hit Fox sci-fi series Sliders made him a household name, John Rhys-Davies.

Hamilll played Christopher Blair, the retroactively named hero of the earlier two Wing Commanders, and does a fairly good job, considering that he?s acting in front of a green-screen most of the time. Could be worse; he could?ve been doing it for The Phantom Menace. Yes, we can still make fun of that. Shut up.

1) The Joker in Batman: The Animated Series

As the story goes, Hamill was originally denied the part of the Joker in the groundbreaking Batman: The Animated Series. The role had already gone to Tim Curry, who, by that point, had a resume of cartoon villain voice work stretching from TaleSpin to Fox?s Peter Pan and the Pirates. Hamill was instead cast as the one-off villain in the Mr. Freeze showcase episode, ?Heart of Ice,? but his performance so impressed the producers that he bumped Curry out of the prized role. And he?s been the voice of the Joker ever since, even to the point where the short-lived crapfest Birds of Prey had him overdub another actor during the Joker?s cameo. How well did Hamill do as the Joker? So well that someone edited together a video dedicated solely to his laugh.