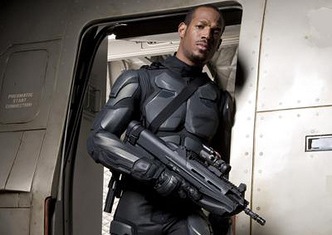 ToyNewsI just did a live-blog of Hasbro’s G.I. Joe panel, where the upcoming comic (by Larry Hama), the upcoming Resolute cartoon (by Warren Ellis) and the upcoming live-action movie (by Satan, Prince of Darkness) were all discussed. You should go read it here, because I’m only going to recap what was said about the movie, and only the bad news from that. Thankfully, there’s plenty of bad news?but be warned, it’s all spoiler-iffic, so hit the jump to discover how bad it’s going to get.

? Duke and Ripcord are not in G.I. Joe when the movie begins.

If you had any doubt that the character of Duke had been changed from “leader of G.I. Joe” to “some random dude,” this should do it. Obviously, they wanted to help introduce G.I. Joe to viewers. And then picked the character least suited to do it.

? Duke and the Baroness were almost married.

Yep. I can’t add anything to this to convey the badness here. This totally unnecessary twist speaks for itself.

I feel it’s worth pointing out that BOTH A FUCKING ’80S CARTOON AND A GODDAMN COMIC BOOK BOTH MADE FOR CHILDREN MANAGED TO CONVEY THAT SAME RELATIONSHIP JUST FINE, YOU JACK-ASSES. Still, Snake Eyes’ loss is a Wayans brother’s gain.

? The Joes have an “accelerator suit” which allows them to run 50 miles per hour, which leads to a car chase.

You know what else goes 50 miles per hour? JEEPS AND MOTORCYCLES AND TANKS AND ALL THE SHIT THAT HAS ALWAYS BEEN FEATURED IN EVERY INCARNATION OF G.I. JOE FOR THE PAST 25 YEARS, YOU FUCKS GAH ARRGH MY HEART