Although you can find plenty of pictures of the new comic figures revealed by Hasbro and Mattel from SDCC, the online toy press does an absolute shit job of actually reporting information. So here it is, as succinct as I can make it. 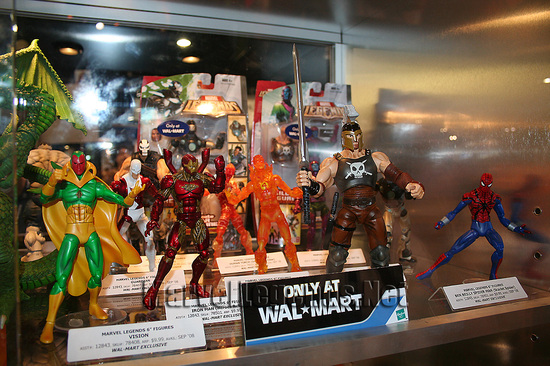 The next wave is another Wal-Mart exclusive wave due in September, and will include:
? Crossbones
? Heroes Reborn Iron Man
? Vision (a new version from the Series 7 one)
? Ben Reilly Spider-Man
? Ultimate War Machine (a repaint of Ultimate Iron Man)
? Human Torch (with variant)
? Kang (looks the same as the impossible to find Fantastic Four series one)
? Guardian (He’s Canadian)
? Ares (the build-a-figure)

But the biggest news is that Hasbro will be making a 3/34-inch Marvel line next spring, meaning it’ll be in-scale with G.I. Joe, Indiana Jones, Star Wars and everything else. I’d tell you the line up, but it’s all the basics, plus a few others, which you can see here. Much thanks to MarvelLegends.net for the breakdown. Hit the Jump for DC.

Now, either Mattel did a shit job of explaining what they’re doing at their panel at SDCC, or no one paid any attention. I had to hit up Justin Aclin, editor of ToyFare, to make sense of it all. Now, Wave 4 should be coming out in a few months, which includes Wonder Woman, Hawkman, Batman Beyond, Captain Atom, Artemis, Ares, Cyborg, and a Despero build-a-figure. Wave 5 is a Wal-Mart exclusive with Atom, Amazo, Black Lightning, Eradicator and the Riddler. That’s not new. Here’s what is:

That’s not all. There will be plenty of two-packs, including a Cyborg Superman/Mongol and a Hal Jordan Green Lantern and Abin Sur in a few months. KB Toys will also have an exclusive Sonic Arm Cyborg and maskless Batman Beyond figure, which is pretty boring. But the coolest one might be an Adam Strange and Starfire two-pack (Starfire’s regular costume being far too revealing for, say Target), on-sale at Mattel’s new collector website MattyCollector.com later on in the fall.

Now, I’d direct you to where pics of all these toys are but, 1) I’ve been working on this post for two hours, 2) ToyFare‘s next issue will have most of the pics in a few weeks, and I totally owe Aclin for helping me out, and 3) virtually none of the toy news sites have them helpfully categorized. So if you must, check out ToyNewsI, Marvelous News, and Action-Figure.