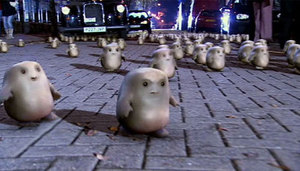 Since making its initial debut in 1963, Doctor Who has become a British cultural institution and part of every geek?s coming of age. While much of its success can be chalked up to good storytelling and consistently good casting of its leading man, what truly makes the show so enduring is a diverse array of bad guys and alien monsters. Such foes as the Daleks and the Cybermen have rightfully earned their place alongside of Klingons and Cylons in the pantheon of great TV sci-fi villains. But not all of the Doctor?s adversaries are so iconic. From the least menacing to the downright stupid, here?s a look at our favorite Timelord?s lamest baddies.

Yetis are a hug from Jesus. It doesn?t matter if they truly exist are only the stuff of legend. They only appeared twice on Doctor Who (in the Patrick Troughton-starring serials The Abominable Snowmen and The Web of Fear), but it was enough to destroy the heart of any Yeti fan. In these installments, the Yeti were constructed of what appeared to be shag carpeting rescued from BBC dumpsters. They had eyeballs that looked like lightbulbs, resulting in a creature that appears to be the illegitimate child of Cookie Puss and Grimace. In a dick move that would later be echoed by the producers of The Six-Million Dollar Man during their Bionic Bigfoot episodes, the Who Yetis were actually just alien robots. That?s bullshit. Everyone knows that Yetis are ferociously proud creatures who could easily thwart the plans of a time-and-space-traveling Gallifreyan if they wanted to. To imply that they are helpless without the aid of extraterrestrials is ignorant and just plain wrong.

Not to be confused with the Nestea Plunge, the Nestene Conciousness is an energy force that can give life to anything made of plastic. While this notion may please fans of the Charmed action figure line, it actually causes quite a bit of havoc. The big bad N.C. uses this ability to make mannequins come alive, and not in a cute Andrew McCarthy loves Kim Cattrall way either. The resulting foes, known as Autons generally wreak terror upon English shoppers before the Doctor swoops in at the last minute to save the day. The Autons (seen in Rose, the first episode of Russell T. Davies? revived Doctor Who series) are creepy and menacing, it?s a shame the same can?t be said of their masters. The Nestene Conciousness is little more than a moving blob of CGI that can easily be defeated by a writer?s construct known as anti-plastic. Now, who wants ice tea?

Whereas the original run of Doctor Who was plagued by low production values, the seemingly unlimited budget of the new series ushered in a troubling shift away from rubber suit monsters to CGI creatures. This is most apparent in the 2007 episode The Lazarus Experiment. Essentially a mad scientist tale, the story stars Mark Gatiss (The League of Gentlemen) as an elderly genius who creates a machine that reverses the effects of aging. Quicker than you can say “Brundlefly,” he tests the device out on himself and is transformed into a hideous beast?made from some of the most awful CGI you?re ever likely to see. Now, I?m no anti-CGI Luddite. I understand how wonderful its utilization can be when done properly. But when a major show like Doctor Who uses it to create a monster that looks like a sub-par level boss in a PS2 game, it?s inexcusable. I can appreciate the delicious irony that a cautionary tale about the misuse of technology results in the misuse of technology, but the fact remains that the Lazarus beast is still terrible.

Making his sole appearance in the 1988 Seventh Doctor story The Happiness Patrol, the Kandy Man is an evil robot with the appearance of a gingerbread man who lives on a planet where being miserable is punished by death. Instead of taking sunrises and sprinkling them with dew, this Kandy Man captures rebels and drowns them in a candy confection. Eventually, a group of citizens known as the Pipe People (because they live below pipes?clever!) gang up on Kandy and murder him. Thus ends the reign of terror of one of the dumbest looking villains in the history of sci-fi.

While America tired of The Weakest Link fairly quickly, those wacky Brits still can?t get enough of host Anne Robinson?s acerbic witticisms. Appearing in the 2005 episodes Bad Wolf and The Parting of Ways, the Anne Droid was a robotic representation of Robinson who hosted the game show aboard the floating TV station Satellite Five in the year 200,100. Was her appearance a sly commentary on the popularity of banal mainstream programming or just an opportunity for a shameless celebrity cameo? My money?s on the latter. Laaaaaame.

Nothing to do with the acclaimed HBO series that everyone loves yet no one seems to watch, the Wire is the chief villain in the episode The Idiot?s Lantern. Taking the appearance of a snotty BBC announcer, she begins draining the energy of Londoners in 1953?including taking their faces?while planning on gaining unlimited power by transmitting a signal over the TV airwaves on the day of the coronation of Queen Elizabeth II. After doing a substantial amount of screaming about how strong she will be once her plan is carried out, she is easily defeated by the Doctor and everything returns to the status quo. Also, the face-stealing gag was done better in The Twilight Zone: The Movie.

Featured in the serial The Brain of Morbius, the Morbius Monster is perhaps the silliest foe from the classic era of Doctor Who?and that?s saying a lot. Constructed by a maniacal scientist using the disembodied brain of a renegade Timelord and various alien body parts, this beastie has a fishbowl for a head and a giant crab pincer for an arm and the rest of his body is constructed of cheap-looking foam rubber. Squaring off against the Fourth Doctor (Tom Baker) in a mental challenge, the creature managed to put the good doc in a coma before falling off of a cliff. It’s probably little consolation to the Morbius Monster’s loved ones, but his appearance on this list is based on looks alone. (His episodes really are quite terrific). Who knows, if he didn’t look cheesier than a Velveeta processing plant, the world could be a very different place.

Appearing in the 2007 Christmas episode Voyage of the Damned, Max Capricorn is a genius businessman who once owned an outer space cruiseliner company. After he is kicked out of the corporation, he vows to get revenge and bankrupt the business by crashing the a starship replica of the Titanic into the Earth. As the Doctor meets a variety of annoyingly offbeat tourists aboard the ship and flirts with guest star/doomed companion Kylie Minoqgue (who fortunately never performs “I Can?t Get You Out of My Head”), it?s revealed that Max is a cyborg who was once a human. I guess we?re supposed to feel sympathy towards the character, because there?s a vague subplot about discrimination against cyborgs. It doesn?t really matter though. Max Capricorn?s motivation is muddy, he has a bad John Waters-esque mustache and he?s extremely punchworthy. But the biggest problem with him is that he?s a low-rent Davros clone.

The most infamous aliens created by Russell T. Davies, the Slitheen brought fart jokes to Doctor Who. Fat jokes too. Awesome. Although it may be difficult to glean from this list, I am actually a staunch defender of Davies and have spent many a minute defending some of his creative choices to fellow fans and detractors of the show and his contributions to it. When it comes to the Slitheen though, I shut my mouth. I hate the fact that their planet is named Raxacoricofallapatorius and that is supposed to be funny. Don’t get me wrong, I’m a huge fan of flatulance humor. If the Slitheen were created for a Red Nose Day charity special, a la the brilliant?and fart-joke heavy?Curse of Fatal Death, I’d be way more forgiving. But it seems that a large reason behind the creation of the Slitheen was to give the producers the opportunity to make toot jokes. The pensive Boomtown episode showed us a more serious side of Slitheen life away from the bathroom humor. But by then, the damage was already done.

The Whoniverse equivalent of Ewoks, the Adipose are creatures made out of human body fat that has been transformed into the beings by an intergalactic diet pill. They are cute. They are cuddly .They are hateful. Appearing in the episode Partners in Crime (which also made Catherine Tate?s insufferable Donna Noble character a full-time companion), the little bastards do nothing more than mug for the camera. They pose no real threat and serve no purpose. They exist to show off the dubious wonders of computer-generated imagery. With any luck, they?ll never show up again.