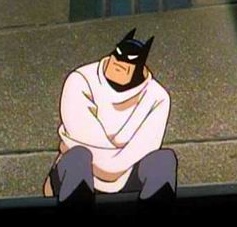 Batman has got to be the favored superhero of the mentally ill. He?s their King, after all?the guy who took his unhealthy obsession to mega-levels, and in doing so, became a legend. (Of course, Batman is also one of the most popular heroes for the American population?what that says about the sanity of the nation at large is an open question.) It makes sense, then, that most of Batman?s villains are a few batarangs short of a full utility belt?try to name one of the Dark Knight?s rogues gallery that?s not cuckoo for cocoa puffs. Batman?s whole shtick is that he?s the madman fighting the madness.

But the thing about Batman is that he?s not limited to just one mental disorder?this guy visited the crazy buffet, filled his plate, and went back for seconds. So here?s a rundown of the 10 biggest mental problems he’s got, all of which prove that Batman is very clearly bat-shit insane.

For a guy who fights the Joker every Tuesday or so, a fear of clowns is a no-brainer. Seriously, Joker not only dresses like a clown himself, but dresses his henchmen as clowns too?big clown thugs with knives and guns and chains. Even victims of Joker gas take on a clown-like appearance. To fight this fear, Batman keeps a giant Joker card bearing a big clowny grin on it right there in the Batcave. But you can be sure that when Batman watched Poltergeist with Alfred and Robin, he makes a point of going to the stately Wayne Manor kitchen for popcorn during the strangling-clown scene. 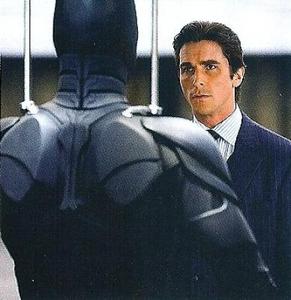 At his core, Batman has always had more in common with Two-Face than Joker, despite what Alan Moore was selling in The Killing Joke. This is something the upcoming Bat-flick will probably deal with a bit, considering the Harvey Dent line “You either die a hero, or live long enough to see yourself become the villain.? This is obviously as much a reference to Batman as it is to the eventual fate of the Gotham D.A. There?s also the idea that Batman is also a master of disguise?hello, Matches Malone!?and you get the idea that Bruce Wayne is a guy who?s not always Bruce Wayne, you know?

This is pretty much indisputable. Sure, Batman doesn?t have some compulsion to vacuum the same spot exactly seven times, or to flip the lights on in a certain pattern whenever he enters the Batcave, but his exercise regimen has to at least border on the obsessive, and anyone who consciously chooses a nightly war on crime over hanging out with Vicky Vale or even Selina Kyle? That?s compulsion, chum.

7) Sublimation of Grief and Bereavement Disorder 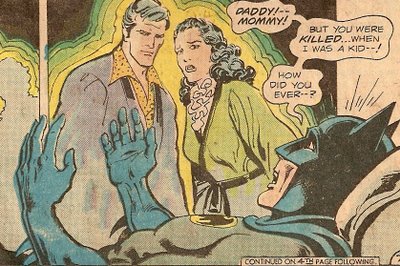 Seeing your mother and father gunned down in the street, after a night on the town that you insisted they take you on (at least in some continuity?welcome to modern comics, where even origin stories are rectonned)? Ouch. But responding to it by saying “I shall become a bat!” because some stupid-ass fruit-bat whose sonar is on the fritz smacks into your window one night is not normal. Most people lose their parents at some point in their lives?some under tragic circumstance. And none of those people choose to deal with it by dressing up as the next nocturnal animal they see. 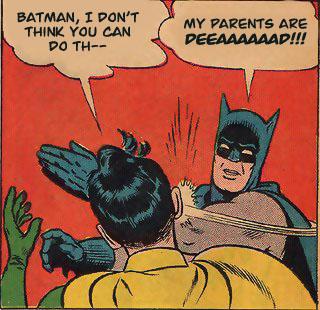 And speaking of seeing your parents murdered before your eyes, it does tend to make you tense and irritable. You might even take it out on someone who doesn’t deserve it. 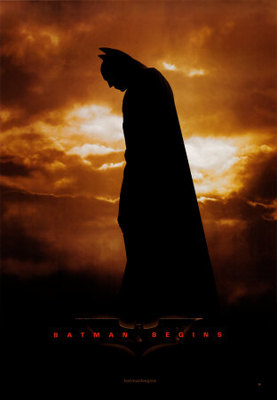 Batman is the ultimate melancholic. How else do you explain this obsession with the color black, the brooding attitude even to his closest friends (golden age Happy-Bat Worlds? Finest stories notwithstanding), the resistance to becoming emotionally close to anyone? (One could make a case for the inclusion of attachment disorder on this list, but that?s not really the case?Batman does get emotionally attached to people; he just chooses to hide and deny it. So get Dr. Leslie Thompkins to prescribe you some Zoloft or something, Bruce. Even Sylvia Plath cracked a smile once in a while, you self-important twit. 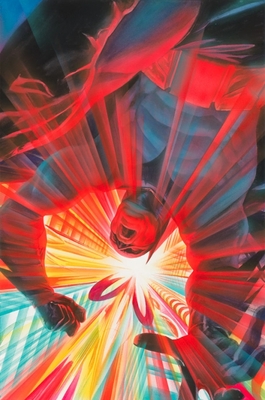 No, really. Batman has taken heroin and meth (Batman #678), and Venom, the crazy-ass serum that made Bane (Legends of the Dark Knight 16-20). Besides, it’s simple logic?there?s no way that Bruce Wayne isn?t addicted to heavy painkillers. Sure, he?s able to separate himself from the physical and reduce or even eliminate the sensation of pain like the most powerful yogis of the mystic arts, yadda yadda yadda. But you have to assume that the guy is also downing Vicodin like they were tic-tacs. And if so, Alfred? You, sir, are an enabler.

Okay, so Batman doesn?t call himself ? the World’s Greatest Detective,” but he?s proven time and again that he believes that he not only can do anything (take out Superman?), but he?s also the only one who can save aforementioned world from other heroes gone rogue?thus, the OMAC protocols, which led directly to Infinite Crisis, and lots of bad stuff that?s still ongoing. And it all started, at least in part, because Batman thought he was the best person to decide what the world needed. Batman, Ozymandias. Ozymandias, Batman. 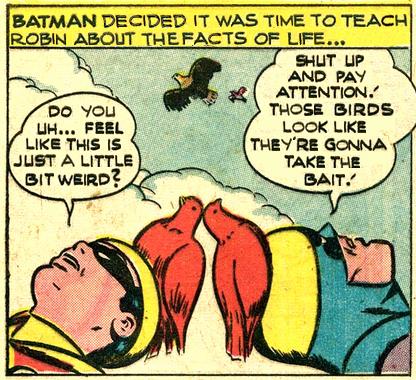 This disorder, which usually exhibits itself in terms of a parent causing the illness of a child in order to garner attention, sympathy, and means of support for themselves, is something close to what Batman does with his many ?wards?. Namely, he puts them in constant danger so that, perhaps, he can save them as his parents failed to save him from the life he’s inherited. Also, so he can stand in front of a glass case displaying the Robin togs they died in, so he can feel bad about himself, renew his will to fight, and get angry all over again (see psychoses #8, 6, 5, and 1).