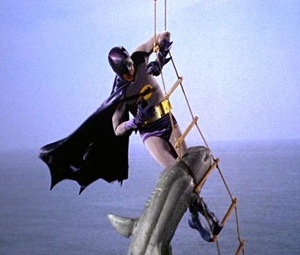 Everyone knows that Batman is all about the “wonderful toys.” Batman can’t fly, he can’t run at the speed of light, he has no magical lasso which makes people tell the truth?all he has is his brains, his brawn, and his gadgets in his fight against crime. His utility belt is his main source of his gear, of course, carrying useful things like Batarangs, for example. But with all those devices that Bruce Wayne has developed and employed in the comics, the movies, the games and the television shows that Batman has starred in, not all the items can be as useful as bat-shaped throwing stars. Here are ten of the most ludicrous things that Batman has thought (somehow) to carry with him and utilize in his eternal war on crime.

10) Bat-Shark Repellent from the ’60 Batman movie

Seriously, any serious student of the Bat had to know this was going to be on the list. And yeah, it?s insanely goofy?as is the thought that Batman always carries shark reppellent in his utility belt, just in case! Of course, it makes a difference that it (and the show) was supposed to be goofy, and purposeful stupidity doesn?t really have the same effect as does unintended stupidity. But still, the Bat-shark Repellent is legendary enough (and dumb enough) to lead off this list. And so long as I?m on stupid things from the Batman TV show? Three words: Cesar Romero?s painted-over mustache.

9) Lockpick from Batman: The Last Arkham

It?s not strange that Batman would have a lockpick, of course?this seems like an obvious thing for the guy to carry. It?s where he carries it that?s just weird?under his tongue. This makes no sense for several reasons; 1) he has a utility belt to carry these sorts of things; 2) it would seem dangerous to have a sharp metal stick in your mouth when you’re planning on fighting thugs and all night; and 3) unless he was trained in the mystic tradition of tongue yoga while doing his years of jiu-jitsu training, there?s no way he could carry a lockpick under his tongue and not have a Bat-speech-impediment. Can you really strike fear into evil hearts with a lisp?

Bat-boots seem like pretty good things to have, but over the years, they?ve seemed more like a Swiss Army Knife version of footwear than anything. From the ice skate boots from Batman & Robin to the rocket boots from Batman Forever to air-inflated raft shoes from Detective Comics #54, Batman has continually tried to make his boots do more than just look snazzy. This culminated in the Batman television series, when they had bulletproof soles on their boots. This caused Robin to make the comment ?Holy Dumbass, Batman, why don?t we just make our suits out of this stuff?? Which, of course, directly led to Batman getting a new, less mouthy Robin.

7) Broth from Batman: The Ultimate Evil

Soup is certainly good food, but when you think of stuff in Batman?s utility belt, you probably don?t think broth. Broth? Broth. (Not even Bat-broth, though I guess that carries unappetizing connotations of some sort of guano-based drink.) Anyway, it?s supposedly a quick energy-boost, which I guess it is, but so?s a Soyjoy, you know? If you?re going to have broth in your belt, you might as well carry talcum powder and old lady perfume, there, Grandma.

Ah, the Batarang?a much maligned but still awesome thing. With all the Green-Arrow-type crap that it?s been transformed into over the years (a police whistle batarang, a seeing-eye batarang, a magnet batarang), it?s surprising that it?s not yet lame. But it came perilously close in Batman Returns, when it was ?programmed? to hit four successive goons in one throw. Come on. First of all, computerized doesn?t mean ?magical,” Second of all, even comic book fans know deus ex machina when we see it. If you?re going to have a batarang hit four guys, just have it hit four guys. Talk to Captain America?he does that shit all the time with his shield.

Another all-too-easy TV invention for Batman to battle his various nemeses, but this one is just ridiculous. Ostensibly designed to combat the Penguin?s knockout-gas-umbrella, the Anti-Penguin Gas Pills sound more like what Penguin?s goons (probably named Gull, Titwillow, and Nuthatch) would take on Beans and Franks night at the hideout.

Slippery goo. That?s great. Batman somehow loses his mystique when he utilizes $1.99 glop that you can buy in the toy aisle at Target.

The Batmobile has a key? This seems short-sighted, even for the wacky 1960s Batman. Did you ever see Batman use his key to open the Batmobile door? To turn the Bat-engine? Fuck Bat-no! And there?s a reason for this, of course, and it?s that even the World?s Greatest Detective loses his freaking keys at least once a week, like the rest of us.

Batman was apparently channeling the spirit of MacGyver in this issue of the comic book, as he unraveled a wool sock, tied the resulting thread to a bent fork, and made a (very) makeshift grappling hook. It was only Batman’s amazing skill that allowed him to use it for climbing, given the tensile strength of sock thread, and the weight capacity of a bent fork; a similar device designed by you or me would only be useful for use by birds or very small kittens, of course. And that must have been one fine-smelling grapple, too, especially after hanging out in his leather boot all day. Come to think of it, you can add ?a fork? to the strange things Batman keeps on his person. Batman comes ready for anything?cake, or even spaghetti! 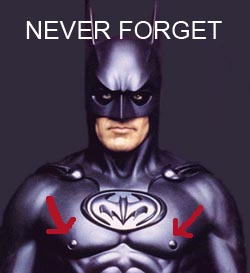