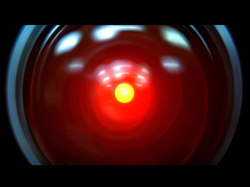 When computers inevitably take over the world, you can bet that sci-fi writers are going to be the first ones slaughtered by their electronic death rays. Throughout the history of science fiction, they have frequently been portrayed as scheming machines that want nothing more than to enslave or destroy humanity. Whether acting as a metaphor for society?s fear of the unknown or reflecting upon concerns about the misuse of technology, computers are the genre?s whipping boy. So it makes sense that they are often troublemaking punks out to spoil our fun in sci-fi films and TV shows. Here?s a look at the worst offenders.

During the first season of Buck Rogers in the 25th Century, Dr. Theopolis?Theo if you will?was Twiki?s computerized buddy. Although he was considered one of the world?s greatest minds and held an esteemed position on the Earth?s Computer Council, he was mainly a big time know-it-all who constantly felt the need to express his disdain over his cock-headed robot pal?s wisecracks. Twiki had enough problems, what with sounding like Mel Blanc then suddenly not and all. The last thing he needed was to get chastised by some sexually ambivalent computer that looked like an electric meter.

Note to space truckers of the future: don?t take a job from the Weyland-Yutani Corporation. The evil computer of Alien, MU-TH-R 182 (a.k.a. Mother) secretly took the crew of the Nostromo on a mission to check out an extraterrestrial signal and bring back one of the acid-dripping beasties for the Company to research if it could be implemented as a weapon. No one aboard except for the android Ash (coming soon to the 7 Biggest Asshole Robots in Sci-Fi Daily List) knew of Mother?s plan. The computer was perfectly fine with its entire crew being wiped out by the vicious xenomorph, proving once and for all that Mother was a fucker.

From Marvin the Paranoid Android to Eddie, the ever-upbeat computer aboard the starship Heart of Gold, The Hitchhiker?s Guide to the Galaxy features a non-stop array of assholish robots and computers. None are worse than Deep Thought. Created to figure out ?Life, the Universe and Everything,? the pompous machine wasted seven and a half million years of everyone?s time before announcing that the answer to all of existence was 42. The problem was that no one knew exactly what the question was, so the answer made no sense. Declaring that he didn?t have a clue either, Deep Thought had to build a supercomputer called the Earth to sort out exactly what the Ultinate Question was. It?s bad enough that he couldn?t do the job, but he had to pass the buck as well. He?s like your office manager who thinks up new team-building initiatives on a Friday afternoon and assigns you to figure out how to implement them by Monday morning. It was never mentioned in the books, but I bet Deep Thought would bend people?s ears about his killer golf swing too.

In WarGames, Matthew Broderick portrays a teenage computer hacker who accesses what he believes to be a videogame company?s mainframe. Turns out, Bueller got it wrong and he actually hacked into the government?s War Operation Plan Response computer. Deciding to play the machine?s Globalthermo Nuclear War simulation, he inadvertently kickstarts World War III when NORAD misinterprets the scenario as a full-on attack by the Russkies against the U.S. of A. With the help of Ally Sheedy and the computer?s creator, he manages to stop the now-sentient WOPR from destroying the human race through a nicely metaphoric game of Tic Tac Toe. Released 25 years ago, WarGames came out in an era besieged by nuclear fears and fascinated by the strange?and potentially dangerous?potentials of the computer age. WOPR wasn?t the first a-hole computer in sci-fi, but it was the one that most accurately reflected the very real concerns of its time.

Encom?s Master Control Program was a gigantic assclown. Not pleased with merely enslaving the programs that lived inside its mainframe, the MCP sought nothing less than global domination. Fortunately for us all, it learned a lesson in hubris when it was brought down by an electronic Frisbee. Subsequently, Flynn regained ownership of his Space Paranoids game and Tron and Yuri got to enjoy their new lives in the computer world?doubtlessly resulting in lots of kinky electrosex. End of line.

Illustrating in horrific detail what WarGames merely hinted at, the Skynet military defense system of the Terminator films showcased the repercussions that self-aware computers could have upon the world. Taking control of Earth?s Global Digital Defense Network of military hardware and computers, Skynet used our own weapons against us to create a future dominated by amazingly cool Stan Winston-created robots. Given the success of Terminator: The Sarah Connor Chronicles and the anticipation for next summer?s Terminator: Salvation, it?s a given that Skynet will be causing problems for years to come: both for those in John Connor?s life and sci-fi fans who?ve had it with this whole franchise already.

?The 9000 series is the most reliable computer ever made. No 9000 computer has ever made a mistake or distorted information. We are all, by any practical definition of the words, foolproof and incapable of error.? ? Hal 9000

I?d probably be lynched by Topless Robot readers if Hal 9000 didn?t take the top spot on this list, and rightfully so. Stanley Kubrick?s 2001: A Space Odyssey is a pop culture rarity akin to The Beatles? success?it?s impact can never truly be measured and it will continue to inspire forever. As Outkast asked: what?s cooler than cool? Ice cold. And that?s just what Hal is. An electronic terror with a peaceful voice and a sinister red eye, he is the personification of man?s fears of technology run amuck. Smug and plotting, he turns against the astronauts aboard the Discovery One with murderous results. Hal deserves your praise and your scorn. He?s no ordinary asshole computer, he?s the asshole computer. He set the bar for technodickery, and so far, none have come close.