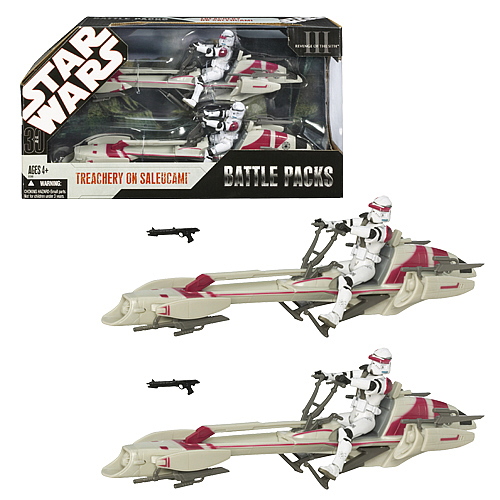 Those stupid Jedi! If they can’t be bothered to read the instruction book that came with their magically appearing Clone Army, then they deserve to all be shot in the back during Order 66. This former retailer exclusive celebrates the Jedi’s ignominious slaughter with two Clonetroopers on speederbikes, which were seen in Sith on the planet of Saleucami. Now, I’m a pretty big nerd, but even I had to look that one up?it’s the planet where Jedi mistress Stass Allie is shot (which I also had to look up; she’s the female Jedi with what is either a silly hat or several tiny head tentacles). At any rate, ‘trooper on speederbikes have been awesome since 1983, so $24 for these two isn’t a bad deal at all. Buy ’em here.