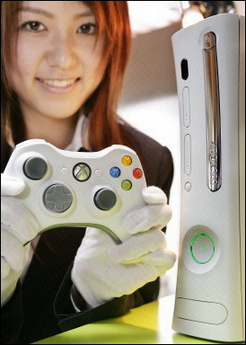 Uh…I hate to break this to you, but you should kiss your loved ones, stop cleaning the house, and take those remaining vacation days, because the world is coming to an end. These are the final times, and we’re all going to die in a rain of fire or plague or frogs or plague-ridden, flaming frogs. See, the Xbox 360 has sold out…in Japan.

Okay, if you aren’t gibbering in terror, I don’t think you understand. Since the 360 was released in 2006, the console has routinely gotten it’s ass kicked in Japan by every single console on the market?the Wii, the PS3, the PS2, the Nintendo DS, the obsolete Game Boy Advance, and sometimes, even the defunct GameCube and the first PlayStation. But since Microsoft finally snagged a Japanese RPG worth something?namely, the newest in the Tales of Vesperia saga?the actual console has sold out over the entire nation. Admittedly, Microsoft probably didn’t have more than a few thousand consoles in Japan, since they usually only sold low-triple-digits (or even double) each week, but still! If you see a cat and dog living together later today, don’t be surprised. (Via Kotaku)