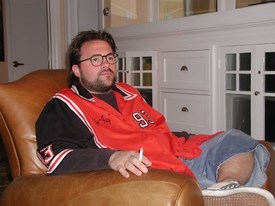 The guys at TrekMovie.com were listening the radio (the hell? Who does that any more?!) when Kevin Smith came on, and talked about the new Trek movie with an absolute failure of subtlety.

Smith: I saw a movie last night that I cannot talk about.

Host: Was it good?

Smith: It was phenomenal.

Host: Any stars, any break out stars, and do they trek?

Smith: The stars absolutely trek in this film. It is fantastic. Anybody who was worried doesn?t need to be worried?about this film I cannot talk about?It was in very capable hands. The director did a phenomenal job?the director and his crew. Top notch cast and the guy that plays the lead is an instant star. That dude is going to be so famous. He is so wonderful. He picked up a role that I would say is pretty challenging for someone to step into the shoes of, because it is a role that has been played before many times by the same guy.

There’s a little bit more, but it doesn’t amount to much. Now, say what you want about Smith’s movies?seriously, I don’t care, I haven’t enjoyed one in the last decade?but he is one hell of a nerd. He should seriously consider just using his connections to preview movies and stuff; it’d be like AICN, but not horrible.

And don’t bitch at Smith for gloating that he got to see the new Star Trek; if you saw it, you’d be on the internet in minutes, and you’d be even more obnoxious about it. Hell, if I saw Trek, I’d post a pic of my pasty, ever-widening ass, and force you guys to send in pictures of you kissing it on your monitors before I told you about the movie. So let’s all count our blessings, shall we?