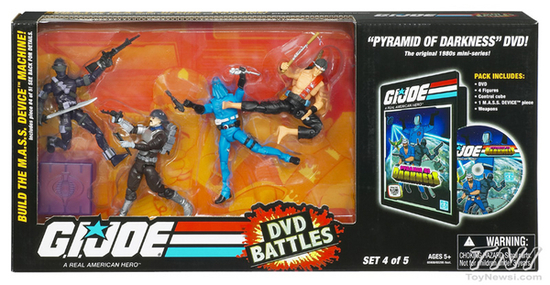 You’re looking at another one of those “DVD Battle” G.I. Joe sets Hasbro is putting out; you know, like the Mass Device one or the Dominator packs?they come with a few figures, a nice accessory, and a DVD of the episodes being referenced in plastic. Now, I have zero memory of the “Pyramid of Darkness” saga, and I doubt Joe fans need yet another Snake Eyes, Major Bludd or hooded Cobra Commander, but I imagine it’ll be hard to resist any toy set whose package so clearly shows Joe martial artist QuickKick kicking the shit out of Cobra Commander. Did this actually happen in the “Pyramid” cartoon episodes? Because it seems like I should remember that. (Via ToyNewsI)