The universe is filled with the unfair and inexplicable; us humans can only stare blankly into space pondering why so much good leaves this mortal coil so quickly. We?re not just talking the Heath Ledgers and James Deans of the world; nerds are preoccupied with even the most banal questions that undermine our existence. Why is there a Madagascar 2 but still no sequel for Akira? Did Clearly Canadian soda really deserve such a short life? How come the Chicken Dinner Bar died, but Smarties continue to thrive?

This last question is especially irksome, for while plebian crap like Dum Dum Suckers and Candy Corn continue to fill up many a sad Trick-or-Treater pumpkin-shaped pail, so many innovative and satisfying candies have died premature deaths, from Abba Zabbas and Fresh Mint Skittles, to hap pappy Uncle Buck. But this isn?t a list celebrating the Candy Man?s greatest comedies (although there damn well should be). Rather, it?s a paean to that last great candy decade, the 80s, decade of so much unhealthy greatness. 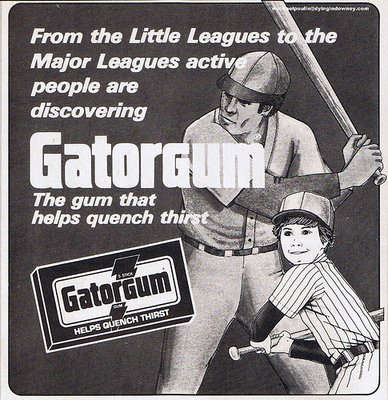 People used to chew a lot of gum. That?s the history of the ’80s?we were all chewing our gum, and then, one day, evil drink corporations decided that they would make gum-versions of every child?s second favorite vice, soda. Pretty soon, store shelves were flooded with Dr Pepper Gum, 7-Up Gum, A&W Root Beer Gum, and, the best of the bunch, Gatorade Gum, which didn?t actually hydrate the chewer, but the package said it contained electrolytes so everyone believed it did anyway. GatorGum started out sour, then got sweet, and then, like all gums, tasted like shit, but its initial stages were so delicious that you just had to swallow a few dozen packs before hauling your gum-filled belly to the hospital for a stomach pump. Supposedly Orbit lemon-lime gum tastes like Gator Gum, but what?s the point if there?re no electrolytes?

Back in the inception of the Google Search Bar, a search for the name ?Candilicious? would have turned up far fewer slutty Facebook and MySpace profiles of 40-year-old cougars, and maybe just a few more pages featuring the marvelous Starburst offspring. Starburst, though a classic, is a little brittle. Candilicious were like Starburst left out in the sun, but without the musty warmth. Fruit and tropical flavors were only half the story, as many a kid bought them expecting the acid-induced hallucinations promised in the commercials: animated lucid dreams full of multi-colored monsters with Cheshire Cat smiles swallowing the candies whole and morphing into the Candilicious logo.

Bonkers were chewy two-tone blocks that came in a complementary pair of flavors ? strawberry and banana, or mango and watermelon. And then there was the chocolate chew, which, surprisingly, wasn?t crap, but was a logic-defying chewy piece of chocolate. The marketers clearly knew how good it was too, since the eaters in their commercials are hysterically laughing with pleasure despite the fact that they?ve had half their bodies horribly crushed by monstrously sized fruit and chocolate.

Okay, a good bubble gum isn?t so much delicious as it is clever, and we?re all for that here. Except for Fortune Gum, which was delicious and clever. It had an orange tang and came with hilarious fortunes which can?t possibly be remembered now. Gold Rush Bubble Gum, on the other hand, wasn?t anything special, but it had the best damn wrapper ever: a little cloth pouch that is absolutely perfect for pretending you?re a mage or wizard. Or a miner, but who ever wants to be a miner. 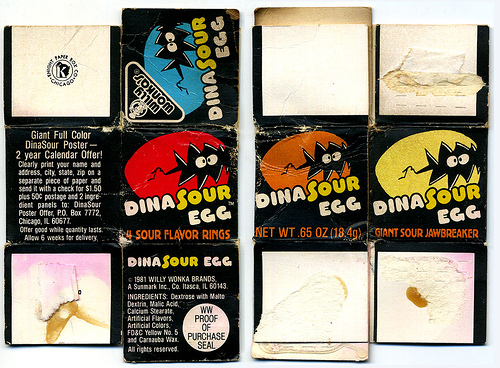 Some of Wonka?s products might have dated, but leave it to the heartless corporation named after the kindly, psychotic philanthropist to make a gobstopper for poor kids that lasts for DAYS. Of course, it sort of sucked to suck on the monotonous Everlasting Gobstopper for days, but the DinaSour Egg had variation ? it would change flavors and colors based on how long you sucked, and in the center was a refreshing burst of sweet, sugary powder. DinaSour Eggs would later evolve into tinier Runts-like eggs that looked more like Dinosaur Dingleberries than actual eggs, but Darwin wasn?t kind on the hard-shell candy. The only dinosaur egg candy found today is in chocolate form with an orange jelly inside, letting kids simulate the feeling of sucking out the yolk of an unborn baby dinosaur.

Like their real-life counterparts, Dweebs, so much better than their more popular, less talented cousins Nerds, never really got a fair crack at life. A squishier Nerd with more leg space and a surprise in the middle, Dweebs were more substantial, less sour, and displayed a greater depth and complexity than Nerds. Sure, they were fatter, but that shouldn?t be a bad thing when it comes to your candy. And sure, their box art had them performing generally infantile things like yo-yoing or rollerblading, but they surely made up for their lack of social skills with not two, but three flavors in the box. Jesus Christ, trying to justify their worth through an analysis of their personalities is not working. Look, they just tasted freaking better.

Nestle?s almond-laden white chocolate bar is gone, and that?s a sad thing, because almonds and white chocolate in a fancy wrapper for the price of a Mr. Goodbar should be a wonderful thing. Instead, Alpine White was put out of commission, leaving its milk and dark chocolate brothers with sole control over the candy turf (that really wasn?t meant to sound as racist as it did). Quite frankly, white chocolate just doesn?t get the respect in this country that it truly deserves. It?s always been associated with effeminate men wearing shawls and middle-aged women who sip chardonnay, and the Alpine White commercials surely didn?t help that elitist image. Elitism only works when your candy bar is the Grey Poupon of all candy bars and monocle-bearing geriatrics start eating it in their limos.

The peanut-butter infused chocolate cookie doesn?t just make Reese?s Peanut Butter Cups look like a PB phony (there was real peanut butter in them cookies!), it also harkened back to a time when southern stereotypes in commercials were a positive attribute that denoted your product was WHOLESOME, and HEARTY, and not at all BIGOTED, or BARBARIC, or any of the dozens of negative stereotypes Hollywood hoists upon the south today. A southern accent signaled, hey, this mass-produced product can?t be that heartless if it?s supported by this sincere, shoeless rube in his straw hat. Oh, and the peanut butter was crunchy, not smooth. Pure PB bliss.

Without photos or sound bites, I run the risk here of being called a liar and cheat, but, to paraphrase one of Seinfeld?s breast implant-suspected girlfriends, not only were Chocolate Fruit- Roll-ups real, they were fantastic. Well, they were kind of filmy, and there were some lousy flavors like butterscotch, but the masses could not be deceived. The Chocolate Fruit Roll-up had no fruit, but was a square, congealed sheet of milk-chocolate, slightly chewy, but rich with milk chocolate flavor. Unfortunately, there was some piss-poor PR hawking these things, and Mrs. Crocker and her marketing thugs distanced themselves from its commercial failure by pretending the Chocolate Fruit Roll-up never existed. And now, only a select few can ever recall them again.

There were two candy bars that, when they were stricken from supermarket shelves, took pieces of every American?s heart with them (metaphorically speaking, of course, because that would be grotesque). One was the Summit Bar, a chocolaty concoction with whole peanuts inside layered on top of two solid wafers. Much better than that lame other pair of bars, Twix, the Summit Bar had a place on this list before rumors surfaced that it has made a comeback through online retailers. That?s great news and leaves us only with that one other milky wafer bar to futilely pine for: Bar None.

Bar None was like what the Six-Dollar Burger was to all other burgers at its conception ? it was a premium chocolate in a budget wrapper, simply outclassing all other similarly-priced chocolates. Fortunately and unfortunately, Bar None didn?t last long enough to see its price skyrocket and its competitors churn out copycat bars. There hasn?t been anything quite like Bar None?s combination of creamy richness, crushed peanuts, and shockingly crispy wafer for its price since (though Tim-Tams and some other boutique chocolate cookies come close in flavor, those products cost upwards of several dollars). Old Man Hershey was impatient with Bar None, toyed around with it by splitting it into two bars, and it was never the same. Supposedly it can be spotted hiding out in Mexico candy shops, injecting ungodly caramel into its veins while telling the other bars that it had so much to live for before life and its cruel arbiters of taste decided to kick its face in.