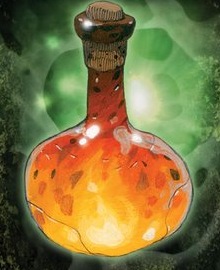 Dungeons & Dragons, as a game, is largely stuff-driven. Since the purpose of the game isn?t so much to win, but rather to survive and thrive, the accumulation of stuff is a big part of the experience. Now add to that the idea that some of that stuff not only makes you more wealthy, but also more powerful, and the idea of ?my stuff? just got a lot more important. There?s a good reason why gamers connect with Gollum from Lord of the Rings. Every character who?s around for a while gets their ?precious,” whether it be a Necklace of Fireballs or a Vorpal Sword +4.

But that?s not to say that every item in D&D is worth coveting. In fact, some things are downright dumb, for one reason or another. So here, a list of the worst ?stuff? that D&D has to offer?everything from the badly thought-through to the sorts of things that no adventurer wants to find in a dragon?s hoard.

Is there a purpose to this item existing, except for a DM to allow its discovery by an adventuring party, see the fighters? eyes light up, hear someone exclaim ?A girdle of giant strength!,? watch the players dice for dibs, and then savor the light of hope dying in the winner?s eyes (and the laughter of everyone else around the table) when they don the girdle and turn (invariably) into a girl? No. And it makes it worse that there?s virtually no logical reason for any character in a fantasy setting to ever spend the time and money to make one of these, outside some very extreme (or kinky) circumstances. It?s nothing but a big fuck-you from DM to player, beginning to gender-bending end.

Admittedly, a bag of holding is on the awesome side of stupid; it?s not the item itself in this case that?s dumb, but rather its unintended effect. It?s supposed to allow the bearer to carry multiples of the weight they?d otherwise be allowed to lug around. Instead, it effectively acts as a reason to ignore the realities of encumbrance altogether. Which most players probably do anyway, because it?s a pain in the ass, but still.

Even artifact-level items can suck, and this one certainly fits the bill. The Apparatus is basically a small, magical submarine, which carries with it the same curse that Aquaman lives with every damn day: that it?s only cool in very few, water-based situations. Oh, the Apparatus tries to make itself worthwhile in other ways, like by imitating (in movement and ability) a giant crab, but still?a giant crab? That was one piss-poor idea, Kwalish, whoever the hell you are.

Is it a glaive, or a guisarme? Does the blade have a fluke mounted on the back, and is that blade curved on the concave edge? And why do I need to know this if it does the exact same damage as the more commonly-known halberd? That sound you hear is an entire population of otherwise rabid-for-the-rules gamers suddenly not caring anymore.

Figurines of Wondrous Power are sort of cool things. Little carved statues of animals that come to life and help you when so commanded? Neato. So much so, in fact, that the popular (and very broody) Drow ranger Drizzt had a companion, Guenhwyvar, who was a panther version of the figurines. However, every group always has its weakest member, and that dishonor falls to the Ebony Fly, who admittedly ?is the size of a pony and has all the statistics of a hippogriff??but in any case, it?s still a fly, which means it throws up every time it lands. Put that disgusting thing away.

This is one of those items that seems to be ubiquitous in lower-level treasure chests, because it?s magical, but useful only in some situations, and/or so underpowered so as not to be unbalancing in the least. (See also: Wand of Light, Potion of Gaseous Form, Ring of Sustenance). Chances are that if a character makes it to fifth level or so, he or she will have one of these in their stash of stuff, because not only are they everywhere, but they?re also rarely used. After all, it just makes you jump a little farther than you might otherwise. Whee-fucking-ee.

Admittedly, Ioun stones are some of the most useful magic items in D&D, as, depending on the color, they can give attribute bonuses, regenerate HP, absorb spells, or other genuinely helpful effects. But their usefulness is somewhat mitigated by the fact that to work, they have to rotate around the player’s head at 1d3 feet. This is only the tiniest bit noticeable to anyone who sees you, and because Ioun stones are the only thing that orbit around people’s noggins, it’s kind of like carrying your magic sword at the end of a ten-foot pole with a sign saying “Magic Sword; Please Grab at Your Convenience.”

This item could be a victim of its own hype. Call something ?the talisman of ultimate evil,? and you expect some pretty black shit, you know? But all this really does is open a flaming hole in the earth that swallows a cleric of good. Which is pretty ?ultimate evil? for that one cleric, I guess, but all things considered, that?s one limited one-trick pony. It might have been better for this item had it been called something a little more modest, but then ?flaming hole-opener? just brings up all sorts of other connotations best left alone at the gaming table.

Everyone buys one when they?re starting out a character, and no one seems to question it when you carry the thing around for the next few years?even when you want to pull it out of your backpack (like it was Mary Poppins? carpet bag or something?which come to think of it was just a Bag of Holding, wasn?t it?) and finally put it to use. Sure, it?s great to test the floor for traps, but no one thinks about where you?re keeping a pole that?s about twice your height? Try carrying around a ten-foot pole just for a day, and see how long it takes you to think ?fuck this, I?m putting this son of a bitch down.? The only way to carry a thing that tall would be hoisted over one shoulder?which would not only prevent you from being prepared for combat, but would also hinder maneuvering in most dungeons and take out your whole party in one swing Three Stooges-style if you turned around. Falling into the occasional pit trap here and there (it?s just d6 damage per 10?, you baby) is totally worth not carrying around something the relative height of an old-timey streetlamp.

Sort of a meta-item, I guess, because it exists in the real world?which makes it all the worse, really. And I?m not talking about the usual Crown Royale bag that you keep in a drawer with your rulebooks and miniatures; I?m talking about the dice bags that are meant to attach to your belt like it was a pouch of magical reagents or something. Even at a role-playing convention, this is thought to be taking the whole gamer-thing waaaay too far. And in a strange sort of circularity, it works in the same way that #10 on this list does?by completely emasculating its wearer.