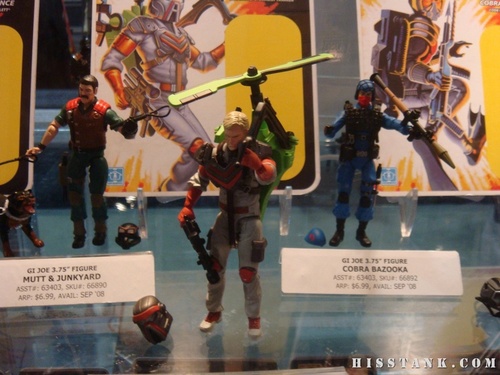 Remember that G.I. Joe poll which allowed fans to vote on the characters they wanted included in the 25th Anniversary line? Looks like the oddly named “Specialist Trakker” was one of the winners, and as rumored, he ain’t no Joe?he’s Matt Trakker, better known as the head of the Mobile Armored Strike Kommand, a.k.a. MASK. Hisstank.com snagged this pic of him in his new 3 and 3/4-inch glory, along with his mask (natch) and an odd helicopter backpack which should totally not sate MASK fans hoping for an actual in-scale vehicle. Specialist Trakker is part of Wave 11, and should be available in November.

As for a relaunch of MASK itself, getting Trakker and a few of his buddies in the new Joe line might be as good as it’s going to get. The MASK fansite Matt-Trakker.com reports that “Hasbro no longer owns the rights to the M.A.S.K. name or any variation. The marketing team had gone through SEVERAL versions including even calling it M.A.S.C. (Mobile Armored Strike Command) but nothing flew legally. This presents a huge challenge in terms of a re-launch.” Plus, retailers hate vehicles, since they take up so much shelf space, and vehicles were the whole damn point of MASK. I guess what I’m saying is, if you want a figure of Miles Mayhem, buy every Specialist Trakker figure you see.