Menu
Home
>
Movies
>
The Nite Owl’s Going to Save Krull 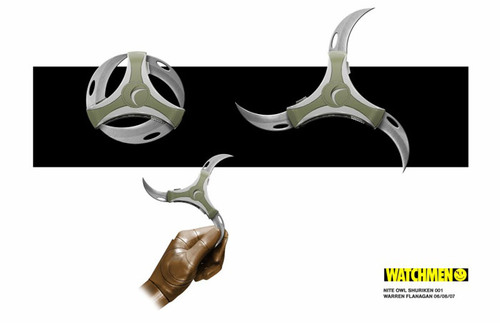 Io9 has pics of a Batarang Owlarang Glaive goddamned throwing star that apparently the Nite Owl will be tossing about during the Watchmen movie. Besides looking a lot like the goddamned throwing star from Krull, it also seems a lot like a Batarang, which…just seems wrong, somehow. I admit to not being totally up on my Watchmen, but isn’t the Nite Owl supposed to be kind of pitiful? Wasn’t his lack of Batman-esque technology in tghe graphic novel supposed to highlight his current crime-fighting impotence? I guess after the trailer, Zack Snyder’s earned the benefit of the doubt, but if Nite Owl and Rorschach get on Fire Mares to find the Black Fortress, I’m going to want my money back.