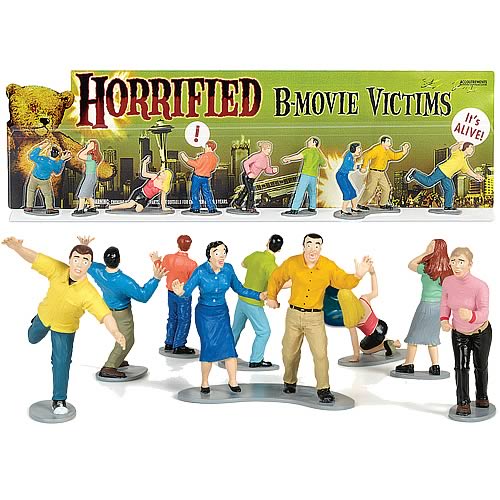 If you’re any kind of toy fan, I can’t imagine how you could pass up a chance to turn your favorite action figures into monstrous behemoths, raining terror and destruction down about these tiny, fleeing humans. This Accoutrements set includes eight tiny figures?each about three inches tall?in various states of distress/escape, and, as Entertainment Earth says, “One of them is a couple?so it’s like getting a 9th victim free!” You can order them here, and at $16 a set, they’re cheap enough that I can buy one to flee from my Masterpiece Voltron, one from my new Japanese girl in a Playboy bunny suit holding a machine gun vinyl statue, and last but not least, one set for my figure of Labyrinth-era David Bowie and his enormous package. I would have to think the latter would be most terrifying for the poor bastards, because some things truly are worse than death.