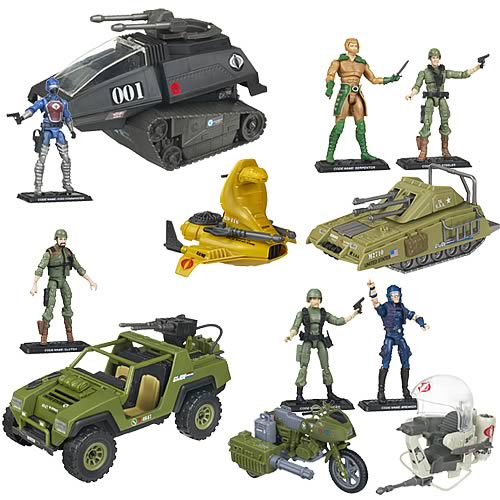 I saw these bad boys at Wal-Mart last night, and I instantly knew I had to tell the masses. As a card-carrying toy nerd for more than a decade, it boggles my mind how good toys are nowadays, and the fact that Hasbro is making them is just as amazing. Admittedly, these four G.I. Joe vehicles are just the old toys of our youth, but that’s exactly why they’re so awesome.

The wave contains these four sets and figures:
? Cobra HISS Tank with Rip-It
? Armadillo with Steeler vs Serpentor Chariot with Serpentor
? Vamp Jeep with Clutch
? Ram with Breaker vs Trouble Bubble with Tele-Viper

While I’m not a big fan of Serpentor, his chariot or the Armadillo, the rest of these are pure gold. If you had to define G.I. Joe by two toys, my vote would be for the Vamp jeep and Hiss Tank. The Hiss was so unique, and such a recognizable design that everyone who ever played with a Joe toy remembers the Hiss and what it looks like. And while the Vamp may be a nondescript jeep, I can’t remember a single playmate of mine who didn’t have one, myself included. And we all played with the Vamp more than any other toy, by default?we could run it down hills, crash it into figures, load it with firecrackers, and it always survived (admittedly, worse for wear). Also, I spent most of second grade wishing I had my own Trouble Bubble.

These things are only about $16 (or $63 for all four over at Entertainment Earth), so if you need one piece of Joe nostalgia, you could do a helluva lot worst than picking up one of these. Yo fucking Joe.