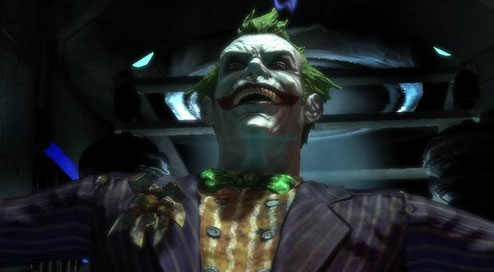 ? In only bit of Batman casting news from the past four months that has an iota of truth to it, Mark Hamill will be the Joker…in the Batman: Arkham Asylum game. There’s absolutely nothing wrong with that. (Via Kotaku)

? In the current issue of All-Star Batman and Robin out today, poor little Batgirl uses a naughty word. More specifically, there was a printing error that made the Frank Miller-written profanity?which should have been covered by a black bar?visible. Now DC, via Diamond, is asking all comic store owners to destroy the issue. I’m betting they’ll be on ebay in 3…2…probably five hours ago. I find it baffling that DC, if they were so concerned about not having profanity in their comics, would take the trouble to have the words fully typed and then overlayed with a black bar instead of just using the fucking black bar. Of maybe they should just ask Miller to stop using the word “fuck” in their all-ages Batman comic. (Via Newsarama)

? Someone finally got around to asking Philip Seymour Hoffman about these Batman 3 Penguin rumors, and, astoundingly, he had no idea what anyone was talking about it. I swear to God, I’m going to do my best to stop reporting on the Batman 3 casting nonsense…except for those rumors that reach Cher levels of insanity. This is my pledge. Now, whether I’ll have anything left to post about is another matter entirely. (Via IESB)