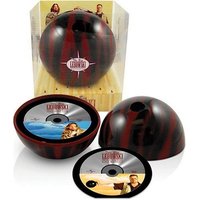 ? The Big Lebowski 10th Anniversary Edition
Fucking finally! A Big Lebowski DVD with some extras on it, including Jeff Bridges reading though the scrapbook he made each member of the cast after filming finished. The super special edition comes in the bowling ball case you see here, but there’s a regular slipcase for people like me who can’t stand awkwardly shaped packaging on their DVD shelves. As soon as this article is posted, I’m off to Best Buy to buy this sucker.

? The Forbidden Kingdom
Jet Li and Jackie Chan. In the same movie. And this was the best they could do. Sigh.

? Nightwatch
The stylish, Russian, supernatural action-thriller I haven’t seen comes to Blu-ray. It’s on my Netflix queue, okay? Lay off! Oh, Daywatch is available, too.

? Legion of Superheroes Vol. 3
Five unnamed episodes of the cartoon on Kids WB. Amazon recommends you buy this and Next Avengers together, which is all I think that needs be said.

? Spectacular Spider-Man: Attack of the Lizard
Three episodes of the new Spidey cartoon forming one 70 minute movie. Some folks say Spectacular is pretty good, so instead of saying something nice, I’ll just not say something mean. It’s the best my black, shriveled heart can do.

? The Sylvester and Tweety Mysteries: The Complete First Season
YOU CAN GOT TO FUCKING BE KIDDING ME