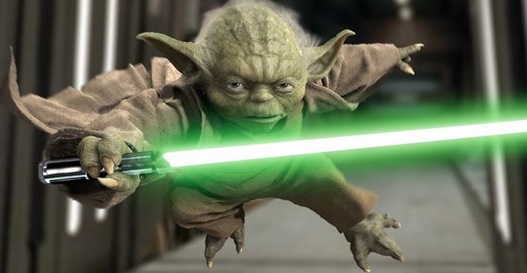 A lot of people complained in last week’s Fan Fiction Friday that FFF was the worst thing about Topless Robot, that they hated it, that it hurt them badly, that they wished I wouldn’t run it. One might think that I’d, oh, run a poll to see if you guys really want me to stop, to tone down the entries, or to swap it was some other weekly article. Instead, I’m going to bring you the most graphic Yoda sex I can find?with a below-age-of-consent Mace Windu, at that?because I’m a bad man.

Slowly, the master Jedi descended the staircase, his new Padawan following closely, surprised at how everything was unfolding. ?Two thousand years this passage has been here. Older then me, it is,? he added with a laugh. ?You have been chosen, young Windu. Today, the pleasures of initiation, you will discover,? the master said in a mysterious tone.

Mace shivered slightly as the path led him to a room with a large bay window and a large bed in the center as it?s only furniture. It was surrounded by water, like a small island, with a small bridge on either side to cross it. From the window, Mace could see the sun almost completely set and lights all around the city.

?Come to the bed, my child,? Yoda said warmly.

No one’s forcing you to hit the jump. Certainly not me.

?First, you must remove all of your clothing. To feel the force perfectly between us, there must be no obstacles.?

?My? clothing?? Mace suddenly became very nervous. ?You mean, I have to be naked??

?Yes, yes. Please hurry,? Yoda said with a bit of excitement and rush. The tone was unlike any he had ever heard from the creature, usually very much in control of his emotions and voice. But Mace was the student and he was committed to learning new ways; he obeyed with no additional word. Slowly and a little shy to be revealed in such a manner, he removed his Jedi robes. He had to roll partially on his back to remove his pants.

With only his underwear remaining to hide his nudity, Yoda said: ?Allow me.? And giving no time to respond, he slid the garment up his legs, revealing Mace?s cute uncut penis. The boy was a bit surprised from the feel of Yoda?s skin, soft and slightly wrinkled. He looked away, blushing a bit and missing Yoda?s licking his lips. The master finally finished removing it and threw it aside with no further ceremony and Mace could sit back as he was on the edge of the bed.

The thought of Yoda licking anyone’s nipples is so fucking horrifying I seriously want to drink myself into a coma. I’m going to have nightmares about it, and I just pray I also dream I have a baseball bat to knock the little bastard off my chest.

?Master, I feel that I am losing myself. Is this the dark side??

?No, dear Mace,? he replied in a tender voice in a rare display of informality. ?Only good there is here and pure will be our bonding.?

?Bonding?? the boy wondered, but he had no chance to let his mind wonder too far. Yoda had moved further along the bed where the pillows were, still laying on his back, his legs spread. He gave the boy his next instruction: ?Come to me now, and suck on my cock.?

If you think you’re scarred, you should kiss my clown feet that I left out the lengthy description of Yoda’s genitals. This story is so graphic that I can’t do much more than give you two more lines, lest we all get arrested. And I promise, hearing about Yoda’s little claws stroking things they shouldn’t is even worse than you can imagine.

But Yoda was a master not only of the force but at pleasure and knew how to make it last, even for one who would have trouble from shooting his load in too much of a haste.

Actually, now Yoda’s comments that both Luke and Anakin were “too old” to train make a lot more sense, don’t you think? And for the big finish:

The next day, Windu would wake up in his own room at the academy, fully dressed in his pyjamas, the only proof of the event having unfolded being a slight pain in his ass.

Please don;t read Bahamut Dragons’ full story here, because you will never be the same, and you will spend the rest of your life in pure agony, praying for the sweet release of death to free you from the knowledge of Yoda’s special Force-fucking techniques. Now, with that out the way, is anyone interested in me replacing Fan Fiction Friday with something else? Hmm?