You may have been surprised when the Earth wasn’t destroyed yesterday after the scientists tested the Large Hadron Collider, which makes particles slam into each other, much like my brother and I used to do with our Lego cars, except more scientific-like. At any rate, most folks worried that it would accidentally create a black hole, or set off an atomic explosion, or otherwise obliterate the planet in an instant, which…uh…didn’t happen. Still, as we now know, the real problem is when the LHC creates a rift in the space-time continuum and hordes of demonic aliens spill forth. Don’t believe me? Well, check out this pic from Joystiq: 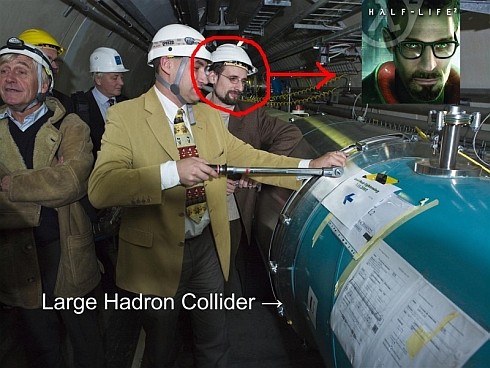 Yes, that’s Half-Life‘s Gordon fucking Freeman hanging out at the LHC, just waiting to learn on the wrong lever, accidentally touch the wrong button or just generally destroy humanity and start hitting things with a crowbar. Shit, we’d do better to have Homer Simpson over there. For those of you who are petrified with fear, feel free to use this amazing website, which uses scientific detection methods far beyond my comprehension to determine if the LHC has destroyed the world. Thanks to Ben for the tip.