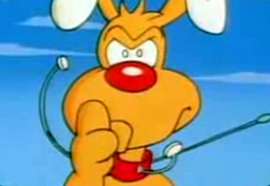 Sidekicks. Lackeys. Cronies. Seconds-in-command. Whatever you call them, they’re staples of cartoons, and from Barney Rubble to the latest anime superhero’s bespectacled friend, they’re all inferior to the main characters. That’s why they’re on the show, after all.
Yet some of them are recognized for their B-list accomplishments, both in cartoons and by real-life fans. Others never quite get the respect they arguably deserve, so we’ve decided to give the animated world’s most accomplished but under-recognized sidekicks, henchmen and other also-rans the spotlight they’ve been denied for so long.

It sounds like something you’d make up while drunk at a party. Yeah, Speedy Gonzalez had a cousin named Slowpoke Rodriguez. Seriously. But they won’t show his cartoons anymore because he was obviously a huge stoner.

Well, most of that’s true. Slowpoke was a laid-back country mouse who showed up in a mere two Looney Tunes shorts. In one, he sings the marijuana-positive version of “La Cucaracha” and is constantly hungry. He also has the ability to hypnotize Sylvester the cat, but we geek-culture wags can’t work that into a pot joke.

Slowpoke’s other appearance, in Mexicali Schmoes, was brief and involved him gunning down a cat, thus shamefully furthering the stereotype of Mexicans as people who may own firearms at some point in their lives.

Since the days of Gatchaman or Battle of the Planets or whatever the hell they called it, anime shows with color-coded teams have lived by simple directives: each group needs a steadfast (read: boring) leader, a sensitive (sexistly weak) woman, an energetic (insufferable) kid, a dependable (fat) guy, and a mildly cocksure but ultimately forgettable beta-male. In Voltron, that second-best team member is Lance, who’s basically there to play bad cop, or at least slightly headstrong cop, to team leader Keith.

He’s also there for viewers to confuse him with Sven, the guy who totally didn’t die and was really just poisoned at the start of the series.

Perhaps Lance should’ve been a little more enthusiastic during that big Voltron transformation. Then he’d have made a bigger mark than the show’s Space Mice.

She-Ra fans could’ve just bought He-Man toys if they’d wanted male counterparts for their line of mostly female characters, but Mattel insisted on making one easily dismissed guy for the She-Ra series. That Y-chromosomal throwaway was Bow, who served as an archer in comparison to She-Ra’s hands-on, up-close mode of combat. In all fairness, there was ample reason to ignore Bow, since he wore a Care Bear heart on his chest and was designed by someone who firmly believed that Errol Flynn mustaches looked good on cartoon characters.

That aside, it was still a little unfair that Bow wasn’t cut more of a break. In a community full of women with toy-friendly and inexplicable powers (such as the girl with the male peacock’s tail), Bow couldn’t find one to take a romantic interest in him, and possibly talk him into getting rid of that mustache. He also had to deal with He-Man’s frequent guest appearances, and any guy’s going to feel inadequate next to a barbarian whose case of muscle dysmorphia makes him bill himself as the most powerful man in the universe.

7) Igor and Nanny from Count Duckula

Count Duckula‘s title suggests some lazily made Hanna-Barbera cartoon with a single joke to propel it through 65 interminable episodes, but Duckula was made by Cosgrove Hall, the studio behind Dangermouse. That means it has plenty of dry British humor and a cast of strangely likeable screw-ups, led by the vegetarian Count Duckula. While he’s the most obvious Daffy rip-off this side of Darkwing Duck, he’s often the straight man to his two servants: the grim, exasperated Igor and the towering, moronic Nanny.

If Igor’s dialogue-driven humor was lost on many of the children who caught Count Duckula, at least Nanny wasn’t. An absentmindedly destructive nitwit, she’s the source of all of Count Duckula‘s slapstick comedy, and thus got a generation of Nickelodeon viewers to take in something more clever than reruns of Shirt Tales.

6) Ioz from The Pirates of Dark Water

By the laws of pulp fiction laid down by Star Wars, the Han-Solo type is supposed to get a reward for his endearingly roguish ways, be it some stockpile of riches or a woman who puts up with him. Ioz, the most scheming and pirate-like of The Pirates of Dark Water‘s good guys, didn’t really get much of anything. Like most Han Solo analogues, he follows the densely heroic Ren in the hopes of landing a huge cache of whatever Pirates of Dark Water consider treasure, but he’s eventually caught up in the quest to find 13 magical thingamajigs and save the grotesque world of Mer.

Like the kids who watched the show, Ioz was gypped when The Pirates of Dark Water got itself canceled after only 21 episodes. The story was unresolved, a bunch of the mystic doodads were undiscovered, and Ioz didn’t get his payoff in treasure or the affections of the leading female character, Tula. In shocking contravention of cartoon clich?s, she hadn’t yet fallen for Ioz or the alpha-hero. At best, Ioz caught the eye of a ghost ship’s captain.

5) Eric from Dungeons and Dragons

Nobody liked Eric. Even before the teenage stars of the Dungeons and Dragons cartoon went through some roller-coaster portal to the land of elves and twelve-signed dice, Eric was clearly the whiner of the group. His carping grew worse as the series continued, though he rarely griped about what we, as eight-year-old Saturday morning viewers, would’ve griped about: the fact that he had armor and a shield, but no actual sword.

Even the show’s head writer, Mark Evanier, hated Eric, and with good cause. According to Evanier’s recollections, Eric was the creation of parents’ groups, and he was there to be wrong about everything. This would, in theory, show kids that you should always go along with the majority’s opinion, lest a giant frog monster with 800 hit points devour you. Evanier hated the idea so much that he later parodied it with the brainlessly agreeable Buddy Bears on Garfield and Friends, though he could also take heart that any sensible kids would inevitably figure out the value of having a mind of your own. And then they’d also realize something about Dungeons and Dragons: Eric may have been wrong most of the time in a cartoon, but he was right about real life.

4) Evil-Lyn from Masters of the Universe

Shows like He-Man and the Masters of the Universe were essentially boys’ cartoons, yet that didn’t stop them from sticking in some backhanded girls-can-too lessons. Evil-Lyn, for example, was arguably the most efficient (or least retarded) or Skeletor’s many underlings, and she silently planned on deposing the skull-faced tyrant once the chance came. She was very much a smarter version of the Transformers‘ Starscream, who screeched about his plans to bump off Megatron at the slightest opportunity. In the long run, Evil-Lyn even proved more dastardly than Skeletor, who turned into a big sniveling softie during the He-Man Christmas special.

In the original Masters of the Universe series, Evil-Lyn never quite got her due, and episodes often had her fighting He-Man’s gal pal Teela, because ’80s cartoon were written by high school sports committees where women were only allowed to fight other women. Even the Masters of the Universe movie didn’t do her justice, not that anyone could expect justice there.

3) Spike from My Little Pony

Just as cartoons for boys needed at least one token female character, girls’ cartoons were required to have a semi-useful male on hand. The pastoral lesbian commune of My Little Pony had Spike, a young dragon who joined the multicolored horses after they defeated Satan Himself in their first TV special. Spike must’ve grown up slowly, as he lived through several generations of ponies without ever aging. Nor did he grow much of a spine. He was dragged into all sorts of pony-related nonsense, whether it was an invasion of lava demons or a case of Baby Lickety-Split throwing a prima-donna bitchfit and running away from home.

And how do the ponies thank Spike for his years of service and his unspoken willingness to watch all of his equine friends age and die before his eyes? They throw him around like a volleyball, if the cartoon’s intro is any indication.

Fine, fine. Knock him in the water and laugh. Just pray you’re not around when he’s a full-grown dragon and all of you look like tiny, pony-shaped Skittles.

Blitzwing started off like a lot of Decepticons on the Transformers cartoon: as a treacherous, none-too-bright thug who faded into the background after a few episodes introduced him and his toy. For most of the second season, Blitzwing seems even dumber than the average Decepticon.

Yet fate and the show’s writers smiled upon him, and shortly after the Transformers film, Blitzwing grows a brain. In the five-part serial that kicked off the post-movie TV season, a bunch of five-faced villains called the Quintessons allied themselves with the Decepticons in an elaborate bid to, well, take over everything. Only Blitzwing has the sense not to trust them. Upon discovering their plot, he’s smacked around by his disbelieving leader, Galvatron, and, in desperation, tells the Autobots what’s really going on. The episode ends with the Quintessons being thwarted and Blitzwing getting booted from the Decepticons, even though he just saved every Transformer in the toy universe.

For all of his trouble, Blitzwing was essentially written out of the series. Later episodes were supposed to focus on his defection, but they were re-tooled to focus on another Decepticon with a newer toy. Blitzwing only appeared as an extra among the Decepticon force in a few subsequent episodes, since animation errors are as much a part of the Transformers as that onomatopoeia-resistant transforming sound.

The unappreciated sidekick par excellence of ’80s cartoons, Brain shadowed Inspector Gadget on each of his missions and, along with the inspector’s niece Penny, saved his completely oblivious ass in every episode. He and Penny also helped distance the show from its obvious Get Smart roots, which were all the more important when Get Smart star Don Adams was actually voicing Gadget.

On the surface, Brain and Penny were equally unrewarded for their efforts (as was the show’s second-season sidekick, Corporal Capeman, but the less said there, the better) However, Brain worked the hardest, venturing into harm’s way time and time again, while Penny spent half of her excursions hacking out solutions on her computer book, which Apple has noticeably failed to recreate today. As a non-dog, Penny was also capable of speech and Vatican-approved free will, so she could voice any objections (though she never did). And, for one final insult, a 2001 Inspector Gadget revamp replaced Brain with two robots for all but a single episode and “retired” him, possibly to one of those nice-but-unseen farms in the country where all mysteriously absent dogs go.