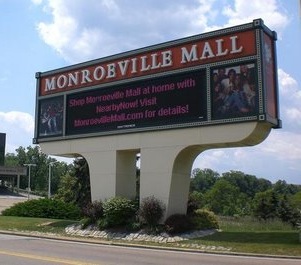 It?s high time to celebrate the season of nerd triumph that just passed us by. It was a summer packed with more comic book movies than any other in history and, amazingly, they were all pretty good. Iron Man taught us that Gutter from PCU is a director to watch and The Dark Knight made people forget all about Nicholson?s hammy Joker. Hellboy II:The Golden Army and The Incredible Hulk may have got lost in the shuffle, but they?re both way better than The Spirit is going to be. These were all valuable lessons to be learned, but did you do anything else with these past three months other than go to your local cineplex?

There?s a whole country out there to see, packed with excitement, adventure and, well, more movie theaters. Sure, gas is expensive and you need to save up for all of the Watchmen merchandise that is coming out, but why not spend some of your free time at America’s greatest geek destinations? Here?s a look at some off the beaten path tourist traps and other great sights that are sure to please your inner nerd.

10) The Toynbee Tiles of Philadelphia 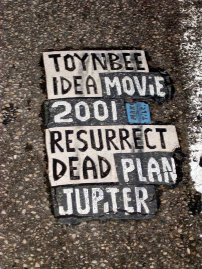 When David Lynch lived in Philadelphia in the late 1960s, his disturbing experiences there inspired him to create Eraserhead. That sounds about right. While the city?s tourism board would never admit to it for fears of impacting sales of cheesesteaks and Liberty Bell tchotchkes, Philly is a damn strange town. Over the years the City of Brotherly Love has seen its share of bizarre behavior?from the crimes of Gary Heidnik and Ed Savitz to unhappy Eagles fans pelting Santa Claus with snowballs. But nothing is odder than the Toynbee Tiles. Featuring the inexplicable message ?TOYNBEE IDEA IN KUBRICK?S 2001 RESURRECT DEAD ON PLANET JUPITER,? the tiles are made of linoleum and adhered to the asphalt using sealant, tar paper and the weight of passing cars and pedestrians. Referencing British economic historian Arnold Toynbee and Stanley Kubrick?s 2001: A Space Odyssey, they have been interpreted as street art and the physical manifestation of someone?s mental illness.

Although the plaques have appeared in cities throughout the United States and as far away as Brazil, Philly is long thought to be the birthplace of the tile phenomenon (the area certainly has the most of them). Except for some tight-lipped documentary filmmakers from the town, no one knows who the tiler is or what point he or she is trying to make. The past few months have seen a dramatic increase in the amount of new tiles affixed throughout Philadelphia, so much so that tilespotting has become a popular pastime amongst geocachers and tourists. If you are considering your own scavenger hunt, visit www.resurrectdead.com for more information on the tiles and their ever-increasing locations. 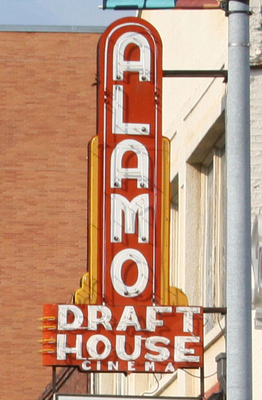 Since debuting as a bar/eatery/second-run movie house in 1997, the Alamo Drafthouse has expanded from its humble origins into a business juggernaut with franchises throughout Austin, Texas, and the surrounding areas. Best known for their film festivals (including the Ain?t It Cool News Butt-Numb-a-Thons and the annual Fantastic Fest celebration of ?badass cinema?), the Drafthouses prove that showing a mixture of repertory films and new releases can be artistically satisfying and turn a profit at the same time. Obviously the downside to visiting one of the Alamos is that it will make returning to your local theater a somewhat painful process. Proceed with caution? 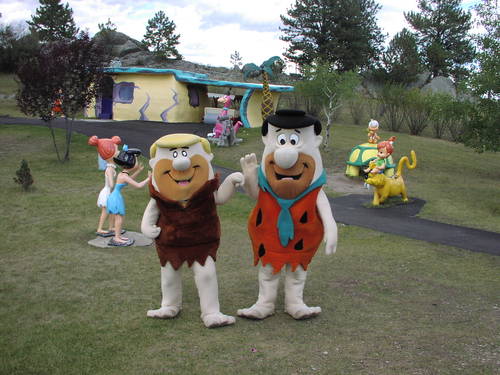 Taking a page right out of history, this Flintstones-themed campground/mini theme park in Custer, South Dakota, showcases an eerily recreation of Fred and Barney?s stomping grounds. From statues of your favorite Flintstone and/or Rubble to a stage show in which Fred, Wilma and Dino teach you about the wonders of prehistoric life, Bedrock City aims to transport you back to the Stone Age. Although the attraction is officially sanctioned by Hanna Barbera, it feels more like a down-home mom-and-pop operation than a sterile corporate entity. Not sold yet? Two words: Bronto Burgers. If you couldn’t make it to the park before it closed for the season on September 1st, there is a similar destination located in Valle, Arizona, that is open year-round. That one features a brontosaurus slide for all of your yabba-dabba-dooing needs.

Are there too many mutha uckas uckin? with your shi-? A great way to escape the inner city pressure is to stop by some of the locations from HBO?s Flight of the Conchords series. Since the unexpected success of the show last year, the Chinatown exterior of Bret and Jemaine?s apartment (25 Henry Street) has become a tourist sensation. Those of you whose enthusiasm for all things Conchords has reached Mel-like proportions can check out an intensely detailed visitor?s guide to the show?s locations at here. With filming of the show?s second season ramping up, you may even get a chance to see one of Bret?s animal shirts up close and personal.

What do you do if you live in a town that shares its name with the Man of Steel?s chosen residence? Duh, you milk it for all that it?s worth. Since officially being declared the ?Hometown of Superman? in 1972, the city of Metropolis, Illinois, has put itself on the map by catering to comic nerds obsessed with anything even remotely related to the Son of Jor-El. Sure, it may look like a Podunk Midwestern town, but Metropolis is really the ?City of Tomorrow.? Well, maybe not, but it does have a massive Superman statue in front of the Massac County Courthouse that doubtlessly stands for ?truth, justice and all that stuff? as well as a museum dedicated to the character and an annual festival each June that features celebrity guests alongside of the requisite costumed fanboys who really oughtta know better by now. Most dudes don?t have a super enough physique to don the tights. And yet they still do. My eyes, they burn!

Seattle?s Science Fiction Museum and Hall of Fame claims to ?promote awareness and appreciation of science fiction literature and media while encouraging visitors to envision new futures for humanity.? That makes it sound like learning is going to be involved, and learning is boring. What the publicity should tell you is that the museum is really just like the world?s coolest Planet Hollywood?minus the Stallone and overpriced chicken fingers. Featured in the same incredibly ugly building as the Experience Music Project, the museum showcases props, costumes and memorabilia spanning the history of sci-fi. Heavy on the genre?s mainstream successes (expect plenty of Planet of the Apes, Star Trek and Star Wars stuff), it also spotlights an exhibition hall celebrating sci-fi pioneers from literature, TV and film. And yes, you can actually learn about how science fiction is used to analyze and comment upon the human condition. Or you can just stare at the Daggit they have on display. The choice is yours. 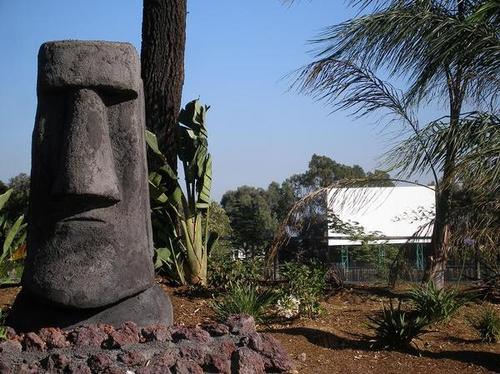 In an sixth-season installment of The Facts of Life, Blair, Jo, Natalie and Tootie struggled to save a dilapidated drive-in theater that was scheduled to be closed due to lack of ticket sales and general disinterest. By the episode?s end , the girls realize yet again that the world never seems to be living up to their dreams and they are forced to accept that the drive-in theater is dead. Clearly Eastland was a crappy school, because in some parts of America the drive-in is still thriving. Exhibit A: The Mission Tiki Drive-In Theatre in Montclair, California. Operating for a staggering 52 years, the outdoor movie venue showcases four screens of first-run films (a complete overhaul of the theatre in 2006 ushered in such upgrades as new FM transmitters to broadcast the audio of the various films playing and the transformation of ticket booths into tiki huts). Equally renowned for its kitschy atmosphere and a weekly swap meet that brings together junk lovers from throughout Southern California, the Mission Tiki proves that classic Americana never dies, it just gets a Polynesian-themed makeover.

On a seemingly ordinary Park Slope street lies the most powerful retail store on the planet: the Brooklyn Superhero Supply Company. Upon entering, customers have the opportunity to purchase items ranging from canisters of X-ray vision to capes and utility belts that can be utilized in the ongoing battle between good and evil. In reality, the store is actually a fundraising front for 826NYC, an equally heroic non-profit organization that helps area students develop their writing skills. (Keeping with the secret identity theme, 826NYC?s headquarters are hidden behind a bookcase at the back of the store). While the items on sale may not be functional, they both support a worthy cause and look great alongside your collection of superhero action figures.

What?s the only thing better than a vintage arcade? A vintage arcade that serves beer. Lots and lots of beer. Portland?s Ground Kontrol features an assortment of classic arcade games (Asteroids, Tron, Frogger, Q*bert, Donkey Kong, Rampage World Tour, etc) and obscure pinball machines aplenty (including a Doctor Who game that is the singe most geekgasm-inducing machine that you are likely to see in this or any lifetime). The location also regularly hosts live music from various indie rock bands and includes a store peddling vintage Atari and Nintendo consoles/games. And there?s various types of beer available too, though I may have mentioned that already. If you are stuck on the East Coast with no chance of making it to the Pacific Northwest, check out Brooklyn?s Barcade, another place to get drunk from nostalgia and cheap suds.

When there’s no more room in hell, the dead will?check out the values and savings at the beautiful Monroeville Mall! Located outside of Pittsburgh, this shopping mecca was immortalized in Dawn of the Dead. To this day, fans of George Romero’s zombie masterpiece make pilgrimages to the mall in order to check out where Roger, Peter, Francine and Flyboy made their stand against legions of the undead. Surprisingly, mall management has actually embraced the property’s role in horror movie history and sporadically features Dawn of the Dead-themed events (including a 2007 Guinness World Record-making fundraiser for the Greater Pittsburgh Community Food Bank that featured over 1,000 participants dressed as zombies). For Romero fanatics, a visit to the Monroeville Mall is the next best thing to being on set during the film’s production in 1977. Even if they can’t slide down the escalator at JC Penneys.