Menu
Home
>
Miscellaneous
>
The 7 Greatest Apes of All Time

Apes are pretty rad. They’re like you and me, what with their similar genetic makeup, highly-developed brains, and predilection for using poop and pee for infantile amusement. They’re also a lot hairier than us, have funny little hand-feet instead of feet, and possess frightening strength for being so intelligent. Usually it’s understood that the smarter something is, the less likely it is to rip your arms off. Not true with apes.

They’ve also been known to have hilariously brightly-colored asses, fling poo at passersby, urinate into their own mouths, and dance around in fezzes, collecting petty change for Italian stereotypes. To reiterate, apes are rad, and to celebrate all the good times apes have given the human race, here’s a list of the Top 7 Greatest Apes Ever.

Pretty obligatory, I know, but King Kong’s legacy as the most iconic ape in the world of show-business apes remains mostly unchallenged in the past seventy years. Never mind some of the lamer projects he’s lent his name to in the more recent past?unauthorized sequels, a grudge match against Godzilla that ended in a stalemate for marketing reasons, and a malfunctioning animatronic at Universal Studios?King Kong did awesome things in movies before movies were fully prepared to play host to such awesome things. He wrestled dinosaurs and stomped on dudes without the help of a single computer.

6) Rick Baker in a Gorilla Suit 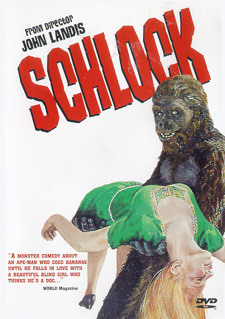 Rick Baker is one of those few Hollywood guys who is unchallenged in his craft?and rightfully so. He’s won more Oscars for makeup than even Meryl Streep, and has supervised more prosthetic monkeys and zombies and werewolves in films about such things than anyone. So it’s awful humbling to know that the man has spent an inordinate amount of time dancing and parading about in a wide variety of gorilla and monkey suits, from the elaborate?like in Gorillas in the Mist?to the endearingly campy, like in Schlock, pictured above, or The Thing With Two Heads. All I’m saying is that it’s admirable, earning dozens of accolades and becoming incredibly successful after wearing monkey suits for so long.

Of all the ideas for any TV series, Lancelot Link is perhaps the best, ever. You make a spy spoof, a la Get Smart, except all the characters are monkeys in funny clothes! In the early 1970s! And Mel Blanc! Mel fucking Blanc! That this show didn’t win a Humanitas award simply for existing is beyond me. Its legacy was short-lived, sadly, as only one season was ever produced, thereby denying the world of crime-solving, funny-hat-wearing chimp antics. 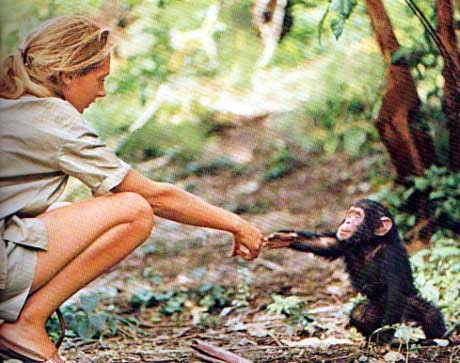 Now, apes, especially chimps, are smart. Supposedly. Jane Goodall is not a chimp, and does not look like a chimp in the slightest. She wears clothing, first of all, is not covered in thick black hair, and doesn’t frequently pause to groom others for delicious ticks and parasites. Despite this, she managed to convince chimps everywhere that she was, in fact, a chimp. Some people think she did this to prove how closely related we are to chimps by showing that a human being could, in the 20th century even, still function as a part of their society. But really, who wouldn’t want to hang out with chimps for a little while? Provided you didn’t piss them off and subsequently have your head decapitated by your intestines, which would then be eaten or used as clubs to kill other chimps. Aside from that, though! Spending all day sitting in trees, scratching yourself, eating bananas and figs and smaller monkeys or whatever. Sounds like a party. 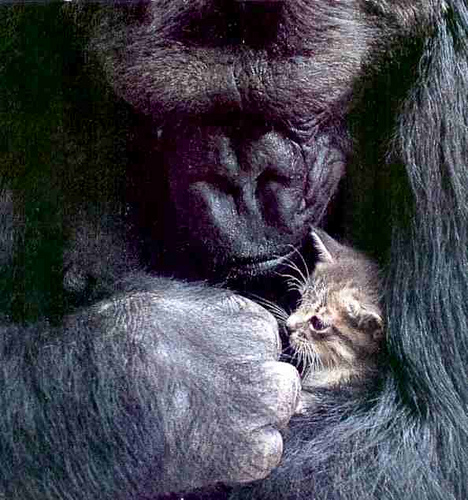 Gorillas are awesome, but for all of their awesomeness, I would never want to meet a Gorilla in a dark, abandoned alley. I would crap my pants, and the gorilla, sensing my fear, would charge forward in a blind rage, sending bits and pieces of me scattered across in a fifty-yard radius. One gorilla, though, I would marry if I could (provided it were legal and, uh, not weird to do so)?Koko the Gorilla. She speaks sign language, so communication would be no problem. And anyone unfamiliar with Koko’s heartwarming friendship with a stray kitten must do themselves a favor RIGHT NOW and load up Wikipedia and research it?you will feel all warm and elated and go around hugging everyone. In times of strife and war and stress, just remind yourself that a several-ton gorilla and a tiny, defenseless kitten can be the best of friends and be happy, damnit.

In the history of smart apes, Dr. Zaius is the smartest. He’s a fully accredited doctor, and are we even sure that the Planet of the Apes has any institutions of higher learning of any particular merit? Or did he gain his immense knowledge and wisdom from some of the charred remains of the former planet earth? My apologies if I just spoiled the twist ending of a movie that has been endlessly discussed and lampooned for forty years, now. Regardless of where Dr. Zaius got his doctorate, he’s one smooth dude with an awesome beard. He’s also the subject of one of the best songs on The Simpsons! If I were on the Planet of the Apes, Dr. Zaius would be my number one ape-man-crush.

Take one part blatant rip-off, another part insane Japanese naming conventions (he’s stubborn, like a Donkey! And he’s like King Kong! GET IT?!), and Nintendo creative mastermind Shigeru Miyamoto’s brilliance in deciding that the best game ever was to feature a stocky Italian hopping over barrels and hitting flames with mallets while a Machiavellian ape lustfully kidnaps a damsel in distress, and that there is the recipe for the Greatest Ape Ever. Donkey Kong is so completely bizarre and yet so pop-culturally significant, signaling that after Pac-Man, video games with clearly defined characters were what people wanted to play. Now Donkey Kong wears a ridiculous tie and saves his bananas from CGI crocodiles and whatever, which isn’t quite as cool as tossing flaming barrels t small Italian men, but still works well enough.