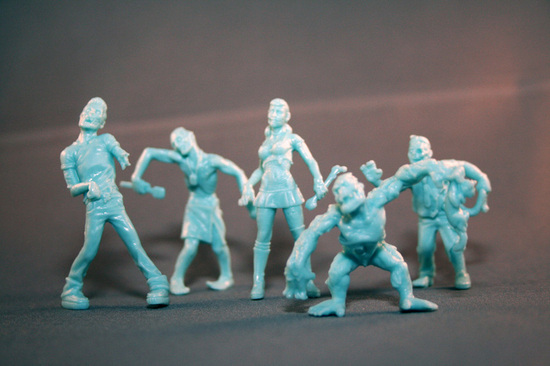 Of the many things I love unconditionally, both M.U.S.C.L.E. men and zombies are pretty high up on the list. So when I first heard about October Toys‘ Z.O.M.B.I.E.S., a.k.a Zillions of Mutated Bodies Infecting Everyone, I had to get my grubby monkey paws on some. They do not disappoint; at 2-3 inches tall, they’re basically a peanut butter/chocolate combination of the old pink rubber wrestlers and the living dead. Despite being so small, they’re intricately, beautifully sculpted, which is damed hard to capture with a camera, so take my word for it.

All five figures are included in each $5 pack, and you get to choose from white, light blue, neon green and glow-in-the-dark, and if you order all four, you get free art cards of the five Z.O.M.B.I.E.S. characters are depicted by a bevy of alt-artists, which are pretty goddamned swell. I highly recommend the four-pack (because no one can really ever have enough zombie toys), but at $5, it’s kind of criminal to not get at least one. Seriously, if October Toys doesn’t get a chance to make at least a few more waves of Z.O.M.B.I.E.S., there will be no justice in the cruel world. Order ’em here, and tell ’em TR sent you.