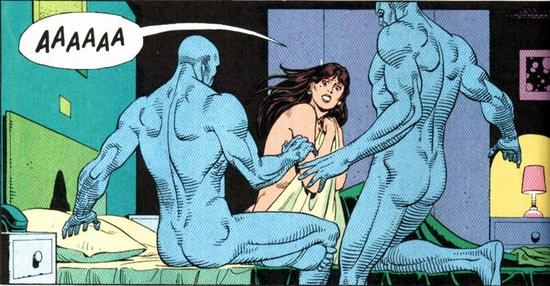 Sci-Fi.com has a swell but non-embeddable video of a behind-the-scenes look at the Watchmen movie, namely the arduous process of turning Billy Crudup into Dr. Manhattan. Intriguingly, they had Crudup wear a suit covered in blue LED lights so that ever after they replaced him with his CG version, he would be emitting a natural, realistic blue glow?he even had lights on the bottom of his feet. Even if you’re not interested in this tiny piece of movie magic, it looks like the video has a few brief scenes that weren’t in the trailer, so it’s definitely worth checking out.