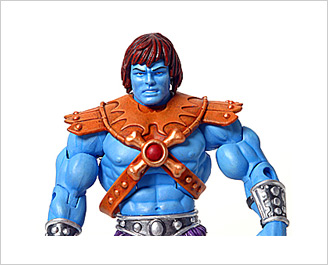 Weird. I know He-man and Beast-Man are the first two Masters of the Universe Classics figures, due in December from Mattel’s MattyCollector.com. So why is Mattel offering this second He-Man figure as a New York comic Con exclusive? I’ve poured over the two pictures, but I just can’t see any difference between this one and the first He-Man. And I have no what sticker Mattel is referring to:

That’s right, in addition to the February figure Stratos?, Faker? will also be available at NY Comic Con (with additional supply available in March here at MattyCollector.com). But get him first at the show!
…And yes, he will have the computer graphic under his armor! We wouldn’t do the fans wrong!

Bizarre, right? I guess you can get whichever He-Man you want, as they are totally identical in every way. It obviously doesn’t matter.