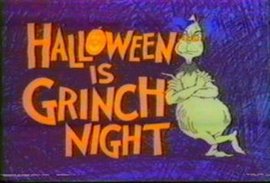 The geniuses in Hollywood know a winning formula when they see it. Kids love Halloween, and kids love, well, kid shows. After all, two great tastes should always taste great together! Right? Unfortunately many successful intellectual properties are sucked into this illogical farce on a yearly basis with mixed results. Some properties win big with Halloween themes, while others fail spectacularly. Others still, are merely forgettable oddities. TR separates the wheat from the chaff to reveal the animated Halloween specials that, though slightly bad, made the best of their awkward natures.

Jim Davis’ orange cat had a way of starring in 30-minute specials more interested in musical numbers than an actual plot. Most of them were cute enough. There’s something particularly moving about seeing the usually dour Garfield emote, let alone boogie-down with a smile on his face. While this Emmy-winning special manages to entertain the child within, there are a few key scenes that seem troubling in retrospect. For example, Binky’s demeaning monologue at the start of the special, perhaps hilarious to the leaner kids of mid ’80s, hits close to home for a modern crop of children plagued by obesity. To make matters worse, the forever chunky Garfield chases candy with abandon, which comes off as a big middle finger to those having to monitor their blood sugar. Would it kill that cat to suffer the consequences of his poor fitness regimen and improper diet as an example to malleable children? Actually, it probably would.

A pseudo-Halloween special, this episode of DuckTales sees Scrooge get screwed out of a few investments by actual monsters under his employ. These monsters stay in one of his water-side hotels and destroy it in a fit of rock-star party rage. A lot of duck-ized versions of classic movie monsters make appearances, including a Dracula character that likes to eat apples. This episode isn’t terrible, but it’s not nearly as good as the Transylvania level of DuckTales on the NES. At least in the video game, Scrooge gets to bash his enemies’ heads in with his cane.

Apparently Whoville has it’s own version of Halloween called “Grinch Night,” and just like America’s favorite pagan holiday; it starts when the leaves change, the breeze turns sour and a fat green man states, “It’s a wonderful night for eyebrows.” To call this 1978 TV special anything but awful is an affront to sanity. In the Grinch’s opening solo number, he cackles about dancing alone in the Whoville town hall while thrusting his shaggy hips in a fit of bastardly lust. To make matters worse, the Grinch never finds redemption the same way he does during Christmas time?he’s simply driven away from Whoville by a nerdy child’s logic. Let’s all hope Dr. Seuss donated his royalty checks from this steaming pile of crap to charity in penance.

Forget that a universe where Pac-Man lives a personified life, complete with all the comforts of home is inherently bizarre, the redundancies of this Halloween episode insult logic on a level comparable to the placement of Disney character’s clothing. On Halloween night, Pac-Man and family (including his um?Pac-Dog and Pac-Cat?) hit the streets for power pellet treats. Eventually those darn ghosts get involved and chase members of the Pac family into, get this, a haunted house. This conjures up some deep philosophical questions about what exactly the ghosts in the Pac universe really are. Disembodied spirits chained to the earthly plane? Or perhaps it’s Pac-Man who is dead, forced to run from his own personal demons in Pac purgatory? Either way, it’s kind of a cop-out to compare the Pac ghosts to, well, actual ghosts.

Because an episode isn’t an episode without a “Koopa” pun for a title, the Super Mario Bros. Super Show introduced this loosely Halloween-themed short. Mario, Luigi, Toad and the Princess take a trip to Turtlevania where King Koopa has decided to go Goth for the weekend, taking up the name Count Koopula and donning a cape. The plot of the episode revolves around Koopa manipulating the Mario Bros. via their stereotypical penchant for Italian food. At one point, probably just to be jerks, they get Toad to down an entire clove of raw garlic. There’s another episode in the series with a Halloween theme. It’s a “Frankenstein” parody cleverly titled, “Koopenstein.” It ends with a mecha battle. Watch it instead?

5) Alvin and the Chipmunks: Trick or Treason

Despite the ear-piercing songs, wobbly, off-model animation and inane story, this special should succeed in terrifying children who don’t fit in. When a neighbor kid stands out because of a birth defect, the other children ostracize and humiliate him on a daily basis. Especially cruel are the cool kids who can afford hair gel. Being the prick that he is, Alvin decides he’d rather hang with the mailbox baseball crowd than Quasimodo, which threatens to rip apart his family. Eventually Alvin double-crosses the bullies, saving the sweet neighbor kid (who is repeatedly referred to as “Pumpkin Head”) from a Halloween prank. The heartwarming special ends with a child dressed as Satan suggesting “Pumpkin Head” have plastic surgery to fix his malformed face?could this have actually been a Batman villain’s origin?

There are only two words in the English language powerful enough to crush any holiday: Rankin and Bass. R&B’s crazy “animagic” (a term cosplayers should really appropriate for an awesome new purpose) style is fun for kids who like to imagine their action figures coming to life, but it’s ultimately jerky character movements only succeed in repelling the majority of potential viewers. To be fair, “Mad Monster Party?” despite questioning itself in its own title, is actually pretty cool. Written by MAD Magazine‘s Harvey Kurtzman with character designs by EC Comics’ Jack Davis, the special is risqu? enough to be kitsch and dated enough to be confounding. Why does suffering from a terrible case of anorexia make Phyllis Diller’s character a monster? Who cares! Dr. Frankenstein is having a crazy retirement party and all of the classic movie monsters are getting into drunken brawls. Not only that, his incompetent nephew is the only thing that stands between the hooch-fueled beasts and the anti-life equation (or a reasonable facsimile). Odd? Yes. Awesome. You bet.

Never content to attempt killing the Power Rangers with a remotely efficient villain, Rita sends The Pumpkin Rapper to wreak Halloween havoc on Angel Grove. Armed with vine powers, the ability to turn regular putty soldiers into pumpkin-headed putty soldiers and a speech disability preventing him from speaking in any non-rhyme cadence, he is swiftly gunned down by the rangers, who are late for a Halloween kegger or something. Though the pumpkin-headed menace misses his chance to transform into a giant pumpkin-headed menace, he’s recycled in a later ‘Rangers episode.

The oldest special on the list, this nearly three-decade-old Chuck Jones special features animation that is arguably as good or better than a lot of tripe from even ’80s and ’90s children’s films. Problem is, it stars Raggedy Ann & Andy. The saccharine plot (the dolls bring together an unloved pumpkin with a miserable child) is nice enough?especially for kids. The movie dolls are very kind and even a little funny, but it’s all a front. In real life, Raggedy Ann dolls look like murderous clown wenches who feast on the souls of lost children. See the disparity here? What aims to be a cute children?s film succeeds only in reminding adults of their fear and loathing of face-laden rags.

Chucky was already pass? by the time Urkel’s evil Ventriloquist dummy double gained sentience and terrorized the Winslows, but it didn’t stop series writers from using him in two Halloween episodes. Stevil’s second appearance proves to be the far more dramatic and ridiculous of the two, when the diabolical dummy makes a play to steal Urkel’s soul?and succeeds! To make matters worse, Stevil brings an evil doll version of Carl along (named Carlsbad, you know, like the caverns). Considering how badly the series had decayed since it’s heyday in the early ’90s, it’s not hard to believe the climax of Stevil’s 1997 visit manifested in the form of a dance-off with Carlsbad (yes, it is as insane as it sounds), but it is a painful reminder of just how badly one show can taint a holiday.