Menu
Home
>
Daily Lists
>
7 Reasons Why Mr. Robot Is Better Than True Detective, Hannibal and Every Other Show This Summer 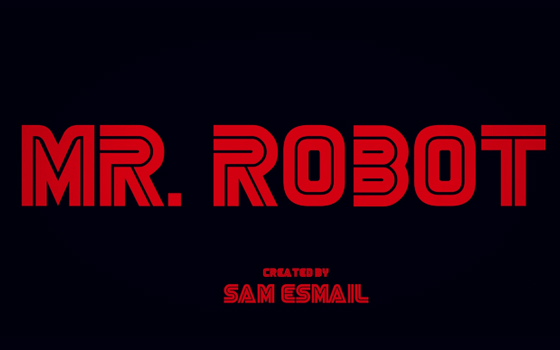 Summer television was once the place where good (but usually very bad) TV went to die a merciful death away from the eyes of the public… and advertisers. It was the place networks dumped their undesirables and under-performers. However, while the ratings may not have changed, the quality of the programming certainly has. This year, though, a new show came along that seems to have taken the potential of summer television to the peak of its awesomeness, and that show is USA’s Mr. Robot.

But how? How can it be said a new series from USA, of all places – you know, the network that gave us such classics as Pacific Blue and Rush – is better than the likes of HBO’s True Detective or NBC’s Hannibal (both of which just moved into the summer season this year)? Well, for starters…

1) Rami “I Could Listen to You for Hours” Malek 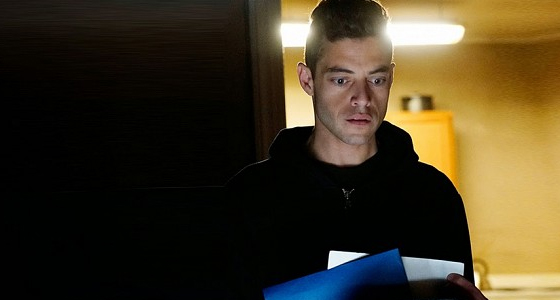 For starters, we have to talk about the thing that’s been in the audience’s face about the show since its series premiere: lead actor Rami Malek. A veteran of HBO’s The Pacific, Malek is the biggest factor that makes Mr. Robot feel as alive as it does. The actor’s take on the character of Elliot, an isolated, vigilante hacker with a major drug addiction, is far and away the most unique performance going this year. And, while the writing of the character is so pitch-perfect that, in theory, anyone could play him, there’s really no one else that could make Elliot sing the way Malek does. Something about the actor’s look and presence slides perfectly into the way we may imagine a young person, living in today’s world who can’t find a way to connect with it, would operate.

In addition, Malek takes voice-over to a whole other level with Elliot’s constant breaking of the fourth wall. When he speaks to us, his imaginary friend within the context of the show, we feel it because the actor’s still making sure to be as engaging on the mic as he is in front of the camera. We can hear the tension in his voice and feel the fear in his heart as he tried to save his aloof neighbor from certain death, and break into a digital vault so secure that it makes Langley look like a locker-room padlock.

Truth be told, in terms of audience interactions, Malek’s Elliot is nothing short of a ground-breaking performance the likes of which television hasn’t seen since the early days of Dexter Morgan (very early days) and Malcolm from Malcolm in the Middle (the really, really early days). 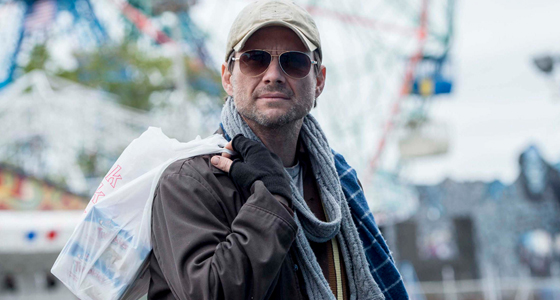 Christian Slater is a man of many talents, but he’s also a man that hasn’t had much of a break on the success front in recent years. Sadly, gone are the days where the actor could simply punch John Travolta in the face to make a living. Now, he must prove to the world he can do what he does, and do it well. Luckily, Mr. Robot is a great vehicle for him to do just that.

While Slater’s character, simply known as Mr. Robot in the show, at first feels like a terroristic buffoon, we soon begin feeling like he actually cares for Elliot… as long as Elliot’s willing to play ball. This is perhaps seen in no greater affect than in the scene where Elliot wakes up from having just gone through withdrawal only to find himself alone in a ratty motel room… that is until Mr. Robot appears from the shadows, promising never to leave the hacker’s side. It’s a true moment of bonding between the two, and it’s a moment that really hammers home the depth Slater’s bringing to the show’s table.

However, if the character were ever handed a John Travolta punching bag at some point, there would be no arguments here. 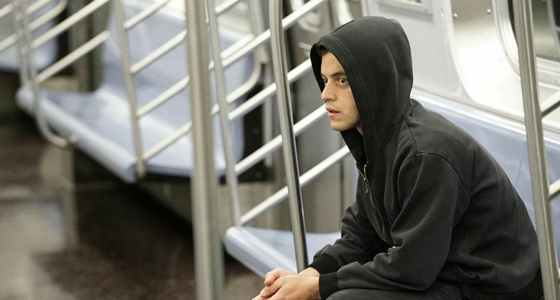 When it comes to creating new television shows, particularly when it comes to the pilot, there are certain story rules all writers are ordered follow. Never use voice over. Never focus on a single character. Be sure to add A, B and C storylines. These are the things executives across the board are all trained to tell the people coming up with these shows, but either no one said them to Mr. Robot creator Sam Esmail, or the man simply didn’t care to listen.

The pilot episode of Mr. Robot breaks the norm of small-screen storytelling in two major ways that ultimately work out greatly. The first is its use of voice over, which we discussed above, and the second is its singular focus on only the story of Elliot. Through these two narrative devices, the audience is given an opportunity to peer deeply into the soul of the character they’re going to be following throughout the life of the show. Regardless of what the unwritten rulebook says must be done, Mr. Robot shows off its core cast brilliantly by showing them exclusively through the eyes of Elliot in the first episode. Had it been done any other way, there’s a good chance we wouldn’t even be talking about the show on this list right now.

4) Hero, Anti-Hero or None of the Above? 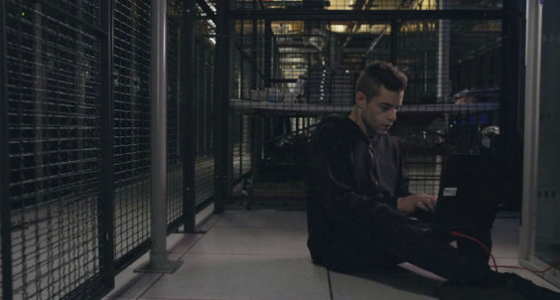 In most shows, the main character typically falls into one of two categories: hero and anti-hero. They are Oliver Queen or Walter White. Jim Gordon or Jax Teller. Phil Coulson or Dexter Morgan. Rarely, if ever, do we see the introduction of a character who doesn’t fall into either of these categories. However, this middle-ground is exactly where Mr. Robot‘s Elliot lands when it comes to decoding what makes the character tick. While he may be a vigilante hacker some of the time, Elliot isn’t a hero. He’s never seeking to foil the bad guys – as proven by his actions in a recent episode involving a jail break. He’s just a curious person with the digital means to learn everything he can about the world around him, and sometimes he uses those means to stop a crime from happening… if he feels like it.

However, this lack of moral obligation doesn’t completely make him an anti-hero either. Elliot isn’t someone falling further and further into the despair that turned Walter White from school teacher to meth cook. Rather, Elliot is just a troubled individual suffering from an extreme anti-social disorder, and that disorder puts him into a state of isolation that forces him right back into the cycle that leads to his vigilante behavior in the first place.

Sorry folks, but if you were looking for a cut and dried main character, you’ll have to look elsewhere.

5) Move Over Hackers; This Is How Tech-Talk Is Done 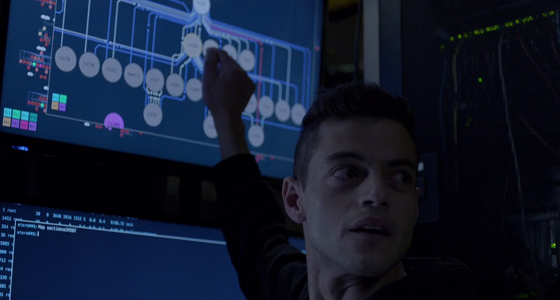 In the same episode featuring the sequence of Elliot’s withdrawal, two of the other “fsociety” hackers – as the organizations has come to dub themselves since the pilot – are seen watching a clip from the ’80s cult “classic,” Hackers, starring Angelina Jolie. Specifically, they’re watching the clip where the fictional group of that movie breaks into a virtual world via the phone line and takes Penn Jillette, of Penn and Teller fame, on a journey that ultimately leads to a tripped out game of Pac-Man. Why is this scene included? So Mr. Robot can acknowledge the realistic stupidity of it.

While a lot of its tech talk may, at times, feel foreign, it never doesn’t feel real (which many real-life individuals in the field have since confirmed the accuracy of). Through the show’s confidence, the audience understands that the way the computer techs of the series act is as real as can be – much the same way where, even though many of them aren’t in the military, the audience watching a Michael Bay movie understands that the tactics and language being utilized by military characters in his movies are as close to real life as they possibly can be. Because of this confidence to portray real life on screen whether the viewer likes it or not, it really doesn’t matter that the techno-babble, when broken down into its individual parts, doesn’t make a lick of sense to someone not in the know – because the characters rolling it off their tongues are so damn interesting to begin with. 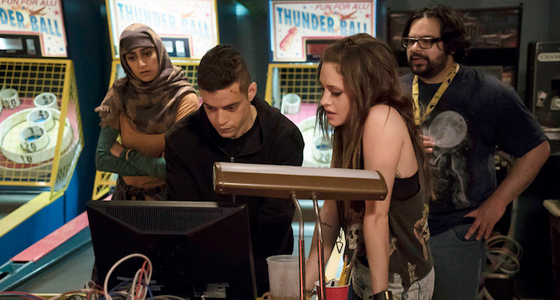 When it comes to serialized dramas likes Game of Thrones, Mad Men, Breaking Bad and Orphan Black, the thing that’s, arguably more crucial to an audience’s enjoyment of a series more than anything else is a plan. The audience wants to know that there’s some kind of a formed idea being rolled out. While that idea may change, there should at least be a sense than the writers sort of know what path they’re heading down; that we aren’t just winging the story from episode to episode. Luckily, Mr. Robot is exactly one of those shows. In fact, this is something that’s been confirmed by the creator himself.

Said Sam Esmail on twitter a few weeks ago:

@antipopculture I have an ending and it's about 4 or 5 seasons away. 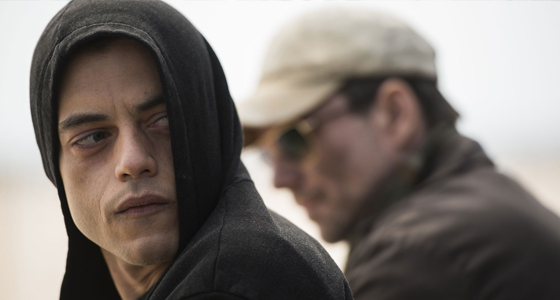 Since it began, Mr. Robot has been teasing the audience with a reveal that nodded heavily to the ideals of David Fincher’s modern classic, Fight Club – that nod being the idea that Mr. Robot is actually a figment of Elliot’s imagination. However, a recent episode of the show has given the audience a whole new set of theories, some of which are still valid with what we know, and some of which aren’t.

Regardless of the ultimate truth, though, it’s the kind of reveal that will knock anyone on their ass and make them question everything they think they know about the modern twist. Mr. Robot isn’t a show that just plays its characters with half-truths, it also plays its audience in a way that hasn’t been done in a long time – perhaps not since the heyday of M. Night Shyamalan, and that’s the greatest thing of all.

And just like that, we can rest easy knowing that the plan for Mr. Robot is clear and real. Of course, that makes sense when the development of the show was such that it originally began its life as a feature film before Esmail got 90 pages into act 1 and realized the story would be better served as a long-form television series. That fact is what also explains the earlier notes about the show breaking TV rules. A feature typically follows an A story primarily and nothing more. If the show were originally supposed to be a feature film, it makes sense why the pilot episode followed that track as well. Luckily, after the pilot came and went, there was still plenty of ground to cover, and covered it has been.