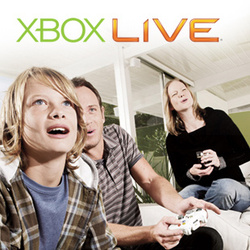 Once, long ago, console videogames were only played with multiple people when those people were physically in the same room together and likely knew each other pretty well. Now, in the 21st Century, people can play each other from the across the world and have no idea who they are playing with. Almost all of these people are insanely annoying.

Seriously, Xbox Live?the #1 online console gaming service, as Nintendo and Sony desperately make there’s far too complicated?is full of idiots, most of which are the same idiots. No matter what their screen name is, chances are you’ve heard their special brand of idiocy already. Here now are ten types of people you are guaranteed to meet on Xbox Live.

No matter what you may do, this person this person will find any reason to accuse you of being gay. Whether it be a gamertag: “Doctor Katz33? Are you like, a butt doctor? Because you are gay.” Or just playing the game: “Are you using the sniper rifle because you like to blast people from behind, fag?” Or just doing nothing whatsoever: “Hey, you! You’re gay!” He has more proclamations of homosexuality than the San Francisco Pride Parade. It would be simple to say that he’s covering up for his own sexual insecurities, but the even simpler explanation is that he’s just dumb as rocks and just likes to bother people online because most people can?t stand to be around him in real life.

2) The Manic Teen Who Loves His Own Voice

He sings! He does not stop singing! It doesn’t matter that he’s singing the Oscar Meyer theme song overly loud and off key! He’ll say a word! Doesn’t matter what word it is: doughnut, bus, solar, chocolate, whatever! He’ll just keep saying it over and over again not unlike a crazed Jack Nicholson typing away in The Shining, except without the merciful ending where he dies in the snow! No game type is safe from this crack baby with Tourette?s syndrome, whether it be Halo, Bomberman, or Joust. Trying to tell him to shut up is useless, and will only encourage him to scream like a beer-soaked fat man thrown into a fire. Your only respite is the ?mute? feature, which was invented solely for people like him. The ultimate cure for a person like this would be to allow him to speak to everyone on Xbox Live at once, at which point he have a heart attack with rapture, or just be beaten to death by most of America.

3) The Juvenile Delinquent Who Kills His Own Teammates

Ah. Aha. You?ve shot your own teammates! You keep shooting your own teammates. What a rebel. You?re like Sid Vicious for the 21st Century. It?s really clever and original. Very nihilist. Oh yes, we can hear your teenage snicker. It?s hilarious. You?re probably going to make a YouTube video later of a vinegar and baking soda bomb exploding in your hands. One wonders if people like these grow up, join the military, and are responsible for all those friendly fire accidents. One can hope that you are the only victim.

Do you have an accent or the ability to speak a different language? Then don?t speak up during an Xbox Live or you will hear the high-pitched tones of the 14-Year-Old Racist. Speak Spanish and you might hear him say ?Stupid Mexicans! Stop stealing my kills like you’re stealing our jobs, you thieving assholes!? Oh yes, the most hateful, mean-spirited words come spewing out of his mouth with a voice that sounds not even old enough to shave. Usually only appearing to play violent videogames; it is rare that you will play a game of Catan and hear him appear to say ?That?s right, build those roads, chink!? to the player who has a name that sounds vaguely Asian.

5) The Redneck Who Modded His Truck

Instead of discussing something useful over the headset, like game strategy or flag location, this person discusses the suspension lift they put on their Ford F150 extended cab. Never mind that nobody might be listening to them describing how they further added a 4.2 liter crank in the 3.8 liter block and ?Halogens that can scare the Devil,? they?ll just keep right on talking about how they spent days carefully adding coats of mica to put ghost flames on the side or how his friend had his timing chain tensioner go out on his vehicle and ?completely shot the valves straight to heck,? or how he has a Eaton M90 blower on his engine and a backglass etching of the Battle of Gettysburg. Never mind that everyone is trying to shoot space aliens with machine guns; this guy wants you to know that he is wasting his life on video games and truck at the same time.

6) The Egomaniac Teen Who Blames Everyone for Losing but Himself

Are you not winning in a team-based game? Well, it?s your fault for not listening to the video game Napoleon screeching orders. Did you not pick up the flag within 0.5 seconds of him telling you to? You are ?a moron.? Did you not get in the vehicle and drive it aimlessly to the other side of the map? You are ?a stupid idiot.? Did you not shoot that one guy, you know ?that one guy over there next to that other guy? when he told you to? Then you are ?a fucking retard.? This friendly, frustrated soul just wants to let you know that the only fun in the game is made when you win according to his impossible standards. The unfortunate part is this teen will likely grow up to be middle management at a menial corporate office job making life miserable for everyone around him. Did you not fax that report, you know, ?That one report to that company with the phone number? in the 0.5 seconds he told you to? ?You incompetent slacker. You?re not getting a Christmas bonus.?

7) The 8-Year-Old Without Enough Ritalin

A lesson that buying an Xbox 360 with an Xbox Live subscription is not a substitution for parenting this child will be in the game, running around aimlessly, shouting everything he sees, and constantly asking ?Wait, guys! What do I do? I don?t know what to do!? He?ll scream when shot then scream again to say ?Man, I got shot back there!? If he gets any sort of vehicle, he?ll drive it into a wall and shout ?Whoa! I just drove into a rocket!? You can almost visualize the moment in the future when the neglected child grows into a teen, shoots up a Denny?s with a submachine gun and his parents say ?Well, obviously it was the videogames he played.?

You can only hear half the conversation, but you know everything about what’s going on.

Found in those rare games on Xbox Live that do not involve shooting things with guns, you will find this person who will disdainfully scorn you as you play them in Chessmaster Live. ?Oh, yes, you fell right into my knight fork, that is a shame. Have you read anything about chess tactics?? Yes, you will be made to feel like a peasant even as you are dividing up lands as feudal lords in Carcacassonne. ?My, you do not know how to place farmers properly. My lead is insurmountable.? Yes, you are the bitter focal point of a grad school drop out whose only pleasure they get in life is when they best you in a game of Catan or crack open a bag of TGI Fridays Cheddar & Bacon Potato Skins to shove down their gullet. You can feel good in knowing that while you may not have the chess skills to best Kasparov Fats, you don?t stare across an empty apartment at night wondering where everything when wrong as they touch themselves inappropriately.

Yes, you will meet a girl on Xbox Live. These mythical creatures appear once every great while to barely tolerate the jerk wads who either hit on them inappropriately or put them down. Some women however, exposed enough to the relentless requests to ?Suck cock? will eventually be beaten until they start laying the smack down, putting insults across the audio spectrum like ?You should all suck my moist tit, you small dicked retards!? Eventually, any woman exposed to Xbox Live long enough without any feminine companionship to fight through the repeated idiocy will eventually be tainted by the men, emulating their worst habits until they become one of those voices on Xbox Live that is either a girl talking like a guy, or a guy who has yet to hit puberty.