By Rob Bricken and Chris Cummins

Since making its debut a decade ago, Futurama has
surpassed The Jetsons and Galaxy High School to become the funniest
sci-fi cartoon ever. Series creator Matt Groening gets the bulk of the credit
for making the show so entertaining, but Futurama‘s true strengths are
its cadre of gifted voice actors and a scary smart writing staff who can make
jokes about physics that are both funny and scientifically accurate. It’s
been well documented how Fox’s constant scheduling changes doomed the show to
an early grave. But, like Star Trek before it, fan outcry was so great
that it was given a second chance and reborn as a series of four
straight-to-DVD films. While the last of these — the recently released Into the Wild Green Yonder — offers
a fitting finale to the Futurama saga, rumblings are that we’ll be
seeing the Planet Express crew back on TV again soon. Until then, let’s check
out this list of the show’s best and worst episodes.

What it’s about: A freak microwave accident sends the Planet Express back to 1947 and Roswell, New Mexico, where Zoidberg is captured by the military and a disassembled Bender a U.F.O. As the crew tries to recover their friends, Fry tries to keep his imbecilic grandfather long enough to sire his father, which only results in home getting caught in an atomic bombs test. Fry, jubilant to find himself still existing, has sex with his grandmother in celebration, and thus becoming his own grandfather.

Why it’s great: Futurama won a few Emmy’s in its time, but “Roswell That Ends Well” won for Best Direction, and it shows. It’s fantastically paced, and Fry’s obliviously suicidal grandfather and Zoidberg’s attempt to buddy up the military (even while being vivsected) are hilarious. Plus, the reveal that Fry was his own grandfather actually becomes a major plot point in several later Futurama eps.

4) Anthology of Interest I

What it’s about: When Professor Farnsworth dusts off
the What-If Machine, Bender learns what life would be like if he were 500-feet tall (he causes mass destruction and fights a giant Zoidberg), Leela learns what life would be like if she were slightly more impulsive (she murders the entire Planet Express crew), and Fry sees what would have happened if he didn’t get frozen (he’s hit with tennis rackets by an elite nerd task force including Nichelle Nichols, Gary Gygax, Stephen Hawking and then Vice-president Al Gore, and then causes the end of the universe).

Why it’s great: Futurama‘s two “Anthology of
Interest” episodes were the equivalent of The Simpsons’ annual “Treehouse
of Horror” installments — a chance to take a break from the routine and explore
new environments and situations. All of the stories featured here are memorable,
but Fry’s adventure with Al Gore’s space/time continuum-protecting nerd team is golden, especially Gore and Stephen Hawking’s self-parodies.

3) Where No Fan Has Gone Before 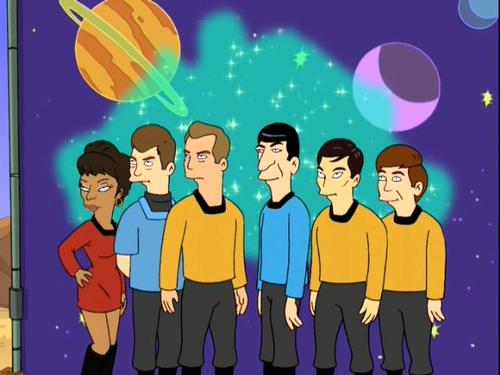 What it’s about: After learning that Star Trek is
banned in the 31st century, Fry discovers that the last-remaining
copies of the series’ episodes are located on the planet Omega 3. Crash-landing
there, he is shocked to discover that the entire original cast of the
show–except for Scotty–have been reincarnated and forced to act out their iconic
roles for the amusement of an energy being named Mellvar. When Fry challenges
Mellvar’s Trek knowledge, the stage is set for a Shatnerian smackdown.

Why it’s great: The episode stands alongside of Deep
Space Nine‘s “Trials and Tribble-ations” as a loving tribute to the first Star
Trek series. With the
exception of a couldn’t-be-bothered James Doohan and a dead DeForest Kelley,
each of the Trek cast members provided their own voices. Countless
self-effacing jokes abound, and Mellvar is a perfect riff on Trek‘s
Balok-esque villains. The episode’s moral that no show should take the place of
actually living is a sly commentary on the obsessiveness of all cult TV
fans–and a great throwback to Shatner’s classic “get a life” sketch from Saturday
Night Live.

2) Fry and the Slurm Factory

What it’s about: Fry wins a contest to visit the Slurm
factory and discovers that the secret ingredient in the highly addictive soft
drink is slime excreted by a giant worm. Yet he still can’t stop drinking it.

Why it’s great: A Willy Wonka and the Chocolate
Factory parody that also spoofs Spuds MacKenzie and Aliens, this is
the definitive Futurama episode. It’s also one of the most hilarious. Each
character gets a chance to shine here, from Professor Farnsworth’s disgust with
the Grunkla Lunkas (and their incredibly terrible songs) to Bender’s misuse of the F-ray visibility device. As for
Slurm itself, it’s the perfect drink to wash down a nice helping of Bachelor
Chow with.

Memorable quote: “Tell them I hate them!”

What it’s about: In Futurama‘s finest moment, Bender sells his body for booze money and, as a rich head, mocks his co-workers/meatbags extra hard (“Bodies are for hookers and fat people!”). But after Richard Nixon’s head buys Bender’s body to re-run as president of the United States, Bender, Fry and Leela break into the Watergate Hotel to get it back. Naturally,

Memorable quote: “Computers may be twice as fast as they
were in 1973 but your average voter is as drunk and stupid as ever. The
only one who’s changed is me. I’ve become bitter, and let’s face it,
crazy over the years. And once I’m swept into office, I’ll sell our
children’s organs to zoos for meat. And I’ll go into people’s houses at
night and wreck up the place! Muhuhahahaha!”

Hit the jump for the 5 worst Futurama episodes ever made. 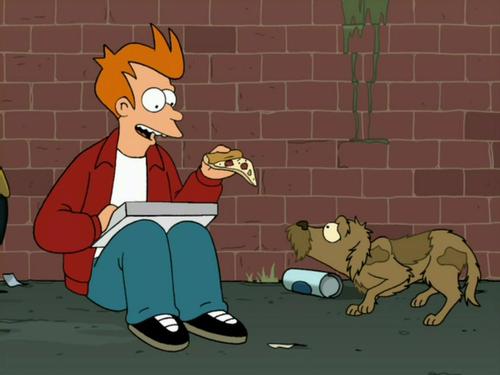 What it’s about: Fry attempts to revive the fossilized remains of his beloved dog and Bender gets jealous — leading to the most heart-wrenching denouement in animation history.

Why it’s not-so-great: Along with the similarly themed “The Luck of the Fryrish,” “Jurassic Bark” offers a poignant look at what Fry’s life was like in 1999. This episode’s dramatic elements have made it the most divisive of all Futurama outings, with some fans praising it for its heartfelt themes and others condemning it for the same reason. By having Fry’s dog Seymour die alone while waiting for his master to return, is writer Eric Kaplan commentating on the loyalty of man’s best friend or just cruelly fucking with the audience’s emotions? Feel free to debate that point in the comments.

Memorable quote: “Let this abomination unto the Lord begin!”

4) A Taste of Freedom 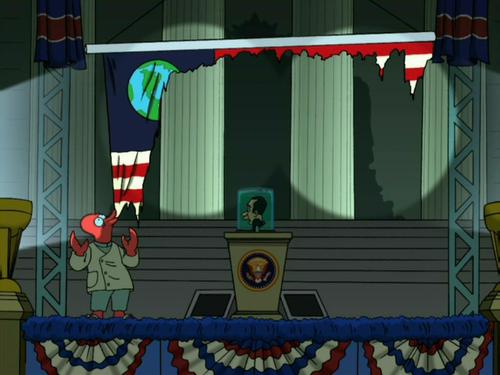 What it’s about: At a freedom rally, an as-always hungry Zoidberg eats an American flag, and is arrested for being unpatriotic. Zoidberg’s people fly to Earth and immediately conquer it, thus enslaving the human race and teaching everyone a valuable lesson about true freedom. Many flags are eaten.

Why it’s not-so-great: Zoidberg’s hilarious as a side character, but when he’s the star of his own episode? It rarely works out (see “That’s Lobstertainment!” below). He just can’t carry the plot on his carapace by himself; plus, the anti-flag-desecrating plot was already dated when this episode came out in ’98.

Memorable quote: “Hey, wait! I’m having one of those things. You know, a headache with pictures.”

3) The Route of All Evil 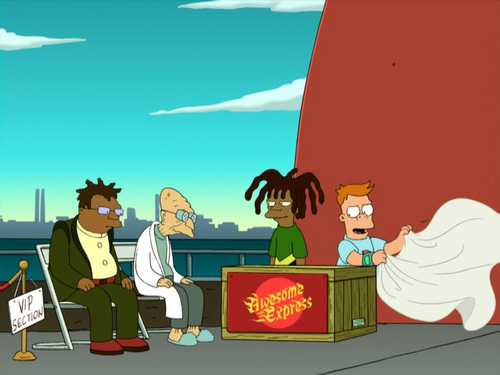 Why it’s no-so-great: He’s an inspired idea, but Cubert
never really gelled as a character and he was used too infrequently to really
catch on with viewers. So to have him paired with the equally uninteresting
Dwight results in a dull episode that leaves the main characters meandering
through a subplot involving Bender giving birth to his own brand of beer. Mmm,
Benderbrau.

Memorable quote: “Hey, hey! We can all fight when
we’re drunk!”

Why it’s no-so-great: For some reason, the writers of
the show were so enamored with Elzar that he became a recurring character. Wasn’t
Emeril Lagasse already pretty much a parody of himself? Did we really need this
four-armed purple douchebag
further poking fun at him and adding a pinch of misery to each scene
he’s in?  Like it or not, Elzar is
front and center in this episode. You’ll want to BAM your TV to make him go
away.

Memorable quote: “Pathetic humans, prepare to write down
the recipe!” 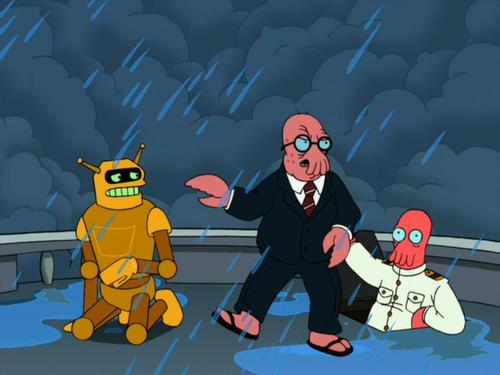 What it’s about: Dr. Zoidberg tries to jumpstart his comedy career with the help of his washed up celebrity uncle, Harold Zoid. But when robot actor Calculon agrees to finance the pair’s movie if they guarantee it will win an Oscar, they must fulfill their end of the bargain or Bender will be killed.

Why it’s no-so-great: The eternally poverty-stricken Dr. Zoidberg is a frequent scene stealer who has some of the best moments in the show’s history. For some reason though, he can’t seem to carry an entire episode. (See “Why Must I Be a Crusteacean in Love?” for another example of this). Spotlighting the one-joke Harold Zoid character and featuring yet another of the series’ too-frequent Bender-in-jeopardy subplots, this installment proves that less Zoidberg is definitely more.

Memorable quote: “They’re giving out the minor technical awards. I think they’re up to writing.”