Menu
Home
>
Daily Lists
>
The 15 Coolest Monster Toys Ever Made 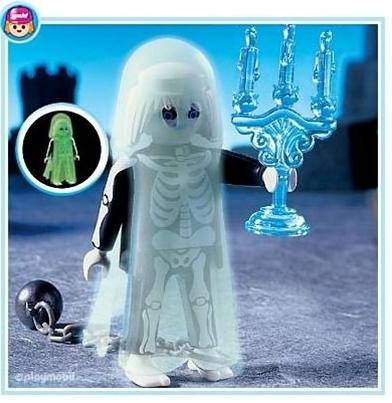 One of the reasons monster toys are so consistently popular is that they help demystify creatures that kids find terrifying. While Dracula may seem frightening on screen, he?s downright adorable as a 3 ?-inch glow-in-the-dark action figure. Over the years there have been countless toys inspired by monsters, from the 1960s Universal Monsters model kits to the Mego/Remco action figure lines of the 1970s/early ?80s, and beyond. With all of these playtime options to choose from, which ones possess the most fun and thrills? Find out in this (somewhat) super-sized list that features 15 of the niftiest monster-related toys ever to hit store shelves.

The most famous of all of the Six Million Dollar Man?s foes, Bionic Bigfoot was actually an alien robot designed to look like a Sasquatch. Pretty lame, huh? His dubious origins aside, there really are few things in life that as satisfying as watching a bionic fight between man and beast. The furry character proved so popular that he spawned two action figures of his own: a 15-inch version with a removable chest plate and the amazing 3 ?-sized one that came packed in the TTP Dual Launch Drag Set. This toy let kids drag race Steve Austin against the Bionic Bigfoot in futuristic motorcycles that run off of air pumps. Although in my mind, the pair called a truce and partied the night away at the Creature Cantina. 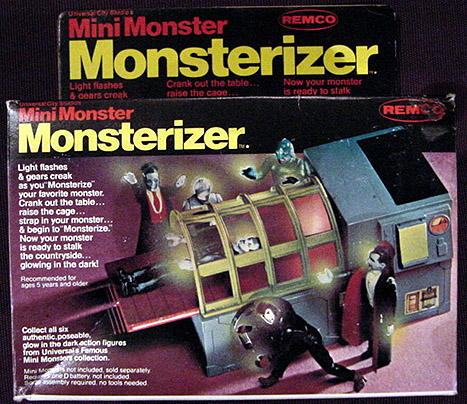 The first of several Remco toys on this list, the Mini Monster Monsterizer gave kids the opportunity to play mad scientist. The playset featured a hand crank that moved the figure into position as well as a snap down cage and flashing lights that could be activated at the flip of a switch. Although this toy was intended for use with Remco?s glow-in-the-dark Universal Monster figures, many kids pretended it was a torture device that Han Solo could use on Greedo. Or at least I did. 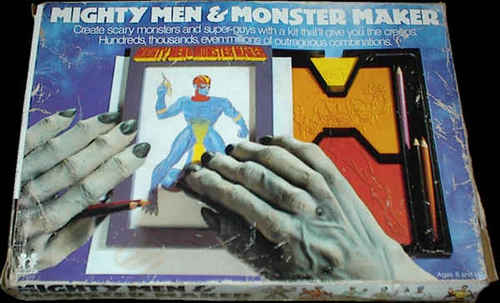 A simple spin on the Fashion Plates concept, Tomy?s Mighty Men and Monster Maker was a drawing toy that let kids mix together tiles featuring various body parts to create their own creatures. Once their monster masterpiece was assembled, they could transfer it to paper and hang it on the fridge. Theoretically, this could be used to make heroic characters too, but where?s the fun in that?

Madballs were the perfect toys for kids who?d rather watch The Texas Chainsaw Massacre than have a catch with their dad. One of the eight original Madballs, Skull Face was nothing more than a disembodied head that you could throw around for hours until G.I. Joe came one. He was magnificent. Here are three things I learned about Skull Face from personal experience.
? It doesn?t hurt too much when he hits you in the testicles.
? He really pisses teachers off.
? Playing with him almost counts as showing an interest in sports if you otherwise can?t be bothered. 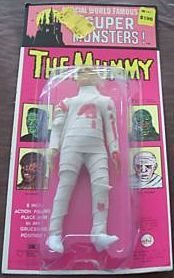 Hailing from AHI?s Official World Famous Super Monsters line, this Mummy figure features a nicely deformed head and some blood-soaked bandages. Back in the ‘0s, this sort of toy dementia was everywhere (i.e. Kenner?s horrific Hugo disguise puppet). Go to your local Toys ?R? Us today and you?d be hard-pressed to find any monster toys, let alone ones caked with their own leaking plasma. So how exactly are we progressing as a society? 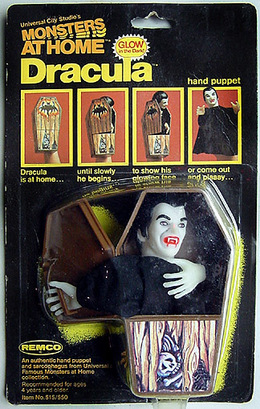 Long before Forgetting Sarah Marshall, Dracula puppet shows were held in homes across the nation with the release of this toy in 1981. Packaged in a coffin which he could crawl out of, Drac here was the highlight of Remco?s line of officially sanctioned Universal Monster puppets. While he may look nothing like his cinematic counterpart, he trumps Bela Lugosi by having a head and hands that glow in the dark.

Lego may have all the big licenses, but Playmobil has the style. Case in point, this little fella. Nothing more than a skeleton wearing a glow-in-the-dark ghost suit, this figure?s appearance on this list raises a controversial question: are ghosts monsters? While you debate this in the comments, I?m gonna stare at him some more. Aww, he even has a little ball and chain. Adorable. 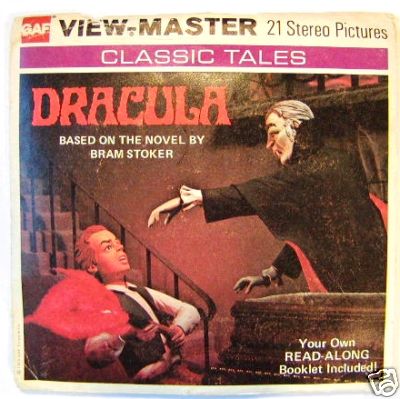 Part of the Classic Tales line that also included The Wolf Man and Frankenstein, this View-Master offering captures the essence of Bram Stoker?s novel. Featuring 3-D photos of intricately designed models, this set is a perfect example of the View-Master?s ability to tell a story using only imagery. It comes with an included book that lets kids read a truncated version of the tale, but the words have nothing on the visuals. 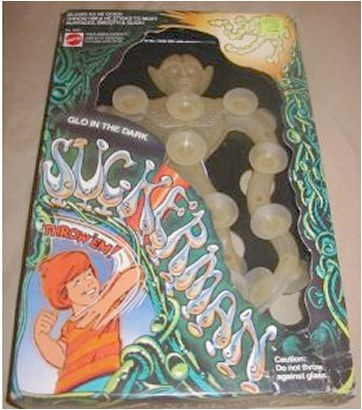 A bizarre vampire/alien hybrid, Suckerman was a creature made out of soft vinyl that had suction cups positioned throughout his body that would let him stick to whatever surface he was thrown at. Created by Mattel in 1978 in black, red, green and glow-in-the dark variations, Suckerman enjoyed a brief revival in 2001 when Basic Toys released a new version that was made from the original mold. Since then, he?s been spending his time in retro toy purgatory anxiously awaiting his next opportunity to take over the world, one mirror or window at a time. 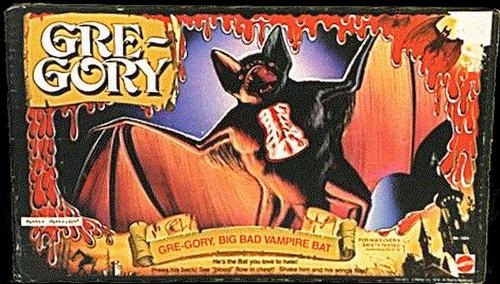 Mattel?s ?Big Bad Vampire Bat? may not possess the greatest playability factor, but he more than makes up for it with his appearance. What differentiates Gre-Gory from every other toy bat is a chest cavity that fills with bloodlike red liquid when you push on his back. If you do that when your finger (or you favorite action figure) is jammed in his mouth, pure toy bliss ensues.

5) The Creature from the Black Lagoon Aurora Model

Throughout the 1960s, Aurora Plastic Corporation?s various model kits let kids assemble, glue and paint their favorite film monsters. With outstretched arms reaching for another victim, the Gill Man here has been a fan favorite since his initial release in 1963. FYI?there?s a swimming Creature from Aurora?s fabled Monsters of the Movies line that is nearly impossible to find. Model nerds will tell you that kit is better. They lie.

Honestly, I can?t believe they actually made a commercial for this. Easily the most notorious action figure ever released, Kenner?s 18-inch Alien figure horrified both parents and children when it was released in 1979. You can rest the blame on the shoulders of Kenner?s licensing department, who clearly thought that they had another Star Wars-esque romp on their hands as opposed to the R-rated stomach churner that was Alien. Of course now we all realize what a marvel this figure truly is. It?s a shame we didn?t possess such wisdom back when they couldn?t give it away. 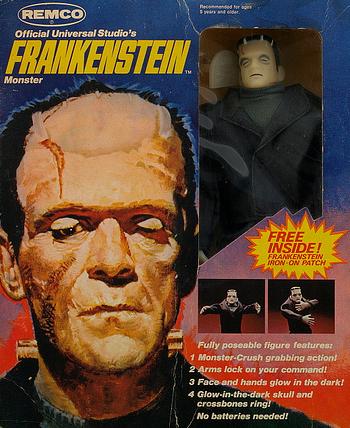 The box for Remco?s classic toy says that he has ?monster crush action.? But baby, the only monster crush he has is on you. This single softie is looking for someone?s arms to run into after a long day of being chased by villagers. He?s into taking slow walks, gardening, sitting lakeside and giving intense hugs. His dislikes include windmills and humanity. He?s nine inches of plastic paradise waiting for your love.

The only thing Stretch Monster hated more than his enemy Stretch Armstrong was being pulled apart by overzealous brats. As wonderful as this toy was, it was far to delicate to actually be played with for long periods of time. Invariably, your green pal would begin to ooze syrup blood and soon he?d be headed for the trash can. Despite his weaknesses, Stretch Monster has become a hero to obscure toy fans across the globe thanks to his good looks and his dedication to destroying that pompous Armstrong jackass.

The ?King of the Monsters? also ruled over toy stores when this massive 19 ?-inch figure was released in 1978 as part of Mattel?s Shogun Warriors line. Thirty years later and no other monster toy comes close in terms of replay value and sheer beauty. Long after aliens wipe out mankind, they?ll sift through Earth?s remains and discover this beauty in the rubble of a toy collector?s trailer home. It?s then they?ll realize that maybe humanity wasn?t so bad after all.