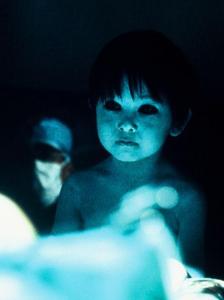 Ghosts are a hard sell in the movies. Unlike city-stomping Cloverfield monstrosities or ennui-dripping vampires, ghosts establish horror primarily through deftly built atmosphere and sudden, immaterial shocks. Anyone can direct a flick about a rampaging Italian octopus-shark, but it takes some talent to pull off the mood and subtlety needed for a good, harrowing ghost movie.

For example, none of the following films could do it. In one way or another, they and their ghosts failed to properly scare us. And that?s an unforgivable offense when it comes to any movie about ghost, poltergeists, or angry will-o?-the-wisp things. Most alleged comedies like Ghost Dad are off the hook, of course. We?re after the movies that were supposed to scare us.

8) Karl Hochman, Ghost in the Machine

You could throw Ghost in the Machine under the same embarrassing ?techno-thriller? label that includes Hackers and The Lawnmower Man, but it?s still something of a ghost story. That ghost is the restless spirit of serial killer Karl Hochman, who?s transmuted into a hospital computer during a power spike. Roaming through dishwashers and pool cleaners, he takes aim at his next victim (Karen Allen, who was nearly halfway between Raiders of the Lost Ark and Kingdom of the Crystal Skull) and her family. It?s a film that taps into our primal fear of finding an electric murderer in the microwave.

Perhaps Ghost in the Machine was a cautionary tale about ever-present technology, because it really doesn?t work as a horror movie. Karl?s lines are too clich? to make him a memorable lunatic, and his habit of stalking people through traffic lights and dated virtual reality games makes the movie seem more low-budget than it probably was. For a cogent example of just how scary Ghost in the Machine is, head over to its IMDB message boards, where the most intense discussion about the movie focuses on the babysitter?s boobs double.

Much like the 1999 Godzilla film, The Grudge proved that what works in a Japanese movie might not work in an American remake. Granted, the original The Grudge (or Ju-On) was, like Godzilla, nearly an unintentional comedy, but director Takashi Shimizu seemed to get even goofier when he put together an Americanized version of his first Ju-On film. Part of the problem lies with Sarah Michelle Gellar, who bravely refuses to act despite the ghosts hounding her during a trip to Japan.

Another problem? That little ghost boy with the all-black eyes seems less a frightening specter and more like a kid who just wants to show Gellar his Pok?mon cards. When he?s watching an elevator-riding Gellar from each floor of a building, it?s pretty easy to imagine him squeaking ?Hi!? with each level. And when he meows like a cat, it pretty much seals the comedy deal.

As paranormal weirdness goes, the world of electronic voice phenomena ranks down there with ball lightning and crop circles that spell dirty words. Sure, it?s creepy to think that the voices of the dead can be heard through static, but just about everything allegedly said by these spirits needs to be subtitled for us, lest we think that the microphone picked up a stray line from Law & Order. So when Brightlight Pictures approved a movie based on EVP, that movie required something scarier than low-pitched feedback that might be some deceased old lady asking about her cats.

White Noise didn?t get that. It got some half-glimpsed apparitions and three phantoms that, like some M. Night Shyamalan version of Casper?s ghostly trio, bring about the deaths of people surrounding Michael Keaton, who scares us mostly because of the idiotic way his character confronts the situation. Like a lot of ghosts, the three spirits can?t really do anything but hound people to the point of accidental suicide, and the movie needs a crazed human killer to do its really dirty work. No wonder they?re not in the trailer.

The original Ghostbusters wasn?t a horror movie, and yet there?s no denying that the library ghost and Gozer?s hideous demon dogs scared more kids than either Critters film or the talky parts of Rosemary?s Baby. Ghostbusters II fell short of the first in many ways, and its biggest problem lay in the lack of an imposing villain. Instead of an ancient Hittite god and his/her slavering death-hounds, the Ghostbusters faced down?an evil painting.

Okay, so he?s really a medieval tyrant called Vigo the Carpathian, and his canvas-bound spirit had a mountain of evil slime on his side. But when it came to terrifying younger viewers well into their nightmares, Vigo just sorta sucked. Throughout most of the film?s climax, he simply skulks around and doesn?t even get monstrous until his final moments. He?s even lame in the Ghostbusters II game for the NES.

We?ll give Ghost Ship some credit for kicking things off by slicing an entire ballroom of partygoers in half with a stray wire. The rest of the movie?s a downhill slope, as a crew of easily killed-off salvagers boards an Italian liner that mysteriously vanished back in the ?60s. With most of their demises guaranteed by clich?, Ghost Ship speeds into action-movie territory at the expense of any real scares. The movie conjures up what few memories we have of Virus, and it?s easy to blame the same school of filmmaking that gave us the Resident Evil films. This school tells that any backstory is best conveyed as a music video, one that?s graphic but too MTV-friendly to be scary.

A strangely sedate ghost girl follows the film?s certain-to-survive heroine (ER escapee Julianna Margulies), but the real villain is an otherworldly soul broker who?s posing as Jack Ferriman, a member of the salvage crew (Ferry Man, get it?). In other words, it?s not the ship?s fault that it?s full of ghosts, and, contrary to the movie poster?s skull-faced ship, the ship itself isn?t evil. What a rip-off.

3) Kane and his Minions, Poltergeist III

As with the Jaws franchise, Poltergeist went from a genuinely creepy and highly profitable initial film to an average follow-up and a clunker of a third film. Poltergeist III sadly borrows less from the first flick and more from the second, which retconned in some evil subterranean cult leader named Kane to take the place of the first film?s Native American burial ground. Still, the second film at least had scenes of Craig T. ?Coach? Nelson barfing up the new villain?s worm-like form. The third movie loses all of the Poltergeist characters except for Heather ?Carol Anne? O?Rourke and the little weird-voiced lady.

The film brings back Kane and his attendant ghosts (yes, poltergeists are close enough), but they simply aren?t memorable, relying on weird fake-outs and weirdly funny moments, such as the scene of our young heroine?s cousin getting pulled into another dimension. And, for a final annoying touch, Tom Skerritt and the rest of the cast can?t just call her Carol.

Aptly enough, Poltergeist III is less interesting than the stories around it. During filming, O?Rourke became the fourth Poltergeist cast member to die, and the movie?s setting, the John Hancock Center in Chicago, has long been the source of ghost stories far more creepy than Poltergeist III.

The original 13 Ghosts was a campy 1961 flick, remembered mostly for giving audiences special ghost-viewers that made the spirits easier to see (or harder, depending on your faith in the supernatural). The 2001 remake, with its annoying title, has no such enhancements.

We should point out that the specters of Thir13en Ghosts are nicely outfitted in the make-up department and would be frightening in a genuinely scary movie. This isn?t one of those. It?s just a bore that flickers between an unsubtle horror film and some bizarre Disney Channel time-killer. A harried Tony Shalhoub and his children are trapped in his late uncle?s house, a glass-walled deathtrap powered by a ghostly machine. It?s the sort of film incoherent enough to show a thieving lawyer sliced in half, height-wise, early on, and then, 45 minutes later, launch a plot point about how a ghost created out of loving sacrifice could short-circuit Uncle Creepy?s ghost engine.

1) The Cardboard Ted Danson, Three Men and a Baby

No one?s sure who started the rumor, but it spread like a virus through playgrounds and slumber parties everywhere in the late 1980s. A few months after Three Men and a Baby hit home video, just about every kid in America knew that there was a ghost in it. A real ghost, since the movie was a canned little comedy that most kids would otherwise watch once and forget. And it wasn?t just a vague white blur. No, if you watched a closet that Ted Danson?s character and his mother walked in front of, you?d get a darn good look at the lingering spirit of a boy who?d committed suicide in the apartment where the movie was filmed.

This wasn?t some playground legend about pop rocks or microwaved poodles. This was verifiable cinematic fact. The Internet was still in its cocoon and 60 Minutes wasn?t about to cover urban legends, so there was no one to tell children that the movie?s ghost was just a cardboard stand-up of Ted Danson and that the scene was shot on a sound stage. Really, it?s so obvious now; the ghost looks flat and featureless, and without a room of fellow 10-year-olds to share the delusion, what once was unbelievably eerie becomes the most disappointing ghost in movie history.